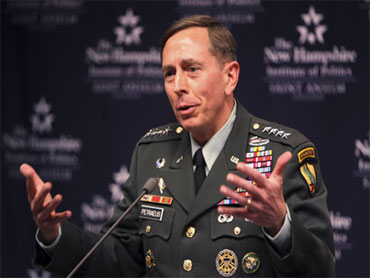 President Obama today replaced Gen. Stanley McChrystal with Gen. David Petraeus, one of the few generals believed to be capable of smoothly taking over the war in Afghanistan.

The war effort was complicated this week by the release of a shocking article in Rolling Stone magazine in which McChrystal and his staff members made a number of derisive comments about the Obama administration. By putting Petraeus in charge, however, Mr. Obama reaffirmed his commitment to a war strategy that Petraeus played a central role in shaping.

The 57-year-old general, as the head of U.S. Central Command, was McChrystal's boss and oversaw both the wars in Afghanistan and Iraq. Before taking that role, he served as the top coalition commander in Iraq, where he won wide praise for overseeing the "surge" strategy. The strategy was perceived as a success as violence fell in Iraq and the U.S. was able to develop its plans for leaving the country.

Petraeus' high-profile career has made him one of the most well known generals of his generation and a recipient of widespread praise. He has been considered a strong candidate to be the next chairman of the Joint Chiefs of Staff, and some have speculated that he will run for president.

Petraeus has denied having any presidential ambitions -- although he was once a registered Republican, Petraeus emphasizes his independence and says he has not voted in years.

Still, few probably expected Petraeus to be taking what is technically a demotion. As the leader of U.S. Central Command, Petraeus oversaw American military activities in nearly 20 countries spanning a region, from Egypt to Kazakhstan. He will step down from that role to focus on leading the U.S. forces in Afghanistan.

"It should be clear to everybody he [takes the job] at great personal sacrifice to himself and to his family," Mr. Obama said of Petraeus today. "And he is setting an extraordinary example of service and patriotism by assuming this difficult post."

The new position will no doubt take a large toll on Petraeus, who last week briefly fainted during a congressional hearing because, he said, of dehydration. The general is no stranger to physical hardship, however. He was treated for prostate cancer last year, and days after being accidentally shot in the chest in 1991, he did 50 push ups to demonstrate his well being.

Petraeus not only brings physical stamina and on-the-ground experience to the job, but also an elite educational background. He received a bachelor's degree from the U.S. Military Academy at West Point, as well as a PhD in international relations from Princeton.

"The president has taken the crisis in the Rolling Stone article," Sen. Joe Lieberman (I-Conn.) said on MSNBC, "and turned it into a decisive show of presidential leadership."