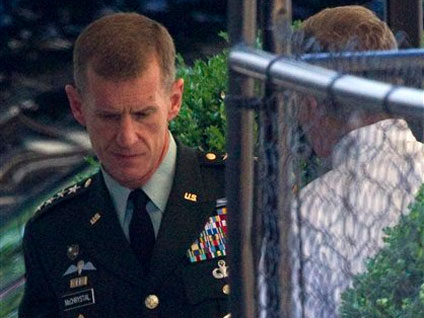 Gen. Stanley McChrystal was ousted by President Obama on Wednesday as the top U.S. general in Afghanistan.

Following Mr. Obama's Rose Garden remarks announcing the move, McChrystal released a statement saying he still "strongly" supports the mission in Afghanistan and that he resigned "out of respect for this commitment" and "a desire to see the mission succeed."

The full statement is below:

This morning the President accepted my resignation as Commander of U.S. and NATO Coalition Forces in Afghanistan. I strongly support the President's strategy in Afghanistan and am deeply committed to our coalition forces, our partner nations, and the Afghan people. It was out of respect for this commitment -- and a desire to see the mission succeed -- that I tendered my resignation.

It has been my privilege and honor to lead our nation's finest.