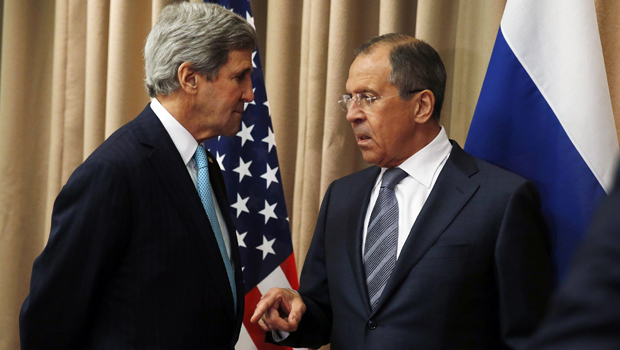 The tentative agreement puts on hold - for now at least - additional economic sanctions the West had prepared to impose on Russia if the talks were fruitless. And that will ease international pressure both on Moscow and nervous European Union nations that depend on Russia for their energy.

Reached after seven hours of negotiation in Geneva, the agreement requires all sides to refrain from violence, intimidation or provocative actions. It calls for the disarming of all illegally armed groups and for control of buildings seized by pro-Russian separatists to be turned back to authorities.

U.S. Secretary of State John Kerry told reporters that in one eastern Ukrainian city notices were sent to Jewish people saying that they had to identify themselves as Jews "or suffer the consequences."

"In the year 2014, after all of the miles traveled and all of the journey of history, this is not just intolerable; it's grotesque," said Kerry. "It is beyond unacceptable, and any of the people who engage in these kinds of activities - from whatever party or whatever ideology or whatever place they crawl out of - there is no place for that."

Jewish community leaders in the eastern Ukrainian city of Donetsk told the Washington-based National Conference Supporting Jews in Russia, Ukraine, the Baltic States and Eurasia that the flyers were "a provocation" and that "all authorities have denied any connection to the flyers."

"That kind of behavior, that kind of threat, has no place," Kerry said.

Kerry called the deal the result of a "good day's work" but emphasized that the words on paper must be followed by concrete actions. He said he had warned Russian Foreign Minister Sergey Lavrov that Moscow would soon feel the brunt of new sanctions should it not follow through on its commitments under the agreement.

"It is important that these words are translated immediately into actions," Kerry said at a news briefing. "None of us leaves here with a sense that the job is done because of words on a paper."

He added that if Moscow does not abide by the agreement, something that would be clear in the coming days, "we will have no choice but to impose further costs on Russia."

In Washington, President Obama conveyed skepticism about Russia's promises and said the United States and its allies are ready to impose fresh sanctions.

"My hope is we do see follow through," Mr. Obama said at an impromptu news conference at the White House.

"The question now becomes, Will they use the influence they have used in a disruptive way so that Ukrainians ... can start back on the road to prosperity and democracy," the president said.

Mr. Obama did not say what additional sanctions might be in the offing if commitments made by Lavrov do not materialize.

On Wednesday, the president expressed a similar sentiment in an interview with CBS News.

"Each time Russia takes these kinds of steps that are designed to destabilize Ukraine and violate their sovereignty, there are going to be consequences," Mr. Obama told CBS News chief White House correspondent Major Garrett before referring to Russian President Vladimir Putin. "Mr. Putin's decisions aren't just bad for Ukraine. Over the long term, they're going to be bad for Russia."

The agreement also gives amnesty to protesters who comply with the demands, except those found guilty of capital crimes.

Monitors with the Organization of Security and Cooperation in Europe will be tasked with helping Ukraine authorities and local communities comply with the requirements outlined in the agreement.

It said Kiev's plans to reform its constitution and transfer more power from the central government to regional authorities must be inclusive, transparent and accountable - including through the creation of a broad national dialogue.

Earlier, Putin criticized the U.S. and its European allies for having what he called a double standard concerning Ukraine and said he hoped he would not have to deploy troops to Ukraine.

But he also seemed to keep the door open for Russia to recognize Ukraine's presidential election set for May 25, softening his previous demand that it must be postponed until the fall and preceded by a referendum on broader powers for the regions.

Andrii Deshchytsia, Ukraine's foreign minister, said the "joint efforts to launch the de-escalation ... will be a test for Russia to show that it is really willing to have stability in this region."

Ukraine was hoping to use the Geneva talks - the first of their kind over the crisis that threatens the new government in Kiev - to placate Russia and calm hostilities with its neighbor even as the U.S. prepared a new round of sanctions to punish Moscow for what it regards as fomenting unrest.

Meanwhile, Russia was honing a strategy of its own: Push the West as far as possible without provoking crippling sanctions against its own financial and energy sectors or a military confrontation with NATO.

In a television appearance in Moscow on Thursday, Putin denied claims that Russian special forces were provoking unrest in eastern Ukraine. He called the Ukrainian government's effort to quash the unrest a "crime."

In Washington, Defense Secretary Chuck Hagel said the U.S. would send non-lethal assistance to Ukraine's military in light of what he called Russia's ongoing destabilizing actions there. He told a Pentagon news conference that the military assistance to Ukraine will include medical supplies, helmets, water purification units and power generators.

Ukraine has asked for military assistance from the U.S., a request that was believed to include lethal aid such as weapons and ammunition. Obama administration officials have said they were not actively considering lethal assistance for fear it could escalate an already tense situation.

The U.S. has already sent Ukraine other assistance, such as pre-packaged meals for its military.

In Brussels, NATO chief Anders Fogh Rasmussen said the military alliance would increase its presence in Eastern Europe, including flying more sorties over the Baltic region west of Ukraine and deploying allied warships to the Baltic Sea and the eastern Mediterranean. NATO's supreme commander in Europe, U.S. Air Force Gen. Philip Breedlove, told reporters that ground forces also could be involved at some point, but he gave no details.