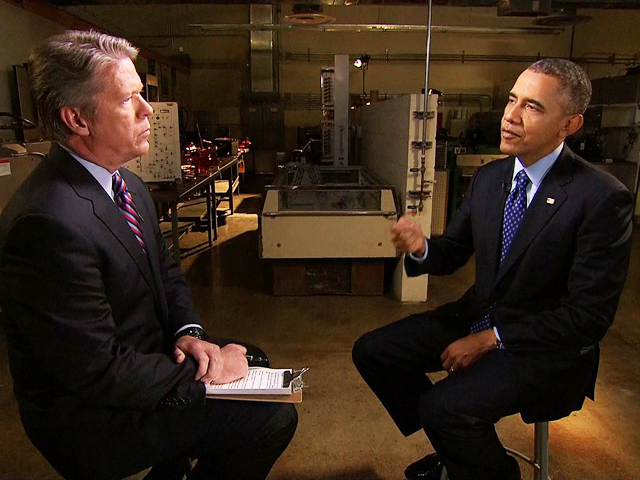 President Obama put Russian President Vladimir Putin on notice Wednesday evening, warning that further actions to destabilize the interim Ukrainian government will result in consequences from both the United States and Europe.

In an interview with CBS News White House Correspondent Major Garrett , Mr. Obama said it was "absolutely clear" that Russia had violated Ukraine's sovereignty and territorial integrity by annexing Crimea last month, and they continue to do so by supporting "non-state militias" in southern and eastern Ukraine.

Still, the White House has not abandoned diplomatic solutions. Secretary of State John Kerry traveled to Geneva Wednesday evening to prepare for four-party talks with European, Russian and Ukrainian officials. Ukraine is willing to offer amnesty to the armed separatist groups who have carried out violence and seized buildings in the east, if Russia agrees to pullback support for those pro-Russian groups and withdraw the 40,000 troops that it has positioned on Ukraine's border, CBS News State Department Correspondent Margaret Brennan reports.

Although the president did not definitely say whether Russia would face further sanctions if the meeting failed, he said, "What I've said consistently is that each time Russia takes these kinds of steps, that are designed to destabilize Ukraine and violate their sovereignty, that there are going to be consequences."

The executive order Mr. Obama signed in late March gives the administration broad authority to expand sanctions targeted at Russian officials and businessmen, as well as the ability to target entire sectors of the Russian economy including financial services, metals and mining, energy, defense and related material, and engineering.

Despite rising tensions in the region - including a Russian jet that made a pass at a U.S. Navy destroyer patrolling the western Black Sea earlier this week - the president is convinced Russia is not looking for a military conflict.

"They're not interested in military confrontation with us; we don't need a war," he said. "What we do need is that countries like Ukraine can have relationships with their neighbors."