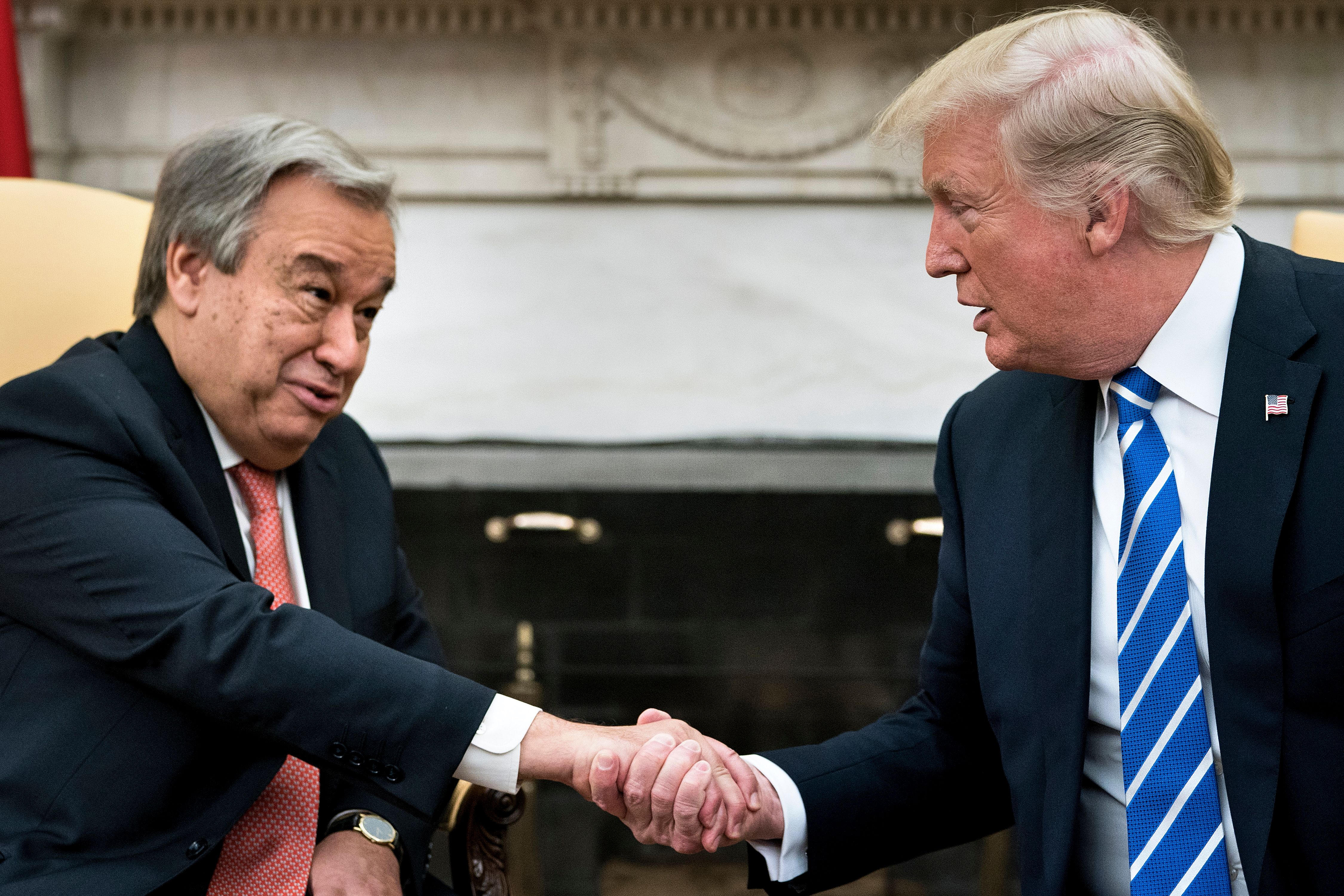 UNITED NATIONS -- U.N. Secretary-General Antonio Guterres had his first extended bilateral meeting in the Oval Office with President Trump on Friday in what appeared to be a friendly encounter, despite the president's disparagements of the international body during his campaign.

"I have a feeling that things are going to happen with the United Nations like you haven't seen before," Mr. Trump said Friday.

The president praised U.N. envoy Nikki Haley - who is to depart for an Africa trip Monday -- and made a point to say that the U.N. has "tremendous potential."

Guterres' office said the leaders "committed to work together to address these and other common challenges in the coming months."

"The Secretary-General and the President discussed UN effectiveness and reform, as well as global issues of mutual concern, including Myanmar, the tensions on the Korean Peninsula, the situation in the wider Middle East, and the fight against global terrorism," his office said in a statement.

Reform at the U.N. has been a priority for both Mr. Trump and Guterres, highlighted last month on the eve of the annual U.N. General Assembly in a U.S.-sponsored event at which the president, the secretary-general and Haley sat side by side.

At the Sept. 18 meeting, aimed at supporting Guterres' reform agenda, the U.N. chief thanked Haley for "her leadership, her partnership and her commitment," saying the global body's bureaucracy and endless red tape keep him up at night.

Before Mr. Trump spoke at the U.N., Guterres kicked off the annual debate by warning that people are living in "a world in pieces," with some very thinly veiled jabs at Mr. Trump's efforts to solve the biggest problems on the planet.

Guterres and Mr. Trump have been at odds on a range of issues including climate change and the recent U.S. withdrawal from UNESCO as well as budget cuts, North Korea and Iran. But at each of the meetings the two leaders have had – in April at the White House, in September at the U.N. – the appearance is of two leaders who can work together on a reform agenda, cutting unneeded bureaucracy.

At the U.N., Haley has accused the world body of being biased against Israel; relations between the U.S. and Israel have been at a high point since President Obama left office.

On Friday, after reporters took photos of the two leaders, Mr. Trump did not answer questions about a U.S. military operation in the African nation of Niger that left four U.S. soldiers dead.

But in his comments to reporters, Mr. Trump told Guterres: "I just wish you luck because the potential that you have is really unlimited. Good luck."

Guterres responded, "I need all the luck."

Mr. Trump then replied to laughter: "You need luck, and you need talent, OK? You need talent, and he's got the talent. Now, we'll see what happens. I'll report back to you in about seven years what I think."