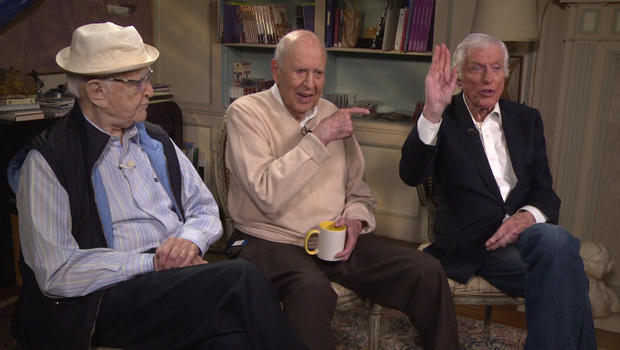 HEADLINES: London attacks (Video)
Last night's terror attacks on and near London Bridge, in which seven people were killed, was the third attack in the U.K. in three months. British Prime Minister Theresa May condemned the violence, saying, "It's time to say, enough is enough." Elizabeth Palmer and Charlie D'Agata have the latest.

COVER STORY:  36 years and counting: AIDS in America | Watch Video
In 1981 an infectious disease researcher at the National institutes of Health started noticing reports that clusters of gay men were being diagnosed with infections that were highly unusual in younger people. It would take a few years before the medical community identified HIV which, left unchecked, can develop into the deadly syndrome known as AIDS.

Today, treatments and preventive measures have changed expectations about the disease -- and, in the eyes of some, caused undue casualness about prevention. Rita Braver reports.

FROM THE ARCHIVE: Charles Kuralt on shopping carts (Video)
Charles Kuralt went "On the Road" to Oklahoma City, where he met Sylvan Goldman, famed for having invented the ubiquitous grocery store shopping cart in 1937. Originally broadcast on CBS News' "Who's Who" on January 11, 1977.

ART: Kerry James Marshall | Watch Video
Kerry James Marshall's trademark style has catapulted him into the stratosphere of the art world. A 35-year retrospective featuring 72 of his works is now at the Museum of Contemporary Art in Los Angeles. His figures aren't just black; they are jet black -- bold, proud, undeniably black. And while his work may deal with grief, injustice and loss, for the most part Marshall focuses on everyday life: picnics and street scenes, daily rituals, and quiet moments -- a window into a world rarely represented in fine art.

"We're used to hearing narratives of trauma, tragedy, disenfranchisement, pain, suffering," Marshall told correspondent Alex Wagner. "Few of the stories that normalize the everyday life of people who are not always experiencing trauma 24/7. And I think those things need to be represented as well as anything else that we read about in the newspaper or we see on the news."

ON BROADWAY: "A Doll's House, Part 2" | Watch Video
When last we left off with Nora Helmer in Henrik Ibsen's landmark 1879 drama, "A Doll's House," she had had an awakening -- and exited her marriage and family with the slam of a door. Now she's back, in the Tony-nominated "A Doll's House, Part 2."  Mo Rocca talks with playwright Lucas Hnath and the cast (including Laurie Metcalf, Chris Cooper and Jayne Houdyshell) about this continuation of the story of a woman awakened, and the mess she left behind in her journey toward self-discovery.

THIS AND THAT: Legal cookies and more (Video)
"Sunday Morning" follows up on recent stories and viewer mail - from a recent court decision about a Wisconsin law that prevented home bakers from selling homemade cookies, to reaction to our recent "Almanac" on author Ian Fleming. Jane Pauley reports.

HARTMAN: A 99-year-old usher (Video)
Phil Coyne may be a bigger celebrity than anybody on the field at PNC Park in Pittsburgh. The 99-year-usher has been working Pirates games since he was a kid, and is not about to stop any time soon, as Steve Hartman reports.

WEB EXTRA: Norman Lear on casting Archie Bunker (Video)
In this web exclusive, legendary TV producer Norman Lear tells Tracy Smith about what happened when, during his search for an actor to star in his classic sitcom "All in the Family," he came up with the idea of Mickey Rooney.

COMMENTARY: Too many exclamation points!!! | Watch Video!!!
"Sunday Morning" contributor Faith Salie says the escalation in exclamation needs to be taken down a notch. Period.

MUSIC: Roger Waters: Still tearing down walls | Watch Video
The former member of the rock group Pink Floyd kicked off his latest solo tour this week. The "Us + Them Tour" is as spectacular and technically challenging as his previous concerts -- and it may be the 73-year-old musician's last lap.

Roger Waters talks with correspondent Anthony Mason about his history with Pink Floyd, going solo, and the value of protest music.

WEB EXTRA VIDEO: "Another Brick in the Wall"
Performed at the start of Waters' "Us + Them Tour" in Kansas City, May 26.

To hear "Déjà vu," from Waters' new album, "Is This the Life We Really Want?," click on the video player below.

CALENDAR: Week of June 5 | Watch Video
"Sunday Morning" takes a look at some notable events of the week ahead. Jane Pauley reports.