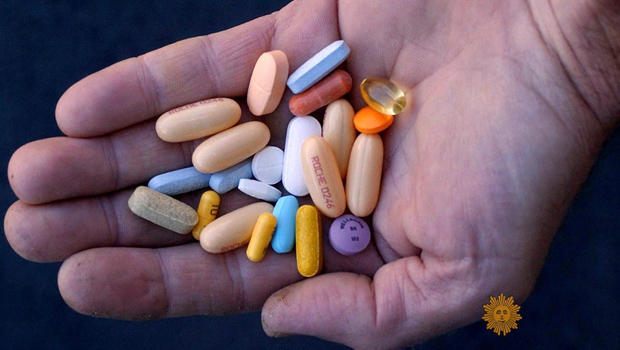 Thirty-six years: That's how long it has been since AIDS first caught the attention of public health officials. Though modern medicine has done much to control the disease, the battle against it is far from over. Our Cover Story is reported by Rita Braver:

When 31-year old Dean Carras hits the bars, and maybe strikes up a new relationship, he has a level of confidence that wouldn't have been possible just a few years ago. That's because Carras, who is HIV negative, begins his day with PrEP (short for Pre-exposure Prophylaxis), which reduces the risk of sexual transmission of HIV -- the virus that can lead to AIDS -- by more than 90 percent.

"I don't want to sound cynical, but I don't have to trust somebody 100 percent, because I know for myself that I am protected," Carras said. "I come from a generation where condom use was 100 percent; that was safe sex. If you said safe sex, that meant you used a condom."

"You can kind of remove that layer of protection if you want to and know that you're not going to become HIV positive."

Carras, who gets a check-up every three months, says he is well aware of how much has happened since June of 1981. That's when an infectious disease researcher at the National institutes of Health first started noticing reports that clusters of young gay men were being diagnosed with infections that were highly unusual infections.

"It became clear to me that even though we did not know what this was, it almost certainly was a sexually transmitted infection," said Dr. Anthony Fauci.

It would take a few years before Dr. Fauci and colleagues in the international medical community would identify HIV, which, left unchecked, can develop into the deadly syndrome known as AIDS, which destroys the human body's resistance to infections.

Doctors learned that HIV could be transmitted through blood transfusions, and that women can get HIV and pass it on to babies in the womb or through breast milk. Intravenous drug users who share needles are also at high risk.

But HIV is most often transmitted through sex between men. Quickly, a lot of myths began to spread, such as one could get it from touching someone on their arm, hugging, or from breathing the same air.

"Even though the overwhelming evidence indicated that that was not the case, there were still people who were propagating falsehood(s)," said Dr. Fauci.

Perhaps no one expressed the anguish of AIDS better than New York author and playwright Larry Kramer.

"You would see guys on Fire Island carrying their boyfriends in their arms saying, 'Can you tell me, have any idea what's wrong with him?' I went to so many doctors and nobody knows what's wrong with him, and many heartbreaking kinds of moments like that," said Kramer.

As documented in his Tony- and Emmy-winning work, "The Normal Heart," Kramer -- HIV-positive himself -- became enraged at behavior in the gay community.

"Because we were dying, you know, all this business about, 'I don't wanna use a condom.' Well, sorry fellas. That's what you gotta do now," he said.

But he was even more angry at the federal government and the pharmaceutical industry. He founded a protest group called ACT-UP to demand quicker action on developing AIDS prevention and treatment drugs.

One person who felt Kramer's fury was Dr. Anthony Fauci, of the National Institutes of Health, who acknowledges ACT-UP's contribution.

Braver asked, "Did the scientific community, in fact, start speeding up the trials and [become] less rigid in what they did before they would bring a drug to market?"

"We loosened some of the restrictions, but we never compromised our core, fundamental scientific principles," Dr. Fauci said. "And that was, I think, a great victory -- a victory for the activists and a victory for the scientists, 'cause they saw they could do things better without being so restrictive."

In 1987 AZT, the first medication that could slow the progress of HIV and reduce the risk of developing into AIDS, was approved. And over the years a stream of drugs has improved treatment and lengthened lives.

Larry Kramer never expected to live to 82, but he remains bitter: "I'm not grateful for having lost hundreds of friends, and I never forget them. I'm not grateful that gay people are still leading -- many of us -- lives that got us into the same kind of mess that we got into in '81. They're relaxing their sense of responsibility and having unsafe sex.

"And because of this PrEP stuff, which is certainly helpful, people are using it as an excuse to go back and have the crazy sex lives we had in the disco days, and we mustn't do that."

AIDS prevention and treatment drugs can be expensive, and though there are programs that provide them, not everyone has access to them. The rate of new AIDS cases tends to be higher in the African American and Latino communities.

Braver asked, "Were you willing to take chances 'cause you were young, and you thought nothing could happen to you?"

"I was definitely at the stage of, like, 'I've never had an STD before,' so I didn't even fathom it," Rios replied. "The first one that I got was obviously HIV."

But, he insists, the news was NOT distressing to him. "I was very much, Okay, I accept it. So what's next? Where do we go from here?"

He now takes one pill a day, as part of a clinical trial. But Rios will probably be on medication for the rest of his life.

And after 36 years, Anthony Fauci is still searching for both a vaccine and a cure: "We still have a long way to go," Dr. Fauci said. "What we really need to do is to essentially put the nail in the coffin of this disease. And we are not there yet. And when we get casual about it, and assume that, 'Well, we took care of HIV/AIDS, we can move on to something else,' that's a big mistake."