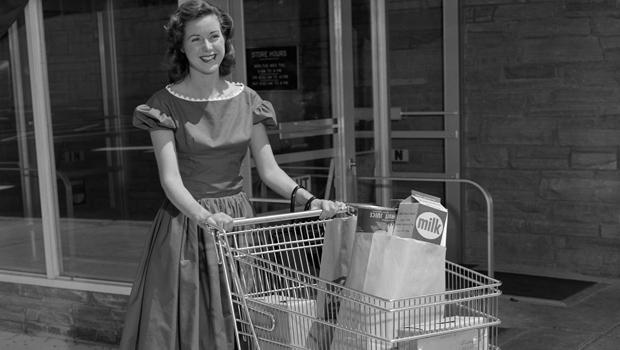 And now a page from our "Sunday Morning" Almanac: June 4th, 1937, 80  years ago today … the day the late Sylvan Goldman made history, rolling out the world's first shopping cart at his Humpty Dumpty supermarket chain in Oklahoma City.

Goldman came up with design by placing a basket on the seat of a folding chair, and wheels on the legs. He called his carts, "folding basket carriers."

The rest, as they say is history: Thanks to Sylvan Goldman, the shopping cart became a familiar part of American life, and virtually the first means of transportation for generations of American children.

Long a familiar part of American life, the shopping cart was the subject of good-natured fun in the 1983 film "Mr. Mom," starring Michael Keaton.

The cart has also proved an irresistible temptation for daredevils, such as the cast of MTV's "Jackass" show.

Needless to say: Do NOT try this at home -- or anywhere else for that matter, least of all at a supermarket.

Meet the man who ran away and built a circus

Restoring the Aurora, a cruise ship with a storied past
Thanks for reading CBS NEWS.
Create your free account or log in
for more features.
View CBS News In
CBS News App Open
Chrome Safari Continue
Be the first to know
Get browser notifications for breaking news, live events, and exclusive reporting.