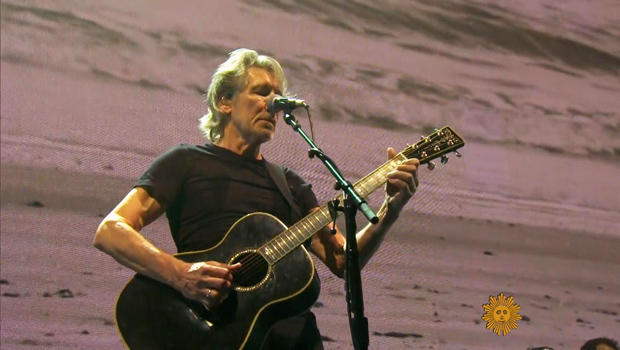 "The Wall" is one of many hits from Roger Waters, co-founder of the legendary band Pink Floyd.
Not content with A SUMMER SONG, he's launched an entire tour, and tells our Anthony Mason all about it:

For much of May, Roger Waters' stage crew was setting up his new show, working out the staging in a vacant arena in the New Jersey Meadowlands -- booking a 20,000-seat arena just to rehearse.

Water's last tour, an epic production of "The Wall," the rock opera he wrote for his former band, Pink Floyd, ended in 2013 after taking in nearly half a billion dollars, the highest-grossing tour by a solo artist in history. His new show: another spectacle.

"It's technologically extremely demanding," Waters said. And compared to "The Wall"? "I think this is even more complex, and bigger."

The "Us + Them" tour kicked off last week  in Kansas City. And it may be the 73-year-old musicians' last lap.

"I can't imagine I do another one after this, but I'm going for it," Waters said. "I mean, I'm going all over the world with this thing."

"You think this is the last one?" Mason asked.

It's simply a matter of time, says Waters.

It's been 50 years since Pink Floyd released their debut album. Waters formed the band in college with his Cambridge friend, Syd Barrett, and fellow architecture students Nick Mason and Rick Wright. But Barrett, the band's creative force, soon had a mental breakdown: "It happened so fast," Waters said. "We'd just turned pro. We'd just had a song in the Top 10 in the U.K. And suddenly, the guy who wrote all the songs disappeared."

"Were you guys a bit lost for a while?"

"Yeah, we were. And of course what you do is, everybody who can starts trying to write, because if you don't write, you're dead."

Waters emerged as the band's main songwriter, the force behind two of rock's most influential albums:

1973's "Dark Side of the Moon," which spent a record 14 years on the charts; and 1979's "The Wall," the fifth-bestselling album of all time. Its theme is alienation and the walls that divide us.

But a wall was rising within Pink Floyd, as Waters and guitarist David Gilmour battled for control.

In 1985, in one of the ugliest breakups in rock history, Waters walked away: "There's a large kind of body of people, you know -- fans, I guess, of the band -- who sort of blame me for having destroyed something that is precious to them. And I guess I can understand that to some extent. But I regret it."

While the other members continued on as Pink Floyd, Waters went out on his own: "I was doing gigs in 4,000-seat arenas to 1,500 people, when they were playing to 70,000 people in the local football stadium. All the same songs. They're still playing all my songs. And that was very character-forming! Very character forming."

The bass player suddenly had to come out of the shadows.

Water said, "I was so scared."

"What were you terrified of?"

"Failure. Being found out."

"What were you afraid of being found out about?" Mason asked.

"If people found out you're a wanker!" he laughed.

"I think everybody has that fear on some level."

"I'm sure that's right. Mine is very much connected to that whole father-son thing."

Waters was just five months old when his father, Eric Waters, was killed during World War II. After a recent concert, a veteran came up to Waters: "And he said to me, 'Your father would be proud of you.' And I lost it completely. And I realized that it was a uniquely kind of important moment to recognize that I could still be that needy of my father's approval, if you like. But also emotionally entangled in that loss."

At end of his last tour, for the documentary about "The Wall," he went to the beach at Anzio in Italy, where his father died in battle. He'd never been before. "I'd never followed to his death, if you like," Waters said. "I'd never stood on that beach staring out to sea, thinking about that."

And in the other war that altered Waters' life, with his former bandmates (especially David Gilmour), he's declared a fragile truce.

Mason asked, "There's kind of a peace with you guys these days?"

"But you stopped slamming each other."

"Yeah, which is a very good thing."

"Why did that happen?"

"Well, it's kind of a waste of time. You know, a real waste of time and energy to butt heads about things that are essentially superficial."

This past Friday, Waters released his first solo album in 25 years, "Is This the Life We Really Want?" … a question he asks again in his new tour.

You can stream the new Roger Waters album "Is This the Life We Really Want" by clicking on the embed below (Free Spotify registration required to hear the tracks in full):

"The whole show is really a kind of musical protest against the acceptance of the state of perpetual warfare," he said.

"When you take an overtly political show like this into the polarized environment of this country, what sort of reaction are you expecting?" Mason asked.

At a time when the American president wants to build a wall, Roger Waters is still trying to tear them down.

Mason asked. "Is there still a role for the protest song?"

"Absolutely, of course. If one isn't protesting this -- what's going on now -- I think I'd rather be dead!"

To hear "Smell the Roses," from Roger Waters' new album, "Is This the Life We Really Want?" click on the video player below.