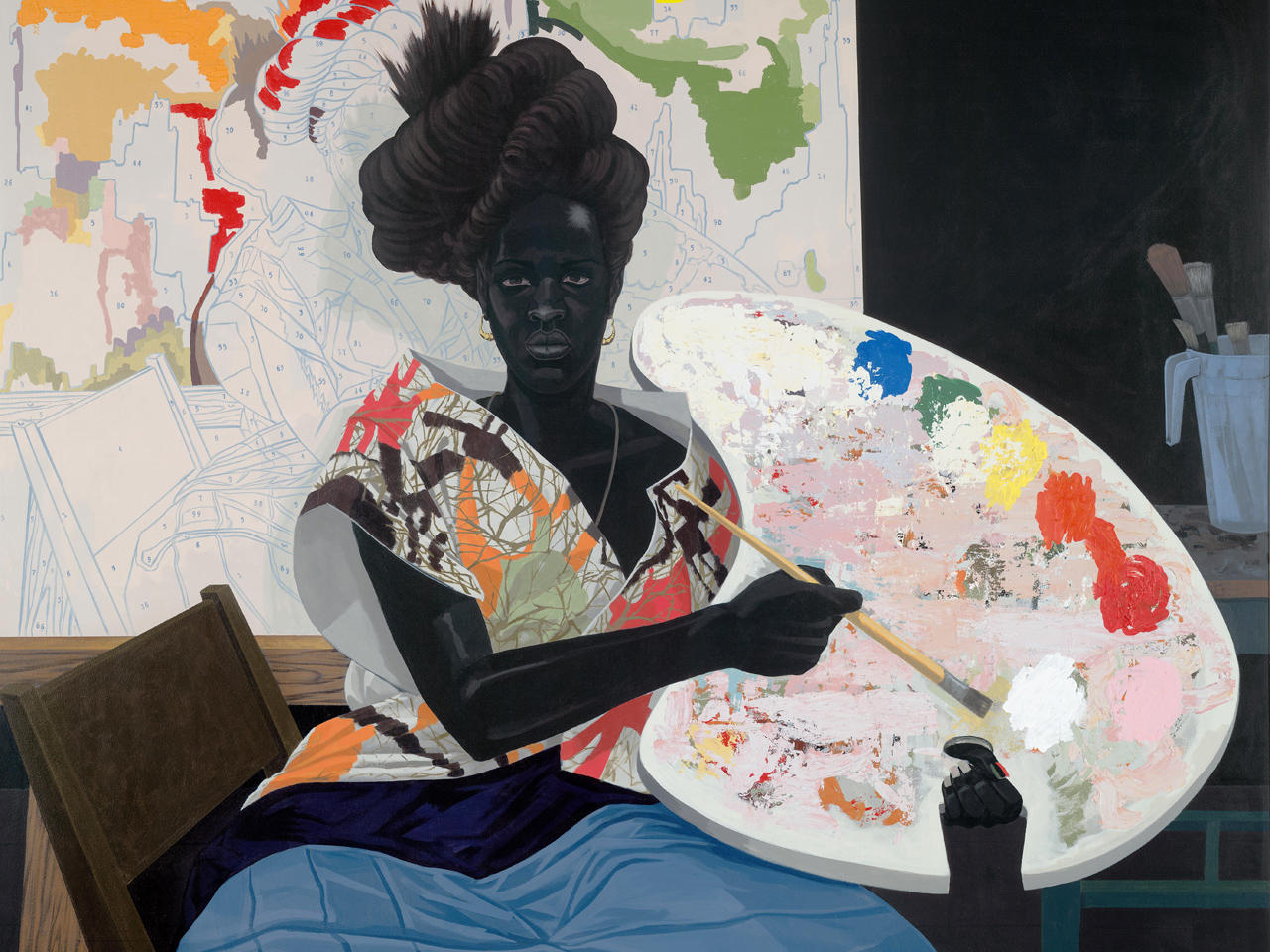 Currently "On Display" in an exhibit that's traveling the nation: the works of an artist who wants us to view the world with new eyes. Alex Wagner is our guide:

Kerry James Marshall is changing the face of American art.

"My introduction to art history was like everybody else's," said Marshall. "You see an art history book that has works by Rembrandt and Leonardo da Vinci and Michelangelo. Yes, these things are great. But I don't see a reflection of myself in any of these things I'm looking at."

So for decades now, Marshall has been working on that reflection.

His figures aren't just black; they are jet black -- bold, proud, undeniably black. And he wants to fill museums with them.

"That body of work has to reach a critical mass so that it's no longer an exception to see things like that in a museum," he said. "You can't have one picture of a black person or two pictures of a black person. You've got to have a lot of them."

His trademark style has catapulted him into the stratosphere of the art world: 72 of his paintings were displayed earlier this year a New York's Metropolitan Museum.

That exhibit, a retrospective, originated in Chicago, and is now at the Museum of Contemporary Art in Los Angeles.

When asked where she thinks Marshall fits into the canon, curator Helen Molesworth replied, "Firmly inside of it. The pictures are very much of our moment. They're of our time. And I do think that museums historically are incredibly white places.

"And so to walk into an art exhibition in which the figures are all black, it's really revelatory."

Born 62 years ago in Birmingham, Ala., Kerry James Marshall was eight years old when the KKK bombed a Baptist church, killing four girls. He would go on to live in Los Angeles during the Watts riots, and later Harlem, and now Chicago's South Side.

"All those things had an impact on shaping the person that I am," he told Wagner. "It's sort of inescapable. But those are a small fraction of the kind of experience you have on a day-to-day basis."

His works deal with grief, injustice and loss, but also everyday life: swimming pools and beauty salons, daily rituals and quiet moments -- a window into a world often ignored in fine art.

Referencing Marshall's pictures of black domestic life, from a couple getting ready for bed, to a picnic scene, Wagner asked, "When you paint those images, are you thinking of specific memories or people?"

"Well, I think I'm thinking in more generalized terms," he replied. "But a lot of the things I'm thinking about are a reflection of experiences I had myself."

Experiences like a visit to a barber shop, depicted in his work "De Style" (left).

"I think our stereotypical image of black men has been predominantly one of criminality," said Molesworth. "And I think what we're being shown here is actually tenderness, stylishness, togetherness -- a brotherhood."

Marshall's work is filled with references to both art and American history. For example, his painting "Past Times" calls to mind Manet's "Luncheon on the Grass."

"That couldn't be more correct," said Molesworth. "And if you do know contemporary art, then you're going to be realizing, 'Wow, he's doing something really interesting. He's putting these moments of abstract painting in a realist picture.'"

His vision has paid off. Marshall's work has received rave reviews. He even made Time Magazine's list of the most influential people of 2017.

And his latest work seems to be exploring for new ways to depict the world as he sees it.

Wagner said, "We were in his studio and he's painting white figures. How meaningful is that? And what are we to read in that?"

"Well, one of the reasons I know -- in my heart, belly and mind -- that Kerry James Marshall is a great artist is because he continues to surprise me," said Molesworth. "It's the first painting that has white people in it. And I don't know what it means yet. The picture isn't finished. But to me that indicates a challenge that he's set himself."

This is an artist intent on breaking the mold -- even his own.

When asked how he keeps evolving, Marshall replied, "Well, it has everything to do with whether you're working, because the process itself is a means of exploring. I'm interested in that.