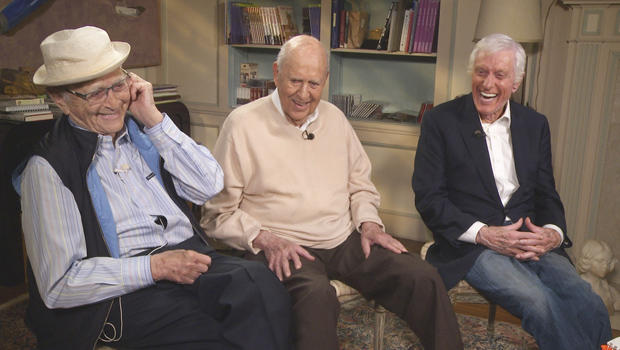 Dick Van Dyke and Carl Reiner were a team made in heaven on "The Dick Van Dyke Show."  These days, together with their pal Norman Lear, they constitute a team of GOLDEN BOYS -- older, yes, but no less amusing. Tracy Smith reports:

Three legends -- all together in one room, at Carl Reiner's Beverly Hills home. A little intimidating. Still collaborating, and still close.

"These two creative giants have been the biggest influence on my life," said Dick Van Dyke. "I mean, Carl found me for the series, which changed my life. And Norman has put me in movies and specials. And these two guys, without them I don't know where I'd be today."

"And if we didn't find him," Reiner interjected, "we wouldn't be talking to you!"

"I know I can get applause just standing up," said Lear. "I can walk across the room, and get a standing ovation!"

They're older, sure. They just don't "think" old.

Van Dyke added, "People are more afraid of aging than they are death these days. And we need to tell them there's a lotta good livin' to do!"

And their new film does just that -- call it a celebration of life after 90.

It's the documentary film, "If You're Not in the Obit, Eat Breakfast," debuting tomorrow on HBO.

That title is based on a joke Reiner told "Sunday Morning" in 2015: "First thing I do in the morning, before I have coffee, I read the obits. If I'm not in it, I'll have breakfast."

Smith asked, "If you could boil it down to one thing, to what do you owe your long life?"

"I think attitude has an awful lot to do with it," Van Dyke said. "A lack of stress. And we all have stress in our businesses. But I think, well, most of us are kind of easy-going. We're not uptight people. I think [stress] eats you up, really, your body, and your mind."

"I always say I married the right woman," said Reiner.

"How does that explain me? 'Cause I didn't marry her," Lear said.

"But you married another person …"

They all say laughter is important, and also a little workout.

Carl Reiner likes to walk around the neighborhood, and every morning before his feet touch the floor, he does stretches like a circus performer. "I wasn't gonna do 'em today, because I was late. But I said, 'Wait a minute. It only takes ten minutes.' I did my stretching exercise."

And as you can see in this recent music video for the band Dustbowl Revival, Dick Van Dyke hasn't lost a step.

He also says his wife, Arlene, whom he married in 2012, helps keep his heart in shape.

When asked to define having a good life, Van Dyke said, "I think the bottom line is, you have to have someone to love. I think you really must."

"If you love a person, and love the thing you're doing, that makes a world for you," Reiner said.

"I think it helps, too, to love yourself," added Lear. "That's the hardest one."

"Having a good marriage, and good children," said Reiner. "A good life is what you send out to the world. I have three children, non-toxic children, all have done great things, and are continuing to do great things. And I had a marriage of 65 years. That's the only thing that really defines me."

Estelle Reiner passed away in 2008, at 94. These days, lifelong friend Mel Brooks (who turns 91 this month) keeps Carl company.

"You know, if you have one good friend, you're lucky at this age," Reiner said. "Mel comes over every night. And I don't know what I would do if he didn't come over. These guys live too far away. I don't drive anymore. I eat, though!"

When asked what was the best advice he could give, Dick Van Dyke said, "Do something that you love to do. You know, don't be living a life of, what is it, quiet desperation -- people working at jobs that they hate to go to. And that to me ruins a person. Find something you like to do, and please, God, do it!"

And that's something they all seem to live by. More than five decades after "Mary Poppins," Dick Van Dyke will be in the 2018 sequel, "Mary Poppins Returns."

Back in 1975, Norman Lear developed the sitcom "One Day at a Time" for CBS. Now the show's been reimagined for Netflix, with stars like Rita Moreno, and he's an executive producer.

Making people laugh, it would seem, never gets old.

"You stand behind an audience," Lear said. "I've done this thousands of times literally. Standing behind an audience when they belly laugh. And they have a tendency to come out of their seats a little, and come forward, and then go back. And I've never seen anything more spiritual than that --  everybody [laughing] together."

"What does that do for you when you know that you're the source of that?" asked Smith.

"I think it added time to my life."

And Carl Reiner is probably writing as we speak.  His latest title says it all: "Too Busy to Die."

Smith asked, "You think about the end?"

"No, I think about how I'd like to go. I'd like to go in my sleep. What a show this would be if I was talkin' to you … " said Reiner, feigning dropping dead.

Kidding aside, if there is any real secret to a long and happy life, it may be to just keep looking ahead.

"I think there are two little words we don't think enough about: over, and next," said Lear. "When something is over, it's over. We're onto next. I mean, this is the moment."

"If You're Not in the Obit, Eat Breakfast" debuts on HBO on June 5. To watch a trailer click on the video player below.