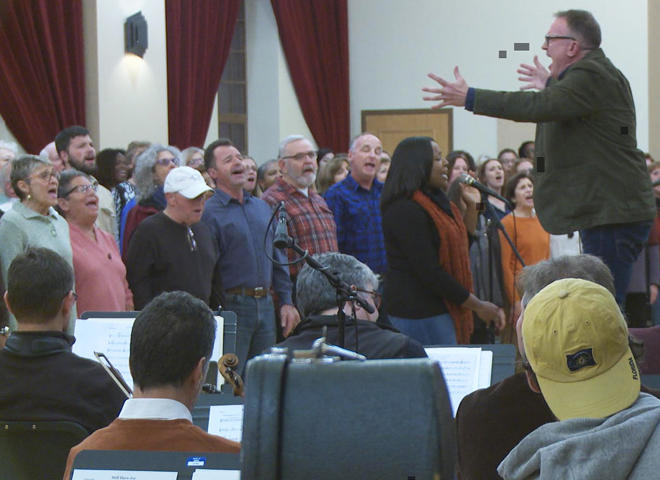 COVER STORY: What’s to be done about fake news? | Watch Video
Are hacking, fake news and trolling presenting new and extraordinary threats to our safety and electoral process? Or are they just a 21st-century version of the same kinds of free speech that’s protected as the foundation of our democracy? Ted Koppel reports.

FROM THE ARCHIVES: The taskmaster behind “The Nutcracker” (VIDEO)
For 50 years Irine Fokine (whose mother, prima ballerina Alexandra Federova, danced in the first performance of “The Nutcracker” in St. Petersburg in 1892) has overseen performances of the Tchaikovsky ballet.  In this report originally broadcast on “Sunday Morning” December 23, 2007, correspondent Bill Geist attended rehearsals at Madame Fokine’s Ridgewood, N.J., dance studio, where she guides her young students through leaps and plies.

FROM THE ARCHIVES: A “Harlem Nutcracker” (VIDEO)
In a story originally broadcast on “Sunday Morning” on December 8 1996, host Charles Osgood reports on “The Harlem Nutcracker,” a reinvention of the classic Tchaikovsky ballet, reimagined by way of Duke Ellington and Billy Strayhorn, as a jazz-infused fantasy involving a grandmother revisiting the dreams of her youth. Features interviews with choreographer Donald Byrd and conductor David Berger.

‘TIS THE SEASON: That’s a wrap! (VIDEO)
One of the country’s most famous holiday gift-wrappers is Alton DuLaney, of Splendora, Texas. In 2008, he won the $10,000 grand prize in the Scotch brand Most Gifted Wrapper competition. Today, select clients pay him to wrap their gifts. Nancy Giles discovered why DuLaney considers his wrapping an art form.

​Masters & Johnson: They wrote the book on having sex

MUSIC:  Robbie Robertson’s “Testimony” | Watch Video
Anthony Mason interviews the principal songwriter for the seminal rock group The Band, and together they revisit a time when Robertson was part of a revolution in music.

HARTMAN: The Secret Santa police (Video)
This week, the Kansas City, Kansas, police department was on the take. Each officer in this room got at least a grand, courtesy of the anonymous, wealthy businessman known only as Secret Santa. Steve Hartman has more.

MOVIES: Nicole Kidman on a mother’s love | Watch Video
The Oscar-winning actress knows just how to break our hearts, but no story she’s ever told on screen makes her as emotional as her own. Tracy Smith has a profile.

PASSAGE: In memoriam (Video)
“Sunday Morning” remembers several notable figures who passed away this week, including the creator of the Heimlich Maneuver, Dr. Henry J. Heimlich; E.R. Braithwaite, a teacher, diplomat and novelist famous for his roman a clef, “To Sir, With Love”; and actor Alan Thicke, best known for playing the TV dad of “Growing Pains.”

BOOKS: The alchemy of Paulo Coelho | Watch Video
Brazilian author Paulo Coelho’s book, “The Alchemist,” has spent an astonishing eight years on The New York Times Best Seller List, and has sold more than 65 million copies. His latest novel, “The Spy,” was inspired by the life of Margaretha Zelle, a Dutch courtesan and dancer popularly known as Mata Hari, who was executed as a spy in 1917.

Correspondent Rita Braver meets Coelho at his home in Geneva, Switzerland, to discuss his unlikely journey to becoming one of the most translated authors in the world.

BOOK EXCERPT: From “The Spy” by Paulo Coelho

WEB EXTRA VIDEO: Paulo Coelho on books and the Internet
The Brazilian-born author of such bestsellers as “The Alchemist” has more Facebook followers than any other writer (more than 28 million), so he has a special affinity for the Internet. But what about books? In this web exclusive, Paulo Coelho explains to correspondent Rita Braver why he rid his home of thousands of books.

WEB EXTRA VIDEO: Paulo Coelho’s homage to Ernest Hemingway
In this web exclusive, the bestselling author of “The Alchemist” talks to correspondent Rita Braver about how he was inspired by Ernest Hemingway’s “The Old Man and the Sea,” and what he hopes readers take away from his own books.

NATURE: Penguins (Extended Video)
We leave you this last Sunday Morning before Winter among the penguins of Antarctica. Videographer: Ed Forgotson Jr.

CALENDAR: Week of December 19 | Watch Video
From the Electoral College presidential election to the Winter Solstice, “Sunday Morning” takes a look at some notable events of the week ahead. Jane Pauley reports.