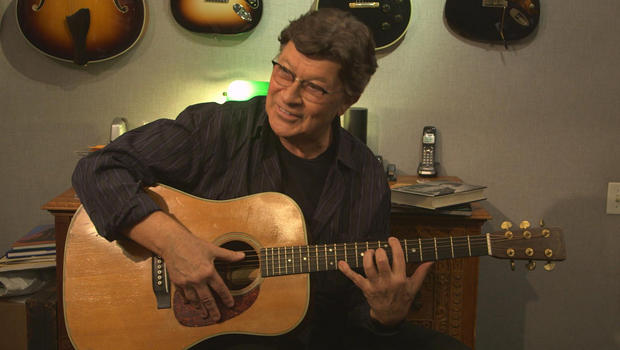 “The Weight,” one of the most memorable songs from the group known simply as The Band, is considered one of the greatest in our rock ‘n’ roll songbook. It’s the work of songwriter Robbie Robertson. And while The Band long ago disbanded, Robertson is still very much with us, and he’s recounted his music-filled career in a new memoir, “Testimony.” Anthony Mason has more:

In his Los Angeles studio, Robbie Robertson is struggling to recall the chords to one of his best-known songs, “The Night They Drove Old Dixie Down.” It’s been a long time. “Yeah, I barely remember it. I haven’t played it since ‘The Last Waltz,’” he said.

That was 40 years ago -- 1976 -- when Robertson played his last gig with The Band, at “The Last Waltz,” rock’s most famous farewell concert.

“You were done?” Mason asked.

And for the most part, Robertson hasn’t looked back. But in his new memoir, “Testimony” (Crown Archetype), The Band’s principal songwriter returns to the time he was part of a revolution in music.

Raised in Toronto, Robertson -- who is half-Mohawk Indian and half-Jewish -- was 10 when he started playing guitar. By the time he was 16, he was playing on the road full-time, earning a living playing the “Chitlin Circuit” down South.

“You and Levon clicked right away?” Mason asked.

“Yeah. Every bone in his body was musical. And he just lit up the room. So him and I just became like brothers.”

One by one, Garth Hudson, Richard Manuel and Rick Danko also joined the group, and in 1964 they split off from Hawkins to form their own band, Levon and the Hawks.

They made their way to New York, where Robertson encountered a young folk singer, Bob Dylan: “And we went by the studio when he was recording ‘Like A Rolling Stone,’ just happened to drop in, right? And he played the song. And I thought, ‘Wow, I don’t think I’ve heard anything quite like this before,’” Robertson said.

Dylan needed a backing band for a new tour and enlisted the Hawks.

“It was so ugly and so bad every night,” Robertson said.

And some blamed his new band.

Mason asked, “What were you thinking when you heard that?”

“But Bob stayed with you?”

“Bob didn’t budge. And I thought, he’s either right or he’s crazy, you know?”

“But that must have meant a lot.”

“It meant a lot, and by then we were back-to-back in this thing.”

Dylan would say, “It was like putting our heads in the lion’s mouth.”

“There was something deep in his soul that was saying, ‘I’m right and you’re wrong.’”

In 1967, when Dylan retreated to Woodstock, The Band joined him, renting a small house in nearby West Saugerties and turning its basement into a studio. They’d call the place The Big Pink.

“And it was like Valhalla,” Robertson said. “We’re in our own world. We’re making music that nobody is supposed to ever hear.”

Dylan and the band would record more than 100 songs in the basement.

“Yeah. Out of the Basement Tapes comes ‘Music From The Big Pink.’ Then Bob within weeks goes and records ‘John Wesley Harding,’ you now? There couldn’t have been more music in the air.”

Robertson would write perhaps his best-known song then, after noticing the stamp on his Martin guitar. “When I was looking inside the guitar and I saw ‘Nazareth,’ and I thought, ‘Wow, that’s a beautiful sound, you know?’ I thought, ‘Ah, I’m on to something here.”

“I pulled into Nazareth.
I was feelin’ about half past dead...”

Robertson’s song “The Weight” would appear on “Music From Big Pink,” their groundbreaking debut album, released in 1968.

They also debuted their new name: “We got used to everybody calling us ‘The Band,’” Robertson said. “And all the time we were playing with Bob and everything we were The Band, right?” Robertson said.

For eight years, The Band would be one of rock’s most influential groups.

Robertson came to Los Angeles in the fall of 1973. But by the mid-seventies, when Robertson had resettled, drug problems were causing friction in The Band:

“And then I said, ‘Why don’t we bring this episode to a conclusion, a beautiful musical conclusion?’”

On Thanksgiving Day in 1976, at San Francisco’s Winterland, they played their final concert. Dylan, Eric Clapton and Joni Mitchell all showed up for “The Last Waltz,” which was filmed by director Martin Scorsese.

Robertson has since collaborated with Scorsese on the music for six films.

But the dissolution of the original band would leave a bitter taste, particularly with drummer Levon Helm, who saw “The Last Waltz” as Robertson’s attempt to celebrate himself.

In a 2007 interview, five years before his death, Helm told Mason that he didn’t want The Band to break up. “Of course, not. That don’t make sense, have a big ‘goin’ outta business’ concert.”

Mason asked, “Is that rift ever gonna heal?”

“I doubt it. Not as long as he wants to claim everything that The Band ever made, you know?”

When asked if he and Helm had ever tried to patch things up down the road, Robertson said, “As much as I loved him and admired his extraordinary musical talent, I could not do the bitterness anymore.

“I sat there and thought about a lot of the beautiful things that we have been through together. And I was happy for that moment to kind of wash away any dark clouds.”