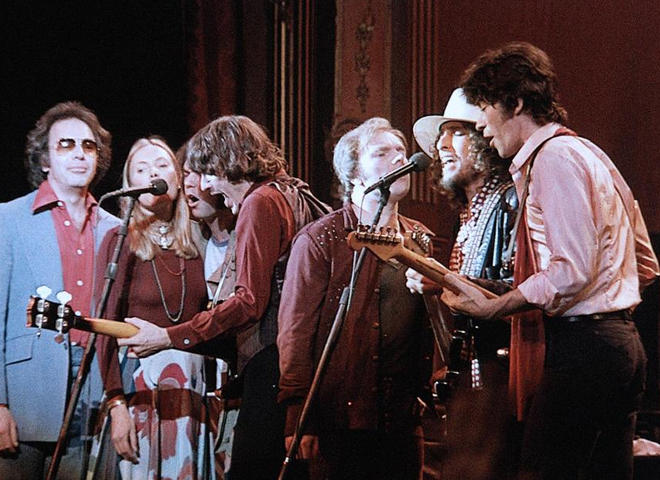 In his new memoir, “Testimony” (Crown Archetype), Robbie Robertson, songwriter for the rock group The Band, explores an era of revolutionary music, as well as the group’s farewell performance at the Winterland Ballroom in San Francisco on Thanksgiving Day 1976. Joined by guest artists, including Bob Dylan, Emmylou Harris, Ringo Starr, Ronnie Hawkins, Dr. John, Joni Mitchell, Muddy Waters, The Staple Singers and Eric Clapton, the concert was filmed by Martin Scorsese and became the epic documentary “The Last Waltz” (1978).

In this except Robertson recalls the preparations that were made for the show:

For our full-on Canadian sequence with Neil Young and Joni Mitchell, we started by trying “Acadian Driftwood” with them joining in on the choruses. Then, when Neil sang “Helpless,” Joni did a high background vocal that sent shivers through the hall. In the show Joni wasn’t going to perform until after Neil, and I didn’t want to give away her appearance before that. I asked Marty if we could film Joni from behind the curtain while she sang her part on “Helpless.” “Definitely,” he said. “We’ll have a handheld camera back there.”

With Bob, we ripped through three or four songs without hesitation, not a medley, though everything was interconnected. He wanted to do a combination of material from our early days together and Planet Waves. I pushed for us to do “Forever Young” and he was completely up for it. We even joked about doing the Basement Tapes song “Tiny Montgomery,” which went, “You can tell everybody down in ol’ Frisco, tell ‘em Tiny Montgomery says hello.”

We still felt a deep kinship with our old ringmaster, Ronnie Hawkins. We hadn’t seen Ron in a while, but he showed up looking spry in his new official uniform: black suit, white straw cowboy hat, red neck scarf, and a black T-shirt with a picture of a hawk on it. Ron hadn’t lost a beat with his famous southern expressions. As a young female crew member passed by, he called out, “Hey, you sweet thing, I ain’t as good as I once was, but I’m as good once as I ever was.”

By the time we got to run over a tune with him, though, he was getting cold feet. With all these big-name performers, he worried he wasn’t going to fit in, and he didn’t want to embarrass himself. We immediately waved off his uncertainty and told him he was the first one we’d invited to this event; as far as we were concerned, he deserved to be here as much as anybody. He hemmed and hawed, but we wouldn’t hear it. The Hawk was our beginning, and if we were going to throw a last waltz, he was going to have a dance.

I hadn’t found time to think about what to wear for the concert, so the day before the show I asked if any of the guys wanted to go clothes shopping. Richard and Rick joined me and we hit a couple of vintage shops. Richard found a loud checkered suit for the occasion, something you might see W.C. Fields wear to a wedding. Rick picked out a vest that fit him to a T. A sharp-looking scarf caught my eye, as well as a George Raft-ish dark suit jacket with a thin pinstripe. Levon said he was just going to wear something that “breathes.” It would be getting hot under all those lights, and it was going to be a long night. Garth said he was going to wear a suit because, if you remember, he didn’t sweat -- ever.

When we got to the hall, the whole set from La Traviata was now assembled and looked incredible. It stood big, bold, and beautiful, with a dark red tone to it. Lit from the front and the back, the set could look regal, gothic, theatrical, or invisible, depending on the light from the cyc screen.

Our sound guys had been working furiously in the recording truck parked outside the hall, trying to figure out how to mic this whole extravaganza. Sure, they could get it on tape, but when you turned everything on, would it sound like a big cluttered mess? Recording engineer Elliot Mazer was leading the charge, and Ed Anderson, our sound mixer on the road and head engineer at Shangri-La, was invaluable because he knew our music so well. Other engineers, like Neil Brody and Tim Kramer, also helped organize the live recording. All this had to sync up with the film, so there were many elements to account for and it took a small army. They didn’t have the opportunity to get cues and levels on everybody’s performance because we were rehearsing in different locations. There was so much left to chance, but you’ve got to play the hand that’s dealt you.

We ran over Bobby “Blue” Bland’s song “Further On Up the Road” with Eric Clapton. He also wanted to do one of the songs he had recorded at Shangri-La with Rick and Richard. Every chance I got I would break away for a few minutes to finish writing “The Last Waltz Theme” and “Evangeline.” The problem was that with all the work prepping the event and rehearsing with the guests, I didn’t have time to properly teach the songs to the other guys.

Still, we were making progress on other fronts. Our horn section was sounding better with each rehearsal. Some of these guys we had played with before, like Tom Malone and Howard Johnson; they were so good, we brought them in from New York. We were also familiar with Jerry Hey and Jim Gordon, Rich Cooper, and Charlie Keagle, because they had played with so many artists we knew. As a sound experiment, we even added Larry Packer on electric violin. John Simon was helping tremendously in bringing together the horn section’s arrangements. We were using some of Allen Toussaint’s charts, along with Tom Malone’s, Howard Johnson’s, and Henry Glover’s. Our players would have to double on many woods, reeds, and brass.

As I kept handing over song lyrics to Marty, I observed his method of turning each song’s words into a shooting script. Besides pointing out specifics in the arrangement of each song and noting particular lyrics, he wrote out camera moves and lighting changes. He had a multitude of little boxes in the margins beside each verse and chorus, filled with drawings of directorial instructions. It looked masterful and precise. He went over this two-hundred-page script meticulously with Michael Chapman, and for the actual show he would call out these instructions over headsets to all the cameramen and lighting people. This wasn’t the usual way, where the camera operators wing it and see if it cuts together later. This was serious direction, focused on capturing these performances with control, even if everything was “take one.”

The big question, still way up in the air, was, “Will these thirty-five-millimeter cameras endure constant shooting for many hours?” No one knew. We called Panavision and the various camera companies, but no one could guarantee anything because this had never been done before. Marty knew that we couldn’t shoot every song because they had to reload film and change batteries. Those breaks might save the cameras from burning out, but it also meant we had to make some choices. We went over the song list for the whole show and decided what we would shoot and when they could reload. Some of the decisions to not film certain songs were painful, but we had to be tough-minded and realistic.

While going over these song lists, it also weighed heavy on me whether or not the guys and I would be able to remember the arrangements for all our guests’ songs. With our limited rehearsal time, this was an overwhelming challenge. “That’s like twenty new songs to remember, with nothing written out,” I said to Marty. “Holy s**t! All you can do now is pray.”

“Oh yeah, there’ll be a lot of praying.” He smiled.

Excerpted from “Testimony.” Copyright © 2016 by Jaime Robbie Robertson. Published by Crown Archetype, an imprint of the Crown Publishing Group, a division of Penguin Random House LLC.