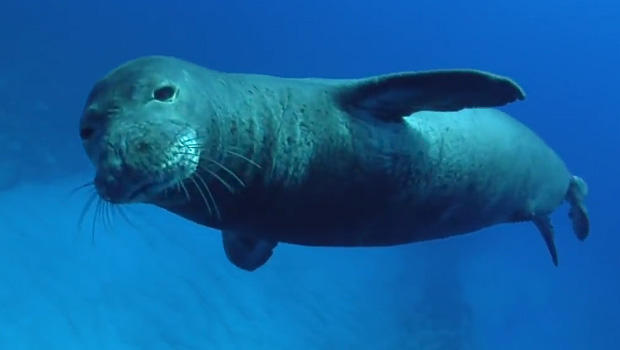 There is nothing better than seeing an animal in its own element in person. Zoos are okay, especially for those who can’t travel, but nothing beats the real thing. I don’t care if it is a small anole lizard in my yard or a huge African lion 10 feet from my car, eyeing me like he is considering whether I taste good; I am totally absorbed and “in the moment.”

I have been lucky and have had the opportunity to travel to many amazing places. One of my favorites was the Galapagos Islands. I had looked forward to going there for years, dreaming about the tortoises, the finches, and many of the other birds, but I never really gave much thought to the surrounding ocean and the amazing diversity of species there.

Luckily, we chose a tour which included snorkeling twice a day. It was wonderful -- tons of fish, an amazing array of invertebrates, marine iguanas, you name it. My most memorable moment was diving in the water, looking down and seeing a seal streak by. The seal slowed down and came back to me. It came close and we looked eye-to-eye. Then it flipped upside-down, but still kept eye contact with me. I’m not sure if it wanted to play, or if it was trying to figure out what I was. It is a moment I will never forget. The seal hung there in the water, almost curled into a “C” shape, staring at me as I stared back. It was magical!

The Galapagos seal I saw was an eared seal. Seals are divided into two groups: earless seals (including the monk seal) and the eared seals.

The terms earless and eared are a little misleading; both groups have ears. The earless seals just don’t have the outer flap we often, incorrectly, refer to as the ear.

"The Sound of Music" costumes up for auction

Earless seals are better adapted to an aquatic environment. Along with no outer ear flap, they have streamlined bodies, internal testicles, and a smooth layer of blubber under their skin. They can also reroute blood flow to the blubber to better control their body temperature. Their aquatic adaptations have limited their ability to move on land. Eared seals can “walk” on land; earless seals can’t, because they can’t get their hind flippers under their body, and their front flippers can’t support them on land.

I have never been to Hawaii, but when I get there one of the first things I’m going to do is go visit the monk seals, although I will have to keep my distance. Hawaiian monk seals are on the endangered species list, with only a little over 1,000 individuals surviving today. It is one of the most endangered seal species, primarily due to overhunting in the 19th century, as well as some problems they face nowadays, including:

One of the major monk seal problems is that young females don’t get enough nutrition and die before they are a year old. In an attempt to mitigate this, some young, malnourished females have been captured and rehabilitated at the Hawaiian branch of the Marine Mammal Center. Once they are healthy enough to survive on their own, they are released back to the same area where they were captured. Because they are fitted with a satellite tag, researchers can track the young females to assure they are surviving on their own, which they appear to be doing.

Along with giving young female monk seals a boost, the National Marine Fisheries Service is working to engage volunteers to protect monk seals on beaches, and much of their habitat has been protected by the formation of the Papahānaumokuākea Marine National Monument in 2006 by President George W Bush. It protects the uninhabited northwestern islands of Hawaii.

In August of this year President Obama expanded the marine monument to include a 583,000-square-mile “no take” zone, protecting one of the most biologically-diverse areas of the world. The largest population of monk seals lives within this monument.