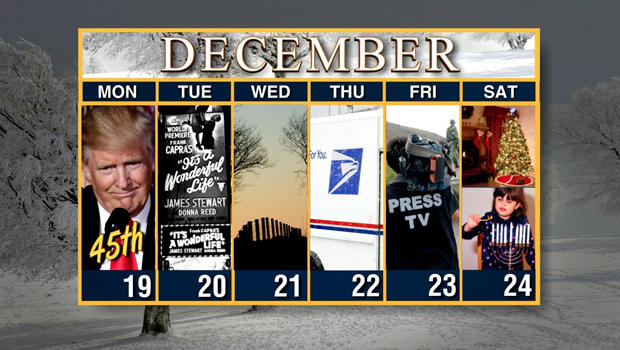 Here’s a look at the week ahead on our “Sunday Morning” Calendar:

On Monday, the Electoral College will all but certainly ratify the election of Donald J. Trump as the nation’s 45th President.

Tuesday is the 70th anniversary of a charity screening of the Christmas classic, “It’s a Wonderful Life,” one day before the movie had its official premiere.

Wednesday sees, in the dimmest of light, the Winter Solstice -- the first day of winter, and the shortest day of the year.

Thursday is expected to be the busiest delivery day of the year for the U.S. Postal Service.

Friday marks the tenth anniversary of a United Nations resolution condemning attacks on journalists. At least 606 reporters have been killed worldwide since that vote, according to the Committee to Protect Journalists.

And Saturday is both Christmas Eve and the first night of Hannukah, the Jewish Festival of Lights.