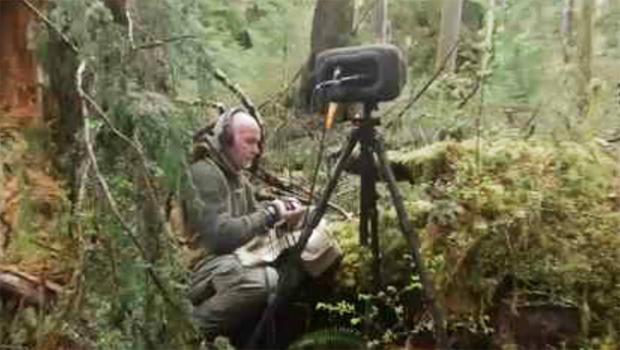 COVER STORY: For art’s sake: When funding the NEA is in jeopardy | Watch Video
President Trump has announced plans to end government support of the National Endowment for the Arts and other organizations, such as the National Endowment for the Humanities and the Corporation for Public Broadcasting, that have supported America’s cultural life for decades. Erin Moriarty reports on how arts programs that have nurtured new artists and preserved small town life may suffer from ending the NEA.

WEB EXTRA: Lin-Manuel Miranda on the importance of federal funding for the arts | Watch Video
The award-winning creator of “Hamilton” says government support for arts education is crucial to our children’s future.

ALMANAC: Shakespeare’s birth, and death | Watch Video
April 23, 1564 was the day traditionally given for the birthdate of the great English playwright, while April 23, 1616 found the Bard of Avon “passing through nature to eternity.” Jane Pauley reports.

COVER STORY: Recording the sounds of nature’s quietest places (Video)
Gordon Hempton, who calls himself the Sound Tracker, is an “acoustic ecologist” who has traveled the world recording the sounds of nature, from birdsong and rainfall to babbling brooks and the rustling of leaves. But the noise we humans make is making it harder to find those quiet places -- and, he says, it’s having real consequences for wildlife as well. “Nature’s music is an endangered species,” he tells Lee Cowan.

Bernie Krause, a musician and sound recordist, has become an audio anthropologist, documenting the sounds of nature. He also has noticed dramatic changes in some areas, such as in a Costa Rican rain forest. He helps Cowan -- and us -- listen to the difference.

FROM THE ARCHIVE: The Sound Tracker (Video)
Sound recordist Gordon Hempton is an “acoustic ecologist” who has traveled the world recording the sounds of nature, from birdsong to babbling brooks. “Sunday Morning” visited with Hempton for this report, first broadcast on November 18, 1990, in which he describes the process of capturing the natural world, and searches for the optimal position at which to best hear the sound of the ocean’s waves.

Q&A: Sheryl Sandberg on living “Option B” | Watch Video
On May 1, 2015, while vacationing in Mexico, the husband of Sheryl Sandberg, the chief operating officer of Facebook, died suddenly while exercising. Dave Goldberg was just 47. An autopsy, Sandberg says, showed that he died of coronary heart disease and had a cardiac arrhythmia.

Then known for her bestselling 2013 book “Lean In,” which urged women in the workplace to stand up for themselves, Sandberg unexpectedly found herself confronting her toughest challenge, as a single mother of two young children.

In an emotional and wide-ranging interview, Sandberg talks with “CBS This Morning” co-anchor Norah O’Donnell about breaking the news of their father’s death to her children and how they worked together to move forward after the loss.

She also talks about coping with grief and other life lessons she explores in her new book, “Option B: Facing Adversity, Building Resilience and Finding Joy,” co-written with friend and psychologist Adam Grant.

PREVIEW: Sheryl Sandberg on recovering from her husband’s death

FROM THE ARCHIVE: Sheryl Sandberg and Dave Goldberg in 2013 (“60 Minutes”)

BUSINESS: Be kind, rewind: Blockbuster video stores kept open in Alaska | Watch Video
The first Blockbuster video rental store opened in 1985, and at its peak the company had 9,000 stores worldwide. But that was before Netflix. Blockbuster went bankrupt in 2010, but not every store closed their doors. In fact, there are 12 Blockbusters still open in the U.S., including several in the far reaches of Alaska. Conor Knighton checked them out.

HARTMAN: One young boy’s hoop dreams (Video)
Thirteen-year-old Jamarion Styles, of Boca Raton, Florida, lost his hands, and most of his arms, as an infant due to a rare bacterial infection. But that didn’t stop him from dreaming of playing on his middle school basketball team. Steve Hartman reports on an unlikely sports hero.

BOOKS: “The Outsiders,” a teen classic, turns 50 | Watch Video
Published in 1967, “The Outsiders” by S.E. Hinton, centered on the emotional challenges of competing factions of teenagers, is considered a classic, and a pioneer in the young adult fiction category. The book has sold more than 10 million copies, been translated into dozens of languages, and is part of the core curriculum in schools across the country.

Serena Altschul talks with Hinton, who started writing when she was 15, about how her novel became a touchstone for young readers; and to actor Rob Lowe, who turned 18 on the set of the 1983 film. Lowe says he was ready to give up on the prospect of an acting career until being hired by director Francis Ford Coppola, becoming part of a legendary cast that also included Matt Dillon, Emilio Estevez, Tom Cruise and Patrick Swayze.

To watch the trailer for the film “The Outsiders” click on the video player below.

NON-FICTION: The real story of documentary queen Sheila Nevins | Watch Video
In the land of non-fiction film, one woman rules: Sheila Nevins, who for more than three decades has been in charge of documentaries for HBO.  She has overseen films that have shined a bright light on everything from Syria to Scientology, the environment to Alzheimer’s.

At the age of 78, she’s still in the screening room most days, and has just completed a memoir, “You Don’t Look Your Age ... and Other Fairy Tales” (Flatiron). Lesley Stahl reports.

BOOK EXCERPT: Read (and listen to) an excerpt from “You Don’t Look Your Age”

COMMENTARY: Scott Simon on baseball and the power of art | Watch Video
The host of NPR’s “Weekend Edition” -- and a lifelong Cubs fan -- talks about his team (long a collection of hapless losers), and how an iconic Norman Rockwell painting depicting the dugout at Wrigley Field has a special connection for him.

WEB EXCLUSIVE: Read an excerpt from Scott Simon’s “My Cubs” on Chicago’s history of curses

NATURE: Redwoods (Extended Video)
We leave you this Sunday Morning after Earth Day in a grove of towering Redwoods in California. Videographer: Jamie McDonald.

CALENDAR: Week of April 24 | Watch Video
From a birthday celebration for Barbra Streisand to the NFL Draft, “Sunday Morning” takes a look at some notable events of the week ahead. Jane Pauley reports.

NATURE UP CLOSE: Rocky Mountain Spring
A look at the wildflowers now blooming across the more than 16 million acres of public land in Colorado.