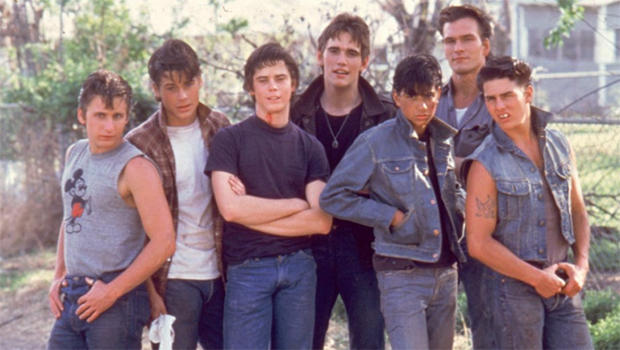 We’ll be getting a look INSIDE “THE OUTSIDERS” this morning. Serena Altschul has a close-up on the classic novel and teen movie:

For fans of the 1983 coming-of-age film, “The Outsiders,” maybe the only thing better than watching the movie … is watching it with Rob Lowe.

“Look how handsome Matt is! Looks like a movie star,” said Lowe.

“Frankly, you are all ridiculously handsome,” said Altschul.

“He hasn’t taken his fake tooth out yet; he does that after the rumble,” Lowe said.

Directed by Francis Ford Coppola, “The Outsiders” didn’t just help launch careers. For then-18-year-old Lowe, it saved his. “’The Outsiders’ was my last audition that I was going to go before I sort of gave it up,” he said. “If I hadn’t been cast in ‘The Outsiders,’ I wouldn’t be an actor, ‘cause that was the last train leaving the station for me.”

Lowe holds the film close to his heart …. and a big reason is Susan Eloise Hinton, the woman who came up with the story more than half a century ago.

“Suzie was able to capture a moment in everybody’s life that everybody will have, and that is that adolescent striving for the next chapter, which is what ‘The Outsiders’ is about,” he said. “There’s always going to be an audience for that, and there always has been an audience for that.”

She’s known to her legions of readers as S.E. Hinton, the initials a suggestion from her editors.

As she recalled, “They said, ‘We’re wondering if you use your initials, S.E., on this because we’re afraid the first reviewers will pick up the book, see what the content matter is, and review it with a bias.’ Like a girl wouldn’t know anything about this.”

In fact, she knew plenty.

“The Outsiders” was published in 1967. Fifty years later, it’s considered a classic, and a pioneer in the young adult fiction category. It has sold more than 10 million copies, been translated into dozens of languages, and is part of the core curriculum in schools across the country.

And to think Hinton started writing it when she was only 15. “Well, it was about 40 pages long, single-space typed. And then I did most of the work on it my junior year in high school, where I made a D in creative writing.”

Now 68, Hinton took Altschul back to that very school in Tulsa, Oklahoma -- the city she was raised in, and still calls home.

“Everybody had their own little space to hang out in. And the Socials hung out down here at this entrance. That was their spot.”

“The Outsiders” is about adolescent angst and the battles between two groups: The affluent “Socs” (short for Socials) and the lower-class “Greasers” centered around the Curtis brothers: Ponyboy, Darrel and Sodapop (played by Lowe in the film).

“You have to understand, for me, look, I’m 53 years old and I can walk out of this building, down the street and there will be a 12-year-old girl who will go, ‘Sodapop!’” he said.

“They know who you are,” said Altschul.

“What is it about Sodapop, and Ponyboy, that resonates with so many people?”

Hinton said she gets many letters saying “Your book changed my life.”

“That scares me, frankly,” she said. “Because who am I to change anybody’s life? The only way I can deal with the impact ‘The Outsiders’ has had worldwide is to think that it was meant to be written, I was chosen to write it, and it’s out there.”

The movie was shot almost entirely in Tulsa. The building used as the home of the Curtis brothers is being turned into a museum.

Hinton was a special advisor to Francis Ford Coppola during the filming. And to the young actors, she was something more: “She embraced us,” Lowe said. “She made us feel safe, she helped us navigate the very complicated Francis world. And she loved us.”

To which Hinton said, “I loved it. I loved every minute.”

“God, she used to get on me for my southern California speak,” Lowe said. “She once bet me $60 that I couldn’t get through lunch without saying her word gnarly. ’Oh my God it’s so gnarly!’ ‘Francis had us shooting this scene, it was so gnarly!’

What is so enduring about ‘The Outsiders?’ Why does it connect with young people? For Hinton, it’s simple: “When you reread the book, at least I do, you just think it’s so over the top emotionally. I would never have the nerve to write that un-self-consciously again. But at that time, that was exactly the way I felt. And I think that’s one reason why kids identify so strongly. They’re gonna like that.”

Hinton has fans the world over … and one of her biggest has this message for her: “I would say thanks for being a mom when we all needed one,” Lowe said.

To watch a trailer for “The Outsiders” click on the video player below.