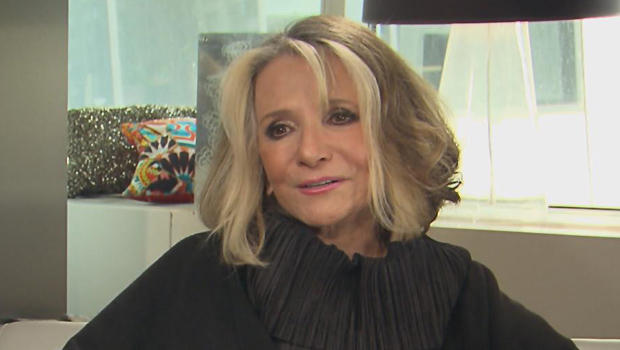 We have a round of QUESTIONS-AND-ANSWERS this morning with Sheila Nevins, courtesy of Lesley Stahl of “60 Minutes”:

In the land of documentaries, one woman rules: Sheila Nevins, who for more than three decades has been in charge of documentaries for HBO. She has overseen hundreds of films that have shined a bright light on everything from war zones (“Cries from Syria”) to Scientology (“Going Clear”), from the environment (“Gasland”) to Alzheimer’s (“The Alzheimer’s Project”).

She’s been recognized for her work with enough awards to fill a room.

And at the age of 78, she’s still in the screening room most days, fully engaged.

Stahl sat in on a session for a new documentary Nevins commissioned by Alexandra Pelosi. It’s a reading of the Constitution, the Declaration of Independence and the Bill of Rights. “I’m not sure I know what I’m watching, but I’m not bored,” she remarked.

Nevins told Stahl her basic criterion is to not be boring. “Oh, without question,” she said.

And she offered her opinion during the screening. “This is fine, I’m not bored yet … a little bored.”

“How do you feel about having a narrator?” Pelosi asked.

“I think that would be the worst idea I ever heard of in my life,” Nevins replied.

The filmmaker said, “She’s the patron saint of documentaries. All filmmakers come to Sheila first. That’s the holy grail.”

Stahl asked if Nevins were really as tough as is suggested when she looks at a documentary. “She’s honest,” Pelosi replied.

But there is no sugar-coating to soften the blow.

And Nevins doesn’t sugar-coat subjects like her facelift or her anxieties in a new collection of essays she calls, “You Don’t Look Your Age … and Other Fairy Tales” (Flatiron Books).

Nevins described the books as “either an expose, a memoir, an obituary, a dalliance.”

Nevins studied drama in college, then landed jobs at the U.S. Information Agency, then ABC and CBS, working her way up the ladder with a strategy she openly admits involved fooling around in the office. (“I was pretty-girl provacateur -- buying attention with a too-short skirt,” she writes.)

“Well, I mean, I don’t know that I slept my way to the top, but I didn’t not sleep with my bosses in the early days, when they wanted me,” she laughed.

“And how was that different from sleeping your way to the top, if you slept with your bosses?”

“There weren’t that many.”

“But there’s more than one?”

But “wicked” gave way to “woke,” as Nevins watched the rise of feminism -- and one woman in particular.

Stahl said, “Here you were, promiscuous, flirtatious, seductive, and then there’s Gloria Steinem? She hits you right in the face?”

“Yes, like with ice,” Nevins replied. “It just splashes you in the face and you say, ‘Why have I done this? Why am I wearing tight jeans to work? Why am I starving myself on some diet? Why am I sleeping with the boss? And why am I thinking that’s the way to go up?’ And it was the way. It worked. I would love to say it didn’t work. It would be so appropriate, so now. But it worked.”

But she changed, accepting the feminist message, and that started a climb up the ladder on her own merits -- all the way to creating the acclaimed documentary unit at HBO.

But she never forgot that sex works, and so she developed popular series like “Real Sex” and “G-String Divas.”

And she had no problem with it. “None. Although I was criticized by my colleagues, especially those when I left CBS, like, ‘How could you? How could you?’”

“Yeah, yeah? How could you?” said Stahl.

“Why not? Well, who was getting hurt? The real pornography of life is living without healthcare; it’s not sliding up and down a pole for a buck!”

The large audiences attracted by skin on the screen gave Nevins enough skin in the game to explore more serious subjects, such as the 2015 mini-series, “The Jinx: The Life and Deaths of Robert Durst.”

One measure of how her stature and influence have grown: She got A-listers to record her “You Don’t Look Your Age” audiobook, like Meryl Streep, who read about the scars left by Nevins’ mother:

“My mother was hard on me.  I never seemed to do anything right.”

Nevins said, “I was not special to her, not really, no. I was a daughter.”

“Yes, I’m positive. She’s dead. You can’t ask her. But I once asked her why she wanted to have children so badly, and she said, who would pick her up at the airport?”

Her mother suffered from Raynaud’s phenomenon, which affects circulation to the hands and feet.  Usually it causes minor discomfort; for Nevins’ mother it was major.

“In very severe cases,” said Nevins, “which is what she had, your extremities become gangrenous, they atrophy, they break off -- they die.”

By the time she died, she’d had one leg, one arm and three fingers amputated. “So, she was really mutilated, quite mutilated.”

And as Nevins writes, “I grew up fearful of decay.”

Which sets the stage for the chapter she asked Stahl to record.

“I want to celebrate the longevity of my life. My mom never made it. My dad gave it to cigarettes. Why am I hiding? I am a product of magazine covers that screech: “Young at any price. Buy me!” The saleslady who says the ill-fitting clothes look great on me and make me look young -- Sold! To me, the fool who buys the spiel. Please, God, I’m an atheist who wants to look young. I have enough Botox in me to detonate Iran. Why can’t I go gracefully into gravity? This aging terror.”

“This is where you confess your terror about aging,” said Stahl. “You said, ‘This aging terror. I have enough Botox in me to detonate Iran.’  But you look so good.”

“I don’t think it’s fair to have worked so hard and given up so much time to not have more time. I’m angry that it’s almost over.”

“Wow. That hit me with a wallop,” said Stahl.

“You feel that way?” Nevins asked.

“I’m better than you are at at putting blinders on, not thinking.”

But she IS continuing, adding to an astonishing body of work. One thing you can say about Sheila Nevins: she hasn’t been boring.

“You must feel great?” Stahl asked.

“No,” Nevins said. “I think I didn’t waste much time, because I always knew time was very precious.”