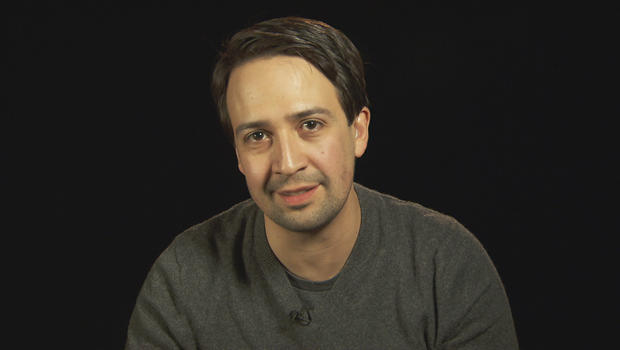 The career of Lin-Manuel Miranda, the Pulitzer- and Tony Award-winning creator of the Broadway sensation “Hamilton,” has benefited from grants from the National Endowment for the Arts, one of the government agencies threatened with elimination by the Trump administration.

Erin Moriarty: Did you ever when you were growing up, honestly, ever even imagine your life like this?

Lin-Manuel Miranda: Not in a million years! Although I have to say, I think that some part of me did imagine that I wanted a life in the arts. I knew I wanted a life pursuing creative endeavors. And I know that having the gift of a public school education that had money for the arts is a big reason why those dreams were possible.

Moriarty: Why do you say that?

Miranda: I was very lucky. I went to a public elementary school and high school where art and music were side-by-side with math and science. And those were the things that made me want to be good at school! (laughs) I found who I was in the theatre community in elementary school, in junior high, and in high school.

And I think it saved my life. And I think it pointed me in a direction. I think my grades were good, because I wanted to be allowed to be in the school play every year. And I think the values you learn when you’re involved in creative endeavors in school, they apply to the rest of your life.

Moriarty: But I think somebody might wonder why I’m talking about public funding of the arts to someone who is a creator of a hit Broadway show. You don’t need it.

Miranda: Well, yeah, I think you’re talking to me, because at every formative stage, I can point to public funding of the arts as making that possible.

My first job was as an intern for WNET, that’s the PBS affiliate in New York City. I organized the “Reading Rainbow” library. I worked in educational affairs. When I was 14 years old. Shuttling between there and McDonalds, being paid minimum wage on 91st and Columbus.

My first musical was workshopped at the O’Neill Musical Theatre Center, which is partly funded by the NEA. It was the first place where I ever got any distinction, [where] I had anyone telling me, “You’re a good lyricist.”

But that’s not even the real story. The real story is the NEA funds things in all 50 states. They are the supplement when arts programs get cut. They fund reading programs between parents and young children in Kentucky. They fund, you know, educational initiatives all over the state, all over the United States. So you know, when we talk about the NEA, we’re talking about a very small amount of money that does get an enormous return on its investment in terms of what it gets out of our citizens.

Miranda: Yeah, that’s been true since cavemen were painting stuff on the sides of walls. We’re always going to have arts. That’s the genius of our species, isn’t it? But this is not about that. This is not about an artist getting funding for their project.

This is about funding programs that help parents read to their children. This is about funding arts and giving it a seat at the table with the rest of the other things you learn as you’re growing up. And study after study has shown that when arts are a part of your education, your overall education is richer. Test scores go up. Reading literacy goes up. Everything goes up. It does wonders. So it’s about investing in our future and in our youth. It’s not about funding art. Art will live and it’ll die. And things will succeed and things will fail. But funding our future is important.

Moriarty: But what do you say --  I don’t know if you saw that the budget director in this current administration said, “We can’t go to families of coal miners who are struggling even to have jobs and ask them to pay for the Corporation for Public Broadcasting. We can’t defend that.” What do you say to that?

Miranda: My fear is that arts programs and arts education programs all over the country will suffer, and our children will suffer as a result. And that’s across the board -- that’s test scores, that’s our culture. You know, we’re richer when we have students engaged in these activities, when arts and music have a seat at the table. They foster activities that help us become better citizens. And I would hate to see that go away.