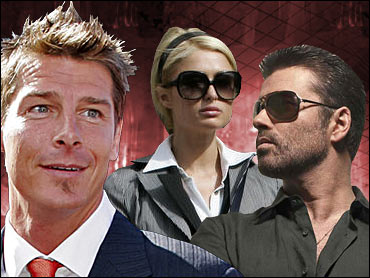 If the events of this week were an episode of "COPS," it would air during sweeps. From George Michael to Paris Hilton, a crop of famous people were speed dialing their lawyers and showing up in court.

Fresh from her sentencing last Friday, Paris Hilton has all of America counting the days until the heiress is incarcerated.

One of Hilton's pals was so distraught over the news of her jail sentence that he created a petition seeking a pardon for the socialite and addressed it to Gov. Arnold Schwarzenegger. No word yet on a pardon but by week's end it looked as if Hilton's 45-day jail term could be cut in half.

"Extreme Makeover: Home Edition" enthusiast Ty Pennington was deflated when he was arrested for driving while under the influence of alcohol over the weekend. The TV handyman later apologized in a statement released via his publicist:

"I also want to apologize to my fans, ABC Television and my design team for my lapse in judgment and the embarrassment I have caused," he said.

Kate Moss's main squeeze, Pete Doherty, was reportedly arrested for suspicion of drug possession over the weekend. This isn't the first time Doherty has had a run-in with law. Last June, in two separate incidents, he was fined for cocaine use and for assaulting a BBC journalist.

Singer George Michael when he reportedly pleaded guilty to being unfit to drive due to drugs. He was detained late last year when he was found slumped over the wheel of his car in the middle of an intersection.

"I am perfectly aware that I did something very wrong and got into my car when I was unfit to drive," Michael told the court, the Associated Press reported. "I was not in my normal physical state and I'm perfectly prepared to accept the correct punishment for that and I would have accepted it a long time ago."

Police arrested Tom Sizemore after they reportedly discovered meth and smoking pipes in his car. But this prosection is multi-layered: the "Saving Private Ryan" actor is already on probation for a prior drug conviction.

Busta Rhymes nixed a deal that would have sent him to jail for a year, it was reported on Wednesday. The rapper, who was arrested last week for driving under the influence, is reportedly facing a laundry list of other charges in unrelated events, including allegations that he assaulted a fan.

Country singer Martina McBride reportedly was in court this week, trying to keep an alleged stalker at bay. Ricky D. Fissel was accused of dropping by the crooner's home unannounced twice last month.

The Associated Press reported that a search of Fissel's home yielded a newspaper article in which McBride's photo was circled and hearts were drawn around it.

Testimony in the Phil Spector trial shifted this week to the events that led up to the murder of actress Lana Clarkson, CBS News correspondent Hattie Kauffman reported. A friend of Spector's testified that the night Clarkson died, the music legend acted unusual at dinner, downing several drinks even though he was on medication.

In earlier testimony, four women described how Spector pulled a gun on them when he was drunk. The defense contends that the music producer rarely drank.