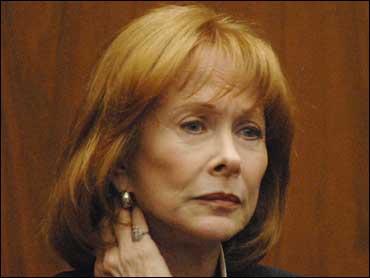 A friend of Phil Spector testified Thursday that the music producer "was not his usual self" during a dinner date hours before actress Lana Clarkson's death at his mansion.

Rommie Davis said at Spector's murder trial that she was concerned about him because he was drinking and taking medication, calling it a "lethal combination."

After the dinner, authorities say Spector met Clarkson, a hostess, at a nightclub and asked her to accompany him to his home. She was found dead early Feb. 3, 2003, a gunshot through her mouth. The defense says she shot herself.

During testimony Thursday, Davis said she and Spector, who were high school classmates, dined out all three nights of the weekend leading up to Clarkson's death and Spector's behavior concerned her.

He was ordering drinks at each restaurant they visited on Friday, Saturday and Sunday, and it was the first time he had consumed alcohol during the their five-month relationship, she said.

"I was very concerned about him," she said.

On Feb. 2, 2003, she said she told Spector he should not be drinking but he ordered two daiquiris before dinner.

"He was not his usual self," she said. "He was not interested in what I had to say. ... In all the time I went out with him, he was great fun to be with. ... This weekend, the behavior was totally different."

She said she never saw Spector with a gun but she recalled that he once told her "politely" that he carried a gun in the trunk of his car. She said he never mentioned it again.

On cross-examination, Davis said she did not remember whether Spector finished both drinks he ordered and couldn't tell whether he was drunk. She said she never saw him in possession of a gun and that he had never threatened her.

She said Spector delivered her back to her home at 11:15 p.m. The testimony set the stage for a detailed account of events in the hours before Spector arrived at the House of Blues, where he met Clarkson.

Before Davis took the stand, the defense sought to undermine the credibility of one of the four women who have testified to being threatened with guns by Spector in the years before Clarkson's death.

Melissa Grosvenor told a story similar to the others — initially finding Spector to be charming and suddenly being terrorized with a gun when she sought to leave his presence.

Defense attorney Roger Rosen sought to attack her story and suggested one of her sisters had heard a different account from her. Grosvenor said the sister is a drug addict and she believes the sister is receiving money from Spector.

Rosen also sought to emphasize that she didn't know if a gun she claims Spector pointed between her eyes was loaded. She acknowledged she did not know.

But when he sought to point out that the gun wasn't fired, she replied, "I wouldn't be sitting here if it was."

Prosecutors followed up on previous testimony by Stephanie Jennings, a music industry photographer who described a gun-weilding Spector hold her hostage at a New York hotel and him later threatening her when she stood him up for a date.

Prosecutors played for jurors expletive-filled messages left on Jennings' answering machine in which Spector berated her with obscenities and threatened to make sure she wouldn't work again.

Spector, 67, rose to fame in the 1960s and '70s, changing rock music with what became known as the "Wall of Sound" recording technique. Clarkson was best known for a 1980s role in Roger Corman's "Barbarian Queen."