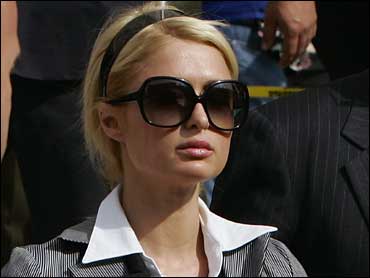 Just as lawyers have taken the first step to appeal her 45-day jail sentence, a petition directed to Gov. Arnold Schwarzenegger has been posted on Paris Hilton's official MySpace page.

Hilton has also rehired her longtime publicist, Elliot Mintz, who she fired over the weekend, Mintz confirmed in an email sent to The ShowBuzz Tuesday.

The online petition, written by a friend named Joshua, asks that the California governor pardon the socialite. It had more than 900 signatures by Tuesday morning.

"This petition is to ask Governor Arnold Schwarzenegger to pardon Paris Hilton for her mistake. Please allow her to her return to her career and life. Everyone makes mistakes. She didn't hurt or kill anyone, and she has learned her lesson. She is sincere, apologetic, and full of regret for her actions as she explained tearfully to the Judge handling her case in court yesterday. She is distraught and understandably afraid," the petition says.

The 26-year-old heiress was ordered by a judge on Friday to report to a county jail by June 5 for violating the terms of her probation in an alcohol-related reckless driving case.

"We, the American public who support Paris, are shocked, dismayed and appalled by how Paris has been the person to be used as an example that Drunk Driving is wrong," the petition continues. "We do not support drunk driving or DUI charges. Paris should have been sober. But she shouldn't go to jail, either."

The governor's office has not reviewed the petition, but has received individual e-mails from constituents both for and against a gubernatorial pardon, Schwarzenegger spokesman Aaron McLear said.

"We'll treat this as we would any other case of this nature, but it would be premature for the governor to get involved until the individual has exhausted his or her judicial remedies," McLear said.

Hilton has rehired the publicist she dumped over the weekend after being sentenced to 45 days in jail. Mintz would not elaborate on why they reunited. She was ordered to report to county jail by June 5 for violating the terms of her probation in an alcohol-related reckless driving case.

Mintz, whose clients have included John Lennon and Bob Dylan, had parted ways over an apparent "misunderstanding she received from me regarding the terms of her probation."

In a court appearance Friday, Hilton told the judge Mintz informed her it was all right to drive on a suspended license for work obligations. Mintz also testified Hilton believed she was allowed to drive. The judge called Mintz's testimony worthless.

Hilton's lawyers filed a notice with the court indicating their intent to appeal on Friday. The document is required before a formal appeal can be lodged.

The hotel heiress, who parlayed her party lifestyle into worldwide fame, said she believes the sentence was unfair.

"I feel that I was treated unfairly and that the sentence is both cruel and unwarranted and I don't deserve this," Hilton told photographers assembled outside her home Saturday.