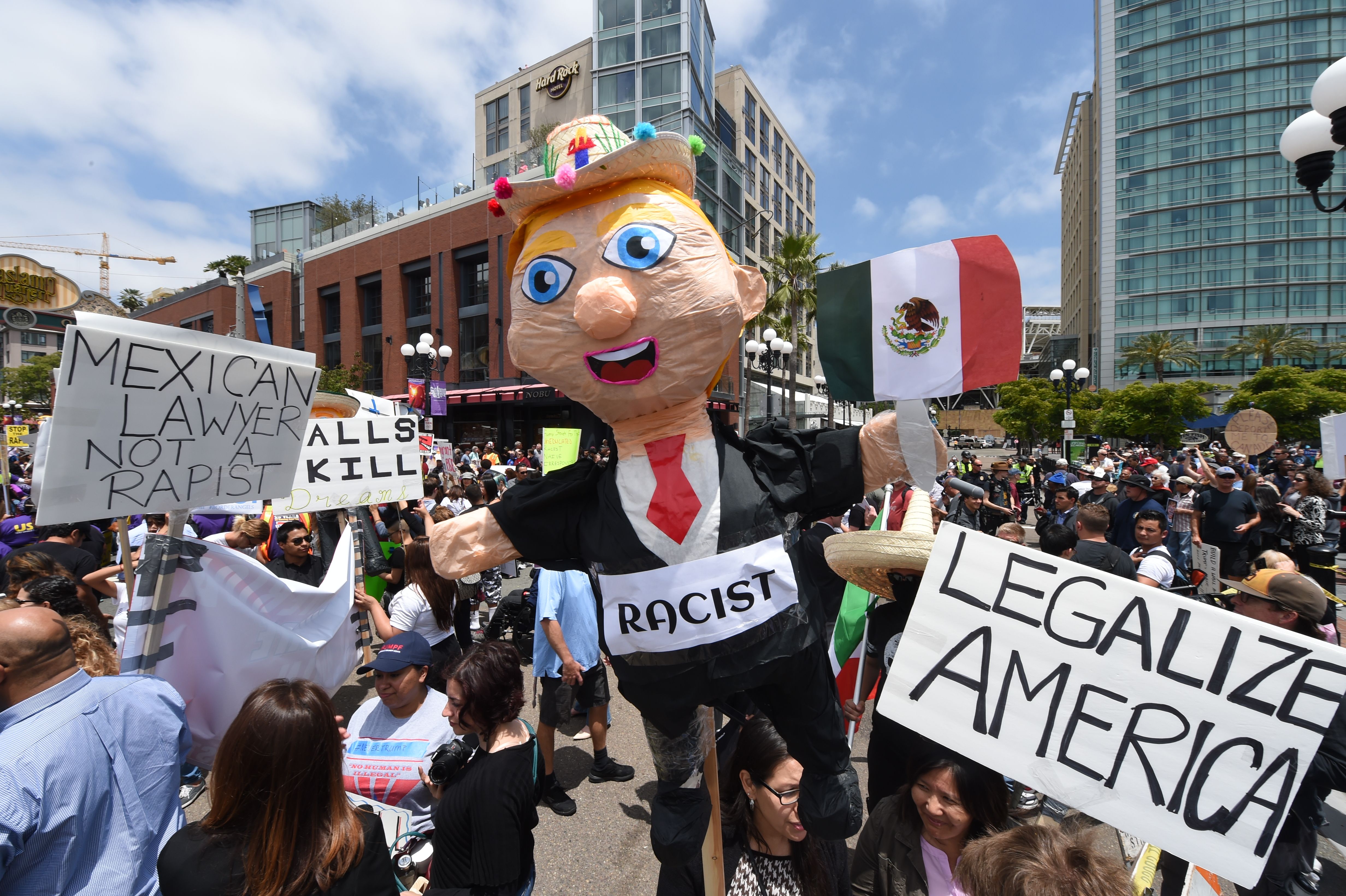 The Republican National Convention is two weeks away and the city of Cleveland is working overtime to prepare for Donald Trump and the stampede of delegates, supporters, media, hangers-on, protestors and counter-protestors who are about to storm the city.

The four day spectacle that Trump is hoping -- but struggling -- to fill with a star-studded cast of speakers is earlier in the year than it's been in previous cycles, this time with the intention of unifying the party more divided than its been in a generation.

Party unity sounds like a pipe dream after Trump's tumultuous month of controversial statements, tweets, stumbles, bad polls and campaign infighting. Not to mention the number of negative stories surrounding the convention itself: the scores of senators and governors who will not be in attendance, the white supremacy groups who will be, the angsty anti-Trump delegates with plans of a coup, and tepid sponsors under pressure to pull the plug on the affair.

But with a new campaign manager, a recent push for a professionalized campaign and the persistence of a teleprompter -- paired with a professional team of convention planning experts -- it's still possible that convention drama might be more of a media narrative than a reality.

Even so, attention on Cleveland will be focused as much on the atmospherics outside Quicken Loans Arena as on the official proceedings inside. Here's what's on the horizon for the 2016 Republican National Convention.

Trump's vision for the convention may be one of glitz and glamor, but the arcane committee meetings taking place in Cleveland the week will take center stage prior to Trump's week in the sun -- and may ultimately decide the fate of his stint in Cleveland.

The decidedly unglamorous meeting of the RNC's Committee on Rules and Order of Business is now expecting an audience of over 400 reporters who have been credentialed to attend the panel. In 2012, less than 20 reporters attended the same proceedings before the Tampa Convention.

The committee of 112 members will make the rules that govern the convention, including party rules on whether delegates from primary and caucus states should be bound to the decisions of their states or be free to vote their conscience and for the candidate of their choice. Two former Romney supporters -- Enid Michelson, a committeewoman from Utah, and Ron Kaufman, a committeeman from Massachusetts -- will referee the three day meeting.

Helping spearhead the anti-Trump #freethedelegate effort is Steve Lonegan, a former Ted Cruz state director from New Jersey. He believes the success of the movement depends on whether Trump has another explosive "Judge Curiel moment" prior to convention.

"Best thing we can do is keep our nose to the grindstone to be in a position to act at the convention accordingly," Lonegan told CBS News.

However, CBS has surveyed at least 50 rules committee members who said they are enthusiastic Trump supporters or respect the will of Republican voters, and will not stand in the way of a Trump nomination.

There are also Republicans who are simply happy that the rules process is not being ignored.

Curly Haugland, an unbound delegate and longtime RNC committeeman from North Dakota, is not a part of the Stop Trump movement, but he is the author of a book called, "Unbound: The Conscience of a Republican Delegate." He argues that every delegate has no obligation to vote a certain way and there can be no penalties imposed by law on a delegate voting their conscience.

"It's an excellent lesson for the media," Hoagland added. "But it's a civics lesson for the entire population of this entire country. The story will be told. It will basically provide sunshine on the rules."

"The amount we've raised to date also surpasses the funds raised for either of the prior two conventions," Lauer wrote in an email to CBS News. "As is customary in convention fundraising, we're in the midst of securing the final 10 percent of the budget in these last few weeks leading up to the Convention. We remain confident that we will have the money needed to pay for all facets of the convention."

It's not uncommon for host committees to fall short on their fundraising needs. Duke Energy picked up the late tab for Democrats in Charlotte in 2012, forgiving them of $10 million dollars worth of unpaid loans.

The Trump factor has inevitably chilled some sponsor support. Other past convention sponsors that are not contributing to the convention this time around include Hewlett-Packard, Microsoft, and Apple. Ford, for example, provided $100,000 in cash in 2012 but is not participating this year.

Wells Fargo provided $500,000 in cash in 2012 and is not contributing this year. But it is hosting the Democratic National Convention in Philadelphia at the Wells Fargo Arena.

The 2012 convention in Tampa also received a $1 million dollar donation from billionaire David Koch and a $5 million dollar contribution from Sheldon Adelson. Koch has stayed out of the presidential race this cycle and Adelson did not respond to request from CBS about whether or not he is helping bankroll the convention this year.

The progressive activist group Colors of Change has been applying pressure on corporations publicly and behind the scenes to drop sponsorship for the convention. The group told CBS News that it is still lobbying Facebook, Twitter, Coca-Cola, and Google and to completely withdraw their support.

None of these costs include the millions that individual donors and corporations will spend on outside parties and events throughout the four day affair, which brings us to...

THE PARTIES (THE BOOZY ONES)

Conventions are about more than nominating a presidential nominee. They're also about the parties. Whether they'll be celebrating, networking, fundraising or drowning their sorrows in Cleveland, Republicans will spend convention week making their way through an endless itinerary of receptions, concerts and late-night carousing.

Every state GOP delegation, from Hawaii to Maine, will be hosting events for its delegates and elected officials attending the convention, either casual happy hours or late-night hotel parties. On the opening day of the convention, the Wisconsin GOP is hosting a "Late Night Beers and Brats" party slated to go until 2 A.M., while the Kentucky Republican Party is planning to kick off the week with a "Red, White and Bourbon Welcome Reception."

Nor will Trump's controversial campaign stop ambitious senators, governors and members of congress from coming to town to tap into the abundance of money and political support packed into one frenzied place. John Kasich, Ohio's governor, hasn't endorsed Trump but is hosting a reception. So is Michigan Gov. Rick Snyder, who is not backing Trump. Those who are supporting the nominee, including Iowa Sen. Joni Ernst, will of course also be in town raising money.

Corporate entities like the Chamber of Commerce, a frequent critic of Trump, and convention sponsor AT&T are hosting events, as are media companies like Bloomberg and Turner/CNN, which is hosting a private golf outing at Canterbury Golf Club.

And then there are the musical acts on the agenda. Those slated to perform include Kid Rock, Better Than Ezra, Robert Randolph, Rascal Flatts, Martina McBride and Lynyrd Skynrd.

Here's where the real story of the convention may lie: Outside of the official security perimeter.

The Secret Service, FBI, Cleveland and Ohio State Police, National Guard, and thousands of police officers from around the country will be working together over the course of the week to ensure peaceful demonstrations -- both for and against Trump.

Cleveland has been tightlipped about its convention preparation. But the city has offered assurances that it is prepared to handle the type of protests and violence that have broken out at Trump rallies across the country.

However, Cleveland.com reported last week that officials approved of a $50 million protest insurance policy, five times more than what they had previously planned for. Officials spent $1.7 million on protest insurance for Tampa's 2012 Republican Convention compared to the $9.5 million it will cost for the $50 million dollar plan this time around.

The city is still sorting through permit applications from a melange of protest groups and counter protestors, as well as some fringe groups, including the Westboro Baptist Church and at least one group claiming that the 9/11 attacks were an inside job.

Members of the white supremacist group involved with the violence in Sacramento two weekends ago, the Traditionalist Worker Party, have also said they will be attending the convention to "protect" Trump supporters from self-described anti-fascist demonstrators.

Police officers will equipped with riot gear and body cameras. Media outlets have been outfitted with tactical gear and have been putting employees through riot training. The ACLU and the Ohio Lawyers Guild have provided "Know Your Rights" trainings to local organizers and activists who might be arrested.

Cleveland itself, fresh off of its first NBA championship in 54 years, is ready to shine, newly outfitted with luxury hotels, designer restaurants and a burgeoning entrepreneurial scene. last week, they were profiled by the New York Times as a city to visit.

But come convention time, locals are just hoping the city doesn't catch fire, like the Cuyahoga River infamously did in 1969.