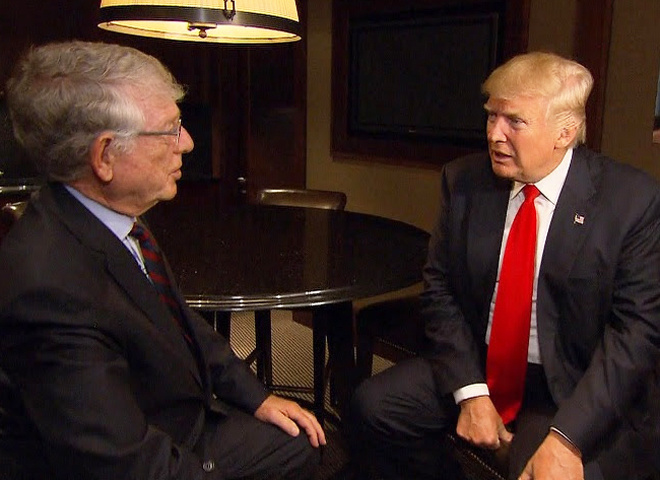 We've heard a lot ABOUT Donald Trump. Time now to hear from the nominee himself:

Nobody in recent memory has a more highly-developed sense of public confidence than the freshly-minted Republican nominee for president.

Still, as I sat down with Donald Trump late last week, I couldn't help but wonder:

"Let me ask you a question I've wanted to ask you for months now: I have a sense that back on June 16th [2015], what Donald Trump was thinking was, 'You know something? I might win a primary or two, and I might win a caucus or two. But you know, the worst thing that's gonna happen is the brand is gonna be improved. I'll be better known. I'll be more famous than I am today. Business is gonna be --.' You never thought you'd be sitting here on this day as the nominee of the Republican Party."

"It's such a great question and such an interesting question, and I think about it myself," Trump said. "I mean, you know, I think I must have, Ted, because I do like to win. And I believe that if I didn't think I was gonna win, I wouldn't have done it. So somewhere deep down in the mind I must've said, 'I'm gonna win.'"

The afternoon of his acceptance speech, Trump did a walk-through and a mic check:

"Well, I was being sarcastic, saying how much we love the media," Trump said

"I know you were," Koppel replied.

"It's been a mixed blessing for you -- you wouldn't be where you are today without the media."

"How did that work?"

"And by the way, some are tremendously honest, but you have tremendous dishonesty in the media, tremendous. I've never seen anything like it, more so in the last number of months, I think, than I've ever seen it. With that being said, you have to power through it, and I do that. And it seems to be working out pretty well. But I do like to expose it."

"When you talk about exposing the media, what the media is there to do, what we are supposed to do, is keep you honest."

"And you've had your share of misstatements over the past few months. Without the media, who would know about that?"

Trump seems to deal with unpleasant reality by ignoring or denying it.

Koppel noted, "The ex-presidents, the leaders of the party, the ones who ran for president, are pretty much arrayed against you."

"I don't think so. Look, Ted, let me explain something: The people like me. I got the most votes, almost 14 million votes, in the history of the Republican Party. We're talking about Dwight D. Eisenhower - "

"We're talking about, no, well, the polls, the polls are showing it."

"But I'm way up with Independents."

"Okay, you can't compare anything you've done before."

"There's nothing like running for President of the United States," said Koppel.

"I think on November 8th, I think that's the way you convince 'em, to be honest with you. It's all about that; that's the only thing."

"If you haven't convinced 'em before November 8th, you're in trouble."

"No, but, no, right now I'm convincing them, Ted. Right now I'm up in many of the polls, and we're doing very well."

"What are you doing? What are you saying? I mean, you talked at one point -- in fact, I heard you say it several times, 'Oh, I can be so presidential.'"

"Well, I mean, I still see that flare of temper. I still see that Donald Trump who likes to jab people in the ribs when he feels he has to. Are we gonna see more of that or less? I mean, you're going after Hillary, there's no question of that, is there?"

"But is it gonna get nasty?"

"We're gonna compete -- with Hillary? Well, I mean, she's taken very nasty ads and all. I mean, it's not like me -- sort of funny that you say I'm going after her. She spent $102 million on negative ads, and you know, everyone says, 'Oh, you're going after Hillary.' She spent $102 million on negative ads. I haven't literally bought an ad. I will. We have a lot of money."

"What is it that's going to be different about the Trump campaign now that you're in a general campaign?"

"How important are the debates gonna be?"

"It could very well be. I think I surprised a lot of people. But I enjoyed the debates. My biggest question when I got into this is, what's gonna happen with the debates, 'cause I'd never debated professionally before. You know, my whole life is a debate in a way. But you know, to go on a stage and -- I went on against people, that's all they do is debate -- you know, they're politicians. And I actually loved debating. I enjoyed it."

"One last question: I have this image of you sitting there in your jammies at night doing your texting and your tweeting and your Facebook. Give me a visual image of when does Donald Trump text and tweet and all the rest of it?"

"Well, I think there'll be very little of that if I win," Trump said. "You know, it's a little bit different. But right now I'm in a very nasty contest with a person who is a very nasty person who, by the way, tweets and texts and, you know, spends -- they have a tremendous apparatus."

"Well, I mean, is it you tweeting? Are all those tweets yours?"

"Well, it allows you to circumvent the media."

"It allows me to get across a point very quickly in seconds. I mean, there was never anything like that. And I have such a big base. It's such a big -- you know, 20 million people, it's such a tremend -- it's more than that. It's gonna be much more. I think I'm gaining probably 100,000 people every few days. And that gives me a big, big base in terms of a campaign. In terms of a presidency, I don't think I'd use it very much at all."