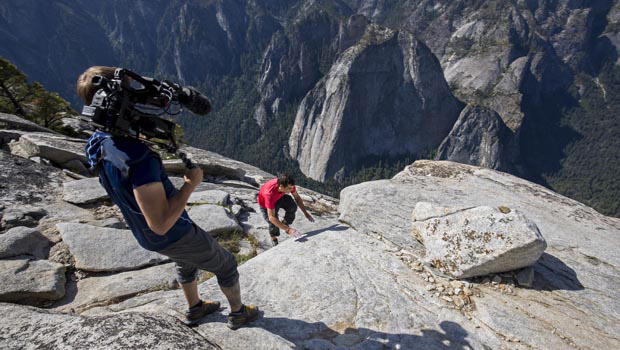 The 1922 movie "Nanook of the North" follows a charismatic real character in a distant land. Though in truth filmmaker Robert Flaherty fudged a few facts, and staged a few scenes, it's generally considered the world's first documentary.

For the next 80 years, documentaries were never as popular as fictional movies. They'd earned the reputation of being cinematic spinach – films that were good for you.

"You were supposed to watch them, they would inform you, but you didn't necessarily want to watch them as entertainment in and of themselves," said producer Dan Cogan.

But Cogan says that lately, that's changed. His company, Impact Partners, has produced or funded over a hundred documentaries, including last year's hit, "Won't You Be My Neighbor," about children's TV icon Fred Rogers, and the movie that won last year's Best Documentary Oscar, "Icarus," about the Russian sports doping scandal.

"We are in a Golden Age of documentary filmmaking," said Cogan. "There has never been as great storytelling in nonfiction film as there is today."

The numbers prove him right. In the last few years, documentaries are earning more, costing more, and being shown more in mainstream theaters.

Cogan credits streaming services: "Netflix played an extraordinary role in making this possible. That algorithm will take you to documentaries even if you don't ask it to look for documentaries."

"So, even if you're not a documentary person, the algorithm may say, 'You've liked these scripted shows. You might like this'?" asked correspondent David Pogue.

"There are people who watched 'Icarus' because they were interested in conspiracy films, or thrillers, that the algorithm took them there.

"But there is also HBO, Showtime, NatGeo, Hulu, Amazon. Apple is now entering the space. CNN has done an extraordinary job. I think there are a lot of places that one can now go to watch these films."

Joe Berlinger has directed 50 documentaries, including "Paradise Lost," "Metallica: Some Kind of Monster," and "Conversations With a Killer: The Ted Bundy Tapes," which is now on – what else? – Netflix. "When I started in the business 25 years ago, you know, we were knocking on the door of the entertainment industry, saying, 'Hey, pay attention to us!'"

He offers another reason documentaries are on fire these days: They're adopting techniques from scripted movies. "Scripted filmmakers and unscripted filmmakers, for the last couple of decades, have been borrowing ideas from each other," said Berlinger, "and therefore, the documentary has become much more creative."

Pogue encouraged Berlinger to brag a little, to identify his own contributions to the evolution of documentaries, especially in his first one, "Brother's Keeper," from 1992.

"We pushed the form in a couple of ways. For example, evocative title sequences, the use of an original music score, all these things that, a couple of decades ago, were unheard of in a documentary.

Thom Powers chooses the documentaries for the Toronto International Film Festival, and he runs America's largest documentary festival, DOC NYC. To him, documentaries are especially appealing because they can change the world.

Some of the most popular documentaries give a voice to victims of injustice or abuse, as in documentaries about Harvey Weinstein, Roger Ailes, Bill Cosby and R. Kelly.

Powers said, "Traditionally, the people who are now being accused, they've always held the power. And the fact that some of these victims are now speaking up, it's time to hear their stories."

One of those stories appears in HBO's new film, "Leaving Neverland." In it, Wade Robson and James Safechuck allege that Michael Jackson molested them as boys.

This past week, they spoke with "CBS This Morning"'s Gayle King:

Not surprisingly, Jackson's family gives this movie a thumbs down. They're suing HBO for $100 million, and they're claiming they weren't interviewed for it. After all, isn't a documentary supposed to be balanced? Isn't it journalism?

Pogue asked Fordham University film professor Jacqueline Reich, "Jackson's estate says, 'You never even talked to us.' Do they have a point?"

"A lot of people think a documentary is truth," Pogue said.

"But I think there's a difference between truth and objectivity. For instance, there's editing. There's sound. There's lighting. All of the things that we have right here in this report are gonna be in a documentary film as well."

"Wait, are you implying that news stories are edited, too?"

"Oh, we're gonna edit that right out!" he laughed.

As documentaries become more popular and more effective, their budgets and their earnings are going up, but they're still nowhere near as lucrative as Hollywood's biggest movies.

Here's how much money the top five scripted movies have earned:

— and the top five documentaries.

Pogue asked, "Is it still a hardscrabble, outsider, borrow money from your parents kinda thing?"

Yes, replied Powers: "No one would ever call it easy. It's still something you should discourage your kids from getting into unless they absolutely feel the calling to do it! And, you know, then, good luck to them."

Producer Dan Cogan would agree: "You do it because you believe in it, you're devoted to it, and you want to tell extraordinary stories at a high level that engage with the world in this moment, with real people, and real lives, and real consequences."