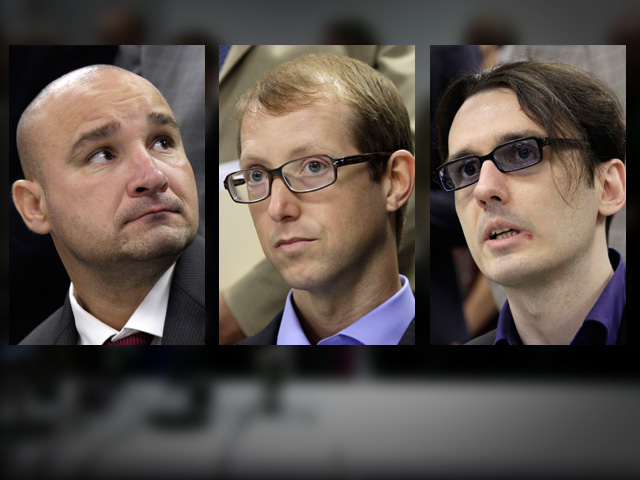 JONESBORO, Ark. - Three men convicted in the nightmarish slayings of three Cub Scouts went free Friday, nearly two decades after they were sent to prison in a case so gruesome it raised suspicions the children had been sacrificed in a Satanic ritual.

Doubts about the evidence against the trio had persisted for years and threatened to force prosecutors to put on a second trial in 2012.

Instead, the so-called West Memphis Three were permitted to plead guilty to murder in exchange for time served, ending a long long-running legal battle that had raised questions about DNA and witnesses — and attracted support from celebrities such as Johnny Depp and Eddie Vedder.

Damien Echols, Jason Baldwin and Jessie Misskelley entered the pleas under a legal provision that allowed them to maintain their innocence while acknowledging prosecutors have enough evidence to convict them.

"Although I am innocent, this plea is in my best interest," Misskelley said.

Echols had been on Arkansas' death row and in 1994 came within three weeks of execution. All three men were placed on 10 years' unsupervised probation. If they re-offend, they could be sent back to prison for 21 years.

Prosecutor Scott Ellington said it would be "practically impossible after 18 years to put on a proper trial in this case. I believe this case is closed, and there are no other individuals involved."

The victims' families were notified about the pact ahead of time but were not asked to approve it.

After Friday's hearing, Baldwin told reporters that he had been reluctant to plead guilty to crimes he didn't commit. But he agreed to the deal to get Echols off death row.

"That's not justice, however you look at it," he said.

He said the three would continue to work to clear their names.

Circuit Judge David Laser acknowledged the case was complex, and that both the victims' families and the supporters of the three men had suffered. He said Friday's deal would serve justice "the best we can."

"I don't think it will make the pain go away," Laser said.

One person yelled "Baby killers" as the three left the courtroom.

The killings were particularly shocking. The boys — Steve Branch, Christopher Byers and Michael Moore — were found naked and hogtied, and rumors of Satanism roiled the community in the weeks following their deaths. Branch and Moore drowned in about 2 feet of water; Byers bled to death and his genitals were mutilated and partially removed.

Police had few leads until receiving a tip that Echols had been seen covered in mud the night the boys disappeared. The big break came when Misskelley unexpectedly confessed and implicated Baldwin and Echols in the killings.

(At left, watch a "48 Hours" report on the West Memphis Three)

"Then they tied them up, tied their hands up," Misskelley told police in a statement, parts of which were tape-recorded. After describing sodomizing and other violence, he went on: "And I saw it and turned around and looked, and then I took off running. I went home. Then they called me and asked me, `How come I didn't stay? I told them, I just couldn't."'

Misskelley, then 17, later recanted, and defense lawyers said he got several parts of the story incorrect. An autopsy found there was no definite evidence of sexual assault. Misskelley had said the older boys abducted the Scouts in the morning, when they had actually been in school all day.

Misskelley was tried separately, convicted of first- and second-degree murder, and sentenced to life in prison plus 40 years. He refused to testify against the others, and his confession was not used as evidence.

The Arkansas Supreme Court upheld Echols' conviction and death sentence in 1996, saying there was still enough other evidence to sustain it.

A 1996 HBO documentary, "Paradise Lost: The Child Murders at Robin Hood Hills," drew the attention of celebrities including Vedder and Natalie Maines, lead singer of the Dixie Chicks. They and other celebrities helped fund a legal team that worked to win the three a new trial.

"Why are they innocent?" Vedder said in an interview with The Associated Press last year. "Because there's nothing that says they're guilty."

On Friday, Echols' wife, Lorri, sat in the front row of a crowded courtroom, next to the Pearl Jam frontman. Vedder put his arm around her during the proceedings.Last fall, the Arkansas Supreme Court ordered a new hearing for the three and asked a judge to consider allegations of juror misconduct and whether new DNA science could aid the men or uphold the convictions.

In upholding Echols' conviction in 1996, the state Supreme Court noted that two people testified that Echols bragged about the killings; an eyewitness put Echols at the scene; fibers similar to the boys' clothing were found in Echols' home; a knife was found in a pond behind Baldwin's home; Echols had an interest in the occult and told police that he understood the boys had been mutilated before officers had released such details.