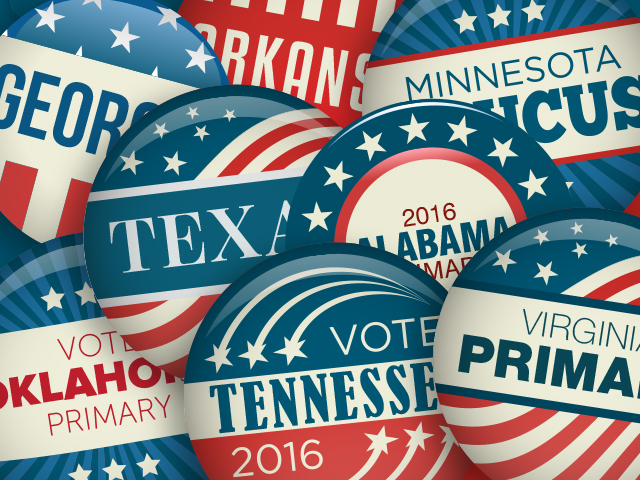 After a contentious primary season with huge surprises in both the Democratic and Republican races, Super Tuesday could bring some clarity to the 2016 election. Voters will convene for primaries or caucuses in more than a dozen states on Tuesday, and a significant chunk of delegates are at stake in both the GOP and Democratic races.

Here's a look at what to watch for on Super Tuesday:

How well will Hillary Clinton do?

Since launching his presidential campaign last year, Bernie Sanders has shocked the Democratic establishment. The relatively unknown Vermont senator, who identifies as a Democratic socialist, nearly beat Hillary Clinton in the Iowa caucuses and soundly defeated her in the New Hampshire primaries.

Even so, Clinton managed to pick up her fair share of delegates in those first two contests and has since re-established her position as the dominant front-runner for the Democratic nomination. Clinton crushed Sanders in South Carolina on Saturday, and her strong support from African-Americans suggests she should do very well in the multiple, large Southern states that vote on Super Tuesday. Recent polls suggest the same.

Be sure to watch for her margin of victory in states like Texas, Georgia and Virginia, where Clinton could tally up a large number of delegates. It's also important to watch for whether she can claim victory in some of the states that Sanders hopes to win -- such as Massachusetts or Minnesota. If she does, Sanders' momentum may have fizzled out for good.

Sanders, however, maintains that he plans to stay in the race all the way through to the Democratic convention this summer.

"You know, at the end of tomorrow I think 15 states will have spoken," he said Monday in Massachusetts. "Last I heard we have a lot more than 15 states in the United States of America, and I think it is more than appropriate to give all of those states and the people in those states a chance to vote for the candidate of their choice."

How well does Donald Trump do?

Republican front-runner Donald Trump is poised to do very well on Super Tuesday. He has a huge lead in a new national poll, while he's in first or second place in surveys out of the larger Super Tuesday states.

One thing to watch for will be his margins of victory: Will Trump effectively sweep Super Tuesday, or will he have to share delegates with Ted Cruz and Marco Rubio? It will also be worth watching the results, as well as exit polling, to find out what matters to voters: Do they care about the aggressive attacks, both personal and professional in nature, that Cruz and Rubio have thrown his way?

Another thing to watch is the GOP's reaction to Trump's performance. There are signs some in the establishment are ready to accept Trump as their nominee. For instance, he recently received his first Senate endorsement, from Sen. Jeff Sessions of Alabama. On the other hand, Trump revealed on CBS' Face the Nation on Sunday that he doesn't feel he has the support of the Republican Party. Meanwhile, GOP insiders like Mitt Romney continue to criticize Trump.

Will Ted Cruz win in Texas?

As far as Ted Cruz's campaign is concerned, the most important thing to watch on Tuesday night is the results out of Texas. After two disappointing third-place finishes in South Carolina and Nevada, Cruz's campaign has lost some of its luster. Losing his home state to Donald Trump would cast serious doubt on Cruz's viability. The senator has endorsements from several other Texas Republicans, including Gov. Greg Abbott, former Gov. Rick Perry and Lt. Gov. Dan Patrick. Cruz also has an army of about 27,000 volunteers in the state.

The most recent CBS News battleground tracker shows Cruz with the lead in Texas, but not a huge one: Tellingly, Cruz spent all day Monday in Texas, instead of visiting other large, critical states that are voting Tuesday, such as Georgia or Virginia.

How well does Marco Rubio do?

Marco Rubio needs a win. The Florida senator is one of the most viable conservative alternatives to Trump still standing, but he has yet to win a primary or caucus state. Putting at least one victory on the board on Super Tuesday would provide some reassurance as his campaign heads into another critical round of primaries on March 15.

However, even if Rubio doesn't claim victory anywhere on Tuesday, he could still make the case to voters that he can win the nomination. Given that the delegates on Tuesday may be awarded on a proportional basis, it's important to watch whether Rubio meets the necessary threshold to win any delegates at all. For instance, the Republican Party in Texas (where 155 delegates are at stake) requires a candidate to receive at least 20 percent support before they're eligible for delegates.

If Rubio can secure some delegates, he could very well start to catch up to Trump in the delegate race on March 15, when several large states hold their primaries. Some of those states, including Rubio's home state of Florida, allocate delegates on a winner-take-all basis. Losing Florida's 99 delegates -- and losing the support of his own constituents -- would be a devastating blow to his campaign.

Will Ben Carson drop out?

The retired neurosurgeon had his moment in the spotlight in 2015, but since the primary race began in earnest, Ben Carson has fallen seriously behind. He won just 2 percent support in New Hampshire, came in last with 7 percent of the vote in South Carolina and won just 5 percent in Nevada, beating only Ohio Gov. John Kasich.

Kasich's campaign insists it sees a path forward, which depends on merely surviving March 1 in order to perform well in Michigan on March 8. It's less, clear, however, what Carson's path forward is. If Carson on Tuesday continues to perform as poorly as he has so far, he'll have to seriously consider the future of his campaign.

"We'll find out a lot on Super Tuesday," Carson said to CBS News chief White House correspondent Major Garrett after last week's GOP debate. Carson refused to say whether there's a threshold of support he must receive to keep his campaign going, but he told Garrett, "There's no question I'll be looking very carefully at the results and making an assessment."