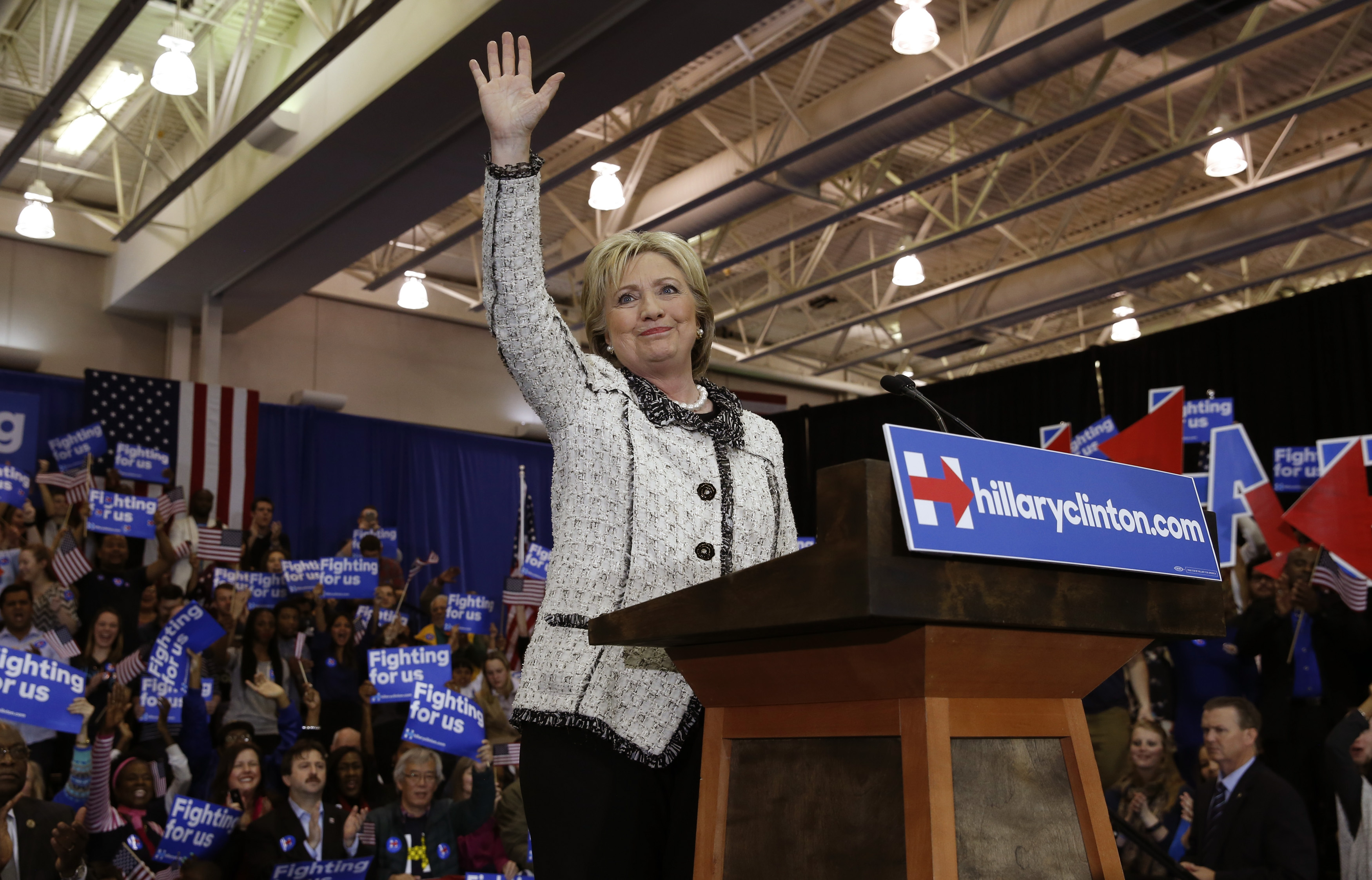 With about three out of four South Carolina Democratic primary voters supporting Hillary Clinton on Saturday, the former secretary of state won the convincing victory she needed to reclaim her title as the clear front-runner for the Democratic nomination.

Clinton's decisive victory gives her a serious lead over Sen. Bernie Sanders in the delegate count, while her strong support among African-American voters leaves her poised to gain an even greater foothold in the race on Super Tuesday.

With the wind at her back, Clinton on Saturday night clearly had her eye on the general election.

"Despite what you hear, we don't need to make America great again, America has never stopped being great," she said in Columbia, previewing her potential campaign against Donald Trump, the current Republican front-runner. "But we do need to make America whole again. Instead of building walls, we need to be tearing down barriers."

At the same time, Clinton seemed to acknowledge that she doesn't have the nomination locked down just yet.

Eleven states and one territory will hold their Democratic primaries or caucuses in just a few days on Super Tuesday. Clinton is very likely to rack up an even larger lead in the delegate count, thanks to large states like Texas, Georgia and Alabama, which demographically are similar to South Carolina.

At the same time, Sanders is sure to do well in a handful of Super Tuesday states. He told reporters travelling with him after his South Carolina loss, that "over 800 delegates are at stake and we intend to win many, many of them." Those anticipated victories, combined with a decent performance in the larger states, may allow Sanders to sustain his campaign -- particularly given the cash he's raised in recent months.

Sanders did indeed win a decisive victory in the New Hampshire primary with his promise to tackle income inequality. It's an issue that clearly resonates with voters, even in South Carolina: Nearly eight out of 10 primary voters on Saturday said the U.S. economic system favors the wealthy.

However, while Sanders has premised his campaign on the need to address this problem, it's been a relatively easy issue for Clinton to co-opt -- while chiding Sanders for failing to look past it.

"We need to show with everything we do, that we're really in this together -- too many people at the top, too many corporations, have forgotten this truth," Clinton said Saturday. "It's important that Wall Street never threaten Main Street again... But America isn't a single-issue country, my friends. We need more than a plan for the biggest banks. The middle class needs a raise, and we need more good jobs, jobs that pay well and can't be outsourced. Jobs that provide dignity and a path to a brighter future."

Just about a fifth of voters in South Carolina said that income inequality is the most important issue facing the country, according to CBS News exit polling. Around twice as many said the economy and jobs are the most important.

Meanwhile, Sanders overwhelmingly lost the African-American vote: 87 percent of black voters in South Carolina sided with Clinton. Sanders has made concerted efforts to talk about issues like racial disparities in the justice system, while campaigning with prominent African Americans like rapper Killer Mike and former NAACP president Ben Jealous. Even so, just 59 percent of South Carolina voters said they would trust Sanders to handle race relations, while 85 percent said they would trust Clinton to do so.

Sanders has just a few days left to bolster his support among black voters before Democrats in states like Georgia and Alabama head to the polls. Yet as he now turns his attention to states like Minnesota, where he'll be more likely to find support, Clinton seems poised to take home more large victories on Super Tuesday.

Already, polls out of Texas for the past month have shown Clinton with a double-digit lead over Sanders. The same is true in Georgia and Virginia. Her large lead in these states is noteworthy, given that most of the Democratic delegates are awarded proportionally. Additionally, Clinton will almost certainly build up her huge lead in support from superdelegates -- party officials who are free to support whom they please.

As Clinton racks up her delegate count, it will be harder and harder for Sanders to catch up.