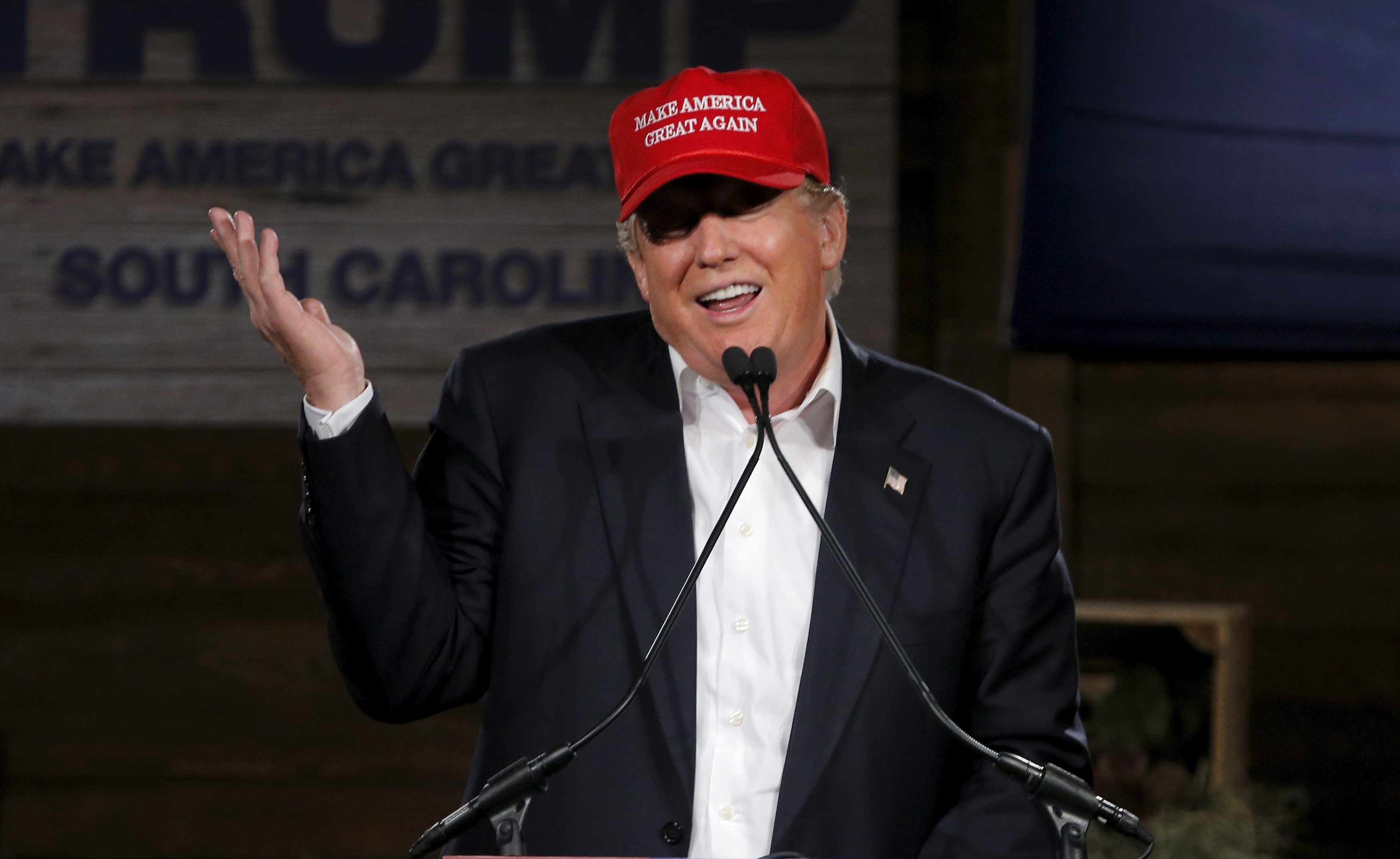 GILBERT, S.C. -- Republican presidential Donald Trump found himself in an unfamiliar place on Wednesday night: a packed barn in Gilbert, South Carolina, a rural town in Lexington County. Behind him, there were strategically placed collard greens and red bell peppers freshly picked at a nearby farm. The ceiling was laced with Christmas lights.

Trump donned a red Make America Great Again hat, popular among his supporters but something he hasn't worn recently. Trump told the crowd that he put the hat on specifically because he was in a barn.

The headline on most minds this evening, as thousands of supporters packed inside and more waited outside, was what Trump would be doing Thursday evening instead of attending the Fox News Republican debate.

"From here, where do I go? Iowa," Trump said. "What am I gonna do there? ...You know what we're going to do? We're gonna raise a lot of money for the vets. That's what we're gonna do."

Trump announced before the rally that he would hold an event Thursday evening at Drake University at the same time as the Fox News Republican debate. There, it all of his fellow Republican presidential candidates will be duking it out, with Trump likely the target of many conversations - with or without him there. Trump's campaign said the event will benefit still unnamed veterans groups.

There was one other reference to the upcoming debate during his speech, albeit indirectly. Trump brought up, without naming her, Fox News anchor Megyn Kelly, who has been the subject of his scorn since the first GOP debate in Cleveland last August.

"I never debated," Trump said. "I had no idea. It worked out fine. I got a very unfair question from somebody but we don't need to talk about that."

He let out a laugh and said again, "We don't talk about that."

The barn held about 1,500 people, according to a fire marshal. The temperature was about 51 degrees outside, but much warmer inside due to the large crowd.

During Trump's speech, one woman fainted. As she was being carried away, Trump joked, "Maybe she fainted at how good looking I am," after wishing her well.

Susan Lepping, 69, drove almost two hours from her home in Augusta, Georgia, to attend her second Trump rally. She's a retired disabled veteran who spent 27 years in the Army.

"Retirement is great," Lepping said. "Now I have more time to go for Trump, Trump, Trump!"

"I listened to Donald," Lepping went on. "And he tells the blue-collared worker exactly what we need to hear. Things get to Washington - "We're gonna do this, we're gonna do that.' It never happens."

When asked if she was more attracted to his personality or his policies, Lepping said, "I'm into his personality and his can-do attitude - his upbeat attitude and his tell-you-like-it-is... no punches barred. If you ask Donald a question, he's gonna give you an answer."

The refrain is the same as supporters flock to Trump rallies - and as endorsements start to pile up. Before the speech, Trump was endorsed by South Carolina lieutenant governor Henry McMaster, an establishment Republican who shocked other members of his party by endorsing Trump.

McMaster is a key ally of current South Carolina governor Nikki Haley. He was once the state party's chair and endorsed 2008 Republican nominee Sen. John McCain and former ambassador to China Jon Huntsman in 2012.

McMaster, speaking in a thick South Carolinian accent and a high-pitched voice, urged the crowd to support Trump. He called the South Carolina the "best state" in the country. He cited Archimedes, an ancient Greek mathematician for whom the Law of the Lever is named.

He closed saying, "Now is the time for Donald Trump."

The speech was mostly the same stump speech Trump has given over the last six months, albeit shorter - 45 minutes compared to the usual hour. It had broadsides against China and the Iranian nuclear deal. He cited his soaring poll numbers and received big applause for saying he was self-funding his campaign - except, of course, for the fact that as of his last campaign filing, he wasn't.

Thursday night will bring uncharted territory for Trump, if he actually goes through with skipping the Fox News debate. Either way, the spotlight will be on the GOP frontrunner. It's just a question of where.