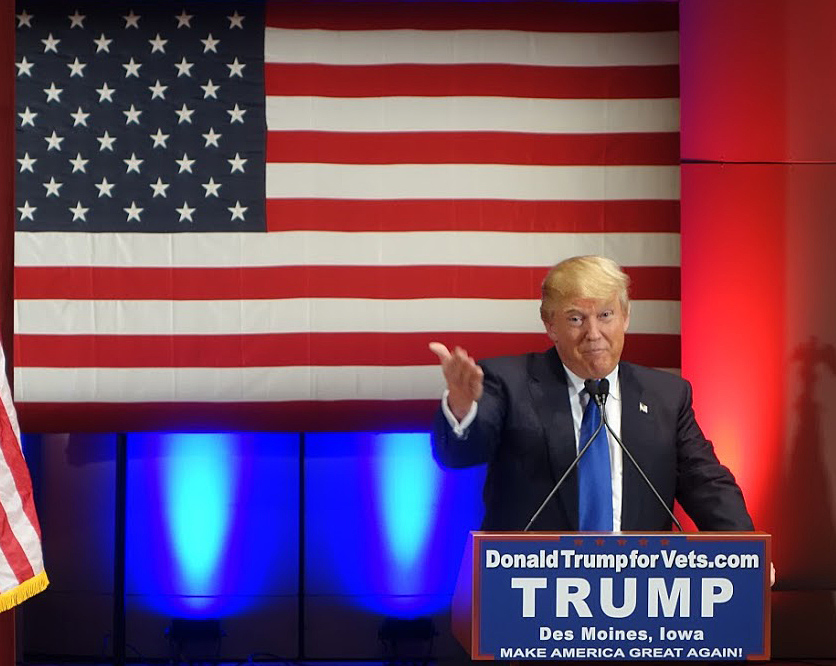 Donald Trump not surprisingly claims he's the victor in the fight with Fox News Thursday night, after he held his own impromptu veterans benefit in Des Moines, Iowa in lieu of attending the network's Republican primary debate.

"Fox has been extremely nice the last number of hours actually," Trump told a crowd of supporters gathered at Drake University. "And they've wanted me there."

"We're actually told we have more cameras than they do by quite a bit," Trump crowed, going on to compare his event to the Academy Awards.

He tweeted that the event raised millions for veterans:

Trump personally contributed $1 million to the cause, according to his campaign, which also said the fundraiser would benefit 22 different organizations, including several Iowa-based veterans groups. It declined to name any of the organizations.

During his event, Trump called out the names of some of the major event donors, including business mogul Carl Icahn and billionaire casino magnate Phil Ruffin, who also made an appearance on stage Thursday.

Trump staged the veterans rally after two days of threats to skip the last Republican debate before the nation's first voting contest, the Iowa caucuses on Feb. 1. Complaining that Fox News debate moderator Megyn Kelly was a "biased" journalist, the GOP contender finalized his decision to withdraw from the debate after the network issued a mocking statement about his objections.

At Trump's competing event, held at Drake University, just three miles away from the Republican debate venue, he continued to bash Fox News, saying that "when you're treated badly you have to stick up for your rights."

"That's what our country has to do," Trump said. "We have to stick up for our country when we're being mistreated."

In an interview with CNN before his rally, Trump said he had spoken to network representatives who had issued an apology.

"Fox could not have been nicer," he told CNN.

On Thursday, the network put out its own statement about phone calls with Trump.

"Roger Ailes had three brief conversations with Donald Trump today about possibly appearing at the debate - there were not multiple calls placed by Ailes to Trump," a Fox News spokesperson said in a statement Thursday night. "In the course of those conversations, we acknowledged his concerns about a satirical observation we made in order to quell the attacks on Megyn Kelly, and prevent her from being smeared any further."

Trump, according to Fox News, offered to appear at the debate if Fox met one condition -- that the network contribute $5 million to his charities.

The network said it refused, citing journalistic standards and a desire to stand by anchor Megyn Kelly.

"We explained that was not possible and we could not engage in a quid pro quo, nor could any money change hands for any reason," the statement read.

A source close to Fox News told CBS News that Ailes reached out to Trump twice. Trump reached out once.

Some voters at Trump's rally praised the billionaire's decision to skip a primetime GOP event in favor of a benefit for an important cause.

"I don't consider the debates anything that is considered a debate anymore," Carl Stoffer, a 67-year-old Navy veteran from Besse, Iowa, told CBS News. "It is more of a show for whoever the moderators are. They are gonna sharp shoot the candidates."

"He is setting the tone that he doesn't need to follow anyone else," Nathan Bowden, 35 years old and an Iowa resident, said before Trump's event. "He tells it like it is and that is something I admire about him."

"Well I didn't hear that the veterans didn't want anyone's money," Phathen, a 64-year-old veteran from Omaha, said. "Trump's money is as good as anyone else. I believe he has a heart of gold as far as veterans are concerned."