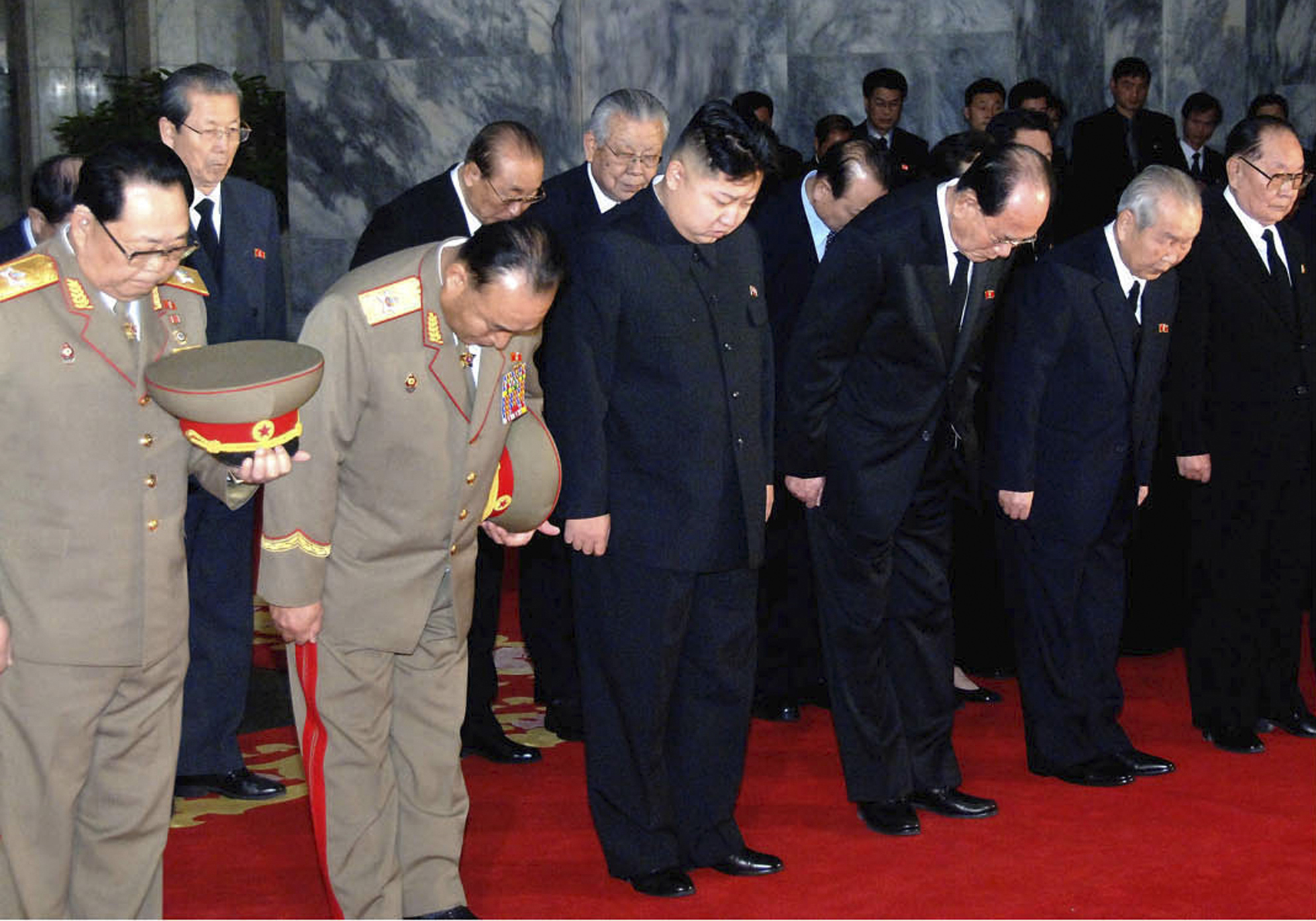 PYONGYANG, North Korea - North Korea's anointed heir Kim Jong Un led a solemn procession of mourners Tuesday to the glass coffin of his father and longtime ruler — a strong indication that a smooth leadership transition was under way in the country known for secrecy and unpredictability.

Weeping members of North Korea's elite filed past the body of Kim Jong Il, which was draped in red cloth and surrounded by stony-faced honor guards and dozens of red and white flowers.

State media fed a budding personality cult around his youngest known son, hailing him as a "lighthouse of hope" as the country was awash in a "sea of tears and grief."

In a dreamlike scene captured by Associated Press Television News, Kim's coffin appeared to float on a raft of "kimjongilia" — the flowers named after him — with his head and shoulders bathed in a spotlight as solemn mustic played. Various medals and honors were displayed at his feet.

The bier was located in a hall of the Kumsusan Memorial Palace, a mausoleum where the embalmed body of Kim Jong Il's father and North Korean founder Kim Il Sung has been on view in a glass sarcophagus since his death in 1994.

Kim Jong Il's 27-year-old son and heir, Kim Jong Un, wore a black Mao-style suit, his hair cropped closely on the sides but longer on top, as he walked with much older officials in suits and military uniforms.

Stepping away from the group, Kim Jong Un bowed deeply, his expression serious, before circling the bier with other officials.

But there have been no signs of unrest or discord in Pyongyang.

With the country in an 11-day period of official mourning, flags were at half-staff at all military units, factories, businesses, farms and public buildings. The streets of Pyongyang were quiet, but throngs gathered at landmarks honoring Kim.

Outside one of the capital's main performance centers, mourners carried wreaths and flowers toward a portrait of Kim Jong Il. Groups were allowed to grieve in front of the portrait for a few minutes at a time.

"We will change today's sorrow into strength and courage and work harder for a powerful and prosperous nation, as our general wanted, under the leadership of the new general, Kim Jong Un," Pyongyang resident U Son Hui told The Associated Press.

Kim Jong Il died of a heart attack on Saturday caused by overwork and stress, according to North Korean media. He was 69 — although some experts question the official accounts of the date and place of his birth.

A state funeral is set for Dec. 28 in Pyongyang, to be followed by a national memorial service the next day, according to state media. North Korean officials say they will not invite foreign delegations and will allow no entertainment during the mourning period.

Since Kim's death, the media stepped up their lavish praise of the son, indicating an effort to strengthen a cult of personality around him similar to that of his father and — much more strongly — of his grandfather, Kim Il Sung.

The Korean Central News Agency on Tuesday described Kim Jong Un as "a great person born of heaven," a propaganda term previously used only for his father and grandfather. The Rodong Sinmun, the newspaper of the ruling Workers' Party, added in an editorial that Kim Jong Un is "the spiritual pillar and the lighthouse of hope" for the military and the people.

It described the young Kim as "born of Mount Paektu," one of Korea's most cherished sites and Kim Jong Il's official birthplace. On Monday, the North said in a dispatch that the people and the military "have pledged to uphold the leadership of comrade Kim Jong Un" and called him a "great successor" of the country's revolutionary philosophy of juche, or self-reliance.

Young Koreans, the North reported, "are burning with the faith and will to remain loyal to Kim Jong Un."

Concerns remain, however, over the transition.

South Korea put its military on high alert and experts warned that the next few days could be a crucial turning point for the North, which though impoverished by economic mismanagement and repeated famine, has a relatively well-supported, 1.2 million-member armed forces.

South Korea offered sympathy to the North Korean people, but the government said no official delegation will be sent.

Kim's death could set back efforts by the United States and others to get Pyongyang to abandon its nuclear weapons program. Concerns are also high that the young and untested Kim Jong Un may feel he needs to prove himself by precipitating a crisis.

Kim Jong Il was in power for 17 years after the death of his father and was groomed for power before that. Kim Jong Un only emerged as the likely heir in the past year.

Absent from any mention by the state media were Kim Jong Il's other sons, Kim Jong Nam and Kim Jong Chol. Kim Jong Nam, the eldest, is widely believed to have fallen out of favor after embarrassing the government in 2001 by being caught trying to enter Japan on a fake passport, saying he wanted to visit Tokyo Disneyland. He reportedly enjoys gambling and has lived in Macau.

North Korea conducted at least one short-range missile test Monday, South Korean officials said. But they saw it as a routine drill.

"The sudden death of Kim Jong Il has plunged the isolated state of North Korea into a period of major uncertainty. There are real concerns that heir-apparent Kim Jong Un has not had sufficient time to form the necessary alliances in the country to consolidate his future as leader of the country," said Sarah McDowall, a senior analyst with U.S.-based consultants IHS.

Some analysts, however, said Kim's death was unlikely to plunge the country into chaos because it already was preparing a transition. Kim Jong Il indicated a year ago that Kim Jong Un would be his successor, putting him in high-ranking posts.

President Hu Jintao of China offered his condolences at North Korea's embassy in Beijing as the government hinted at an early invitation for a visit by Kim Jong Un.

China's response to Kim Jong Il's death highlights the government's growing emphasis on North Korean ties despite its annoyance at the North's refusal to reform its listless economy and its recurring provocative acts against South Korea that raise tensions in the region.