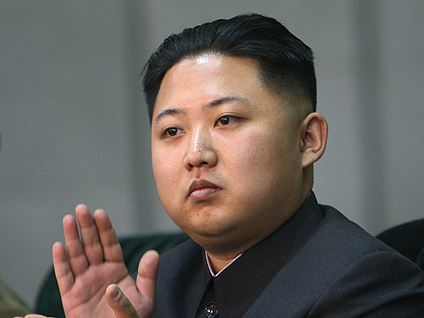 Story updated 12/20/11. Scroll down for editor's note at the bottom of this post.

What's happening inside North Korea is a mystery. We can't be sure who's in charge of the impoverished nuclear power with a history of unprovoked violence.

On Sunday night, North Korea announced its dictator - Kim Jong Il - died suddenly of a heart attack. He had been in poor health since suffering a stroke.

Standing between North and South Korea right now are 30,000 American troops - a force in place since the end of the Korean War. The Kim's have ruled North Korea for 63 years - the longest running hereditary dictatorship in the world. It appears they intend to continue that streak.

There was an outpouring of grief for the man who starved his people while building a nuclear weapon. His youngest son and apparent successor, Kim Jong Un remained out of sight Monday.

We don't know much about Kim Jong Un. He's Thought to be in his late twenties. The CIA had only one photo of him from his time spent in college in Switzerland under a false name. It's not known whether he's married or has children.

He was named his father's successor after Kim Jung Il's stroke in 2008.

Kim Jong Un's debut came last year at a parade. When he strode to the reviewing stand along with his father, CBS News correspondent Jim Axelrod was there.

At the time, Axelrod reported: "The government has invited in the Western media not just to see the country flex its military muscle, but send an important military message about its future."

The message delivered on Monday by North Korean state media stopped short of calling Kim Jung Un the country's next leader, but it did call him a "great successor."

One of the few Americans to negotiate with North Korea is former U.N. Ambassador and former Governor of New Mexico Bill Richardson. He's gone there as a special envoy eight times.

"What's interesting in this situation is that Kim Jong Un, the successor, has not been in military, has little experience in policy making and is also untested. So the military now will, in my judgment, assume even more power," Richardson said.

The former special envoy said he doesn't expect the younger Kim to actually be running things.

"He will be the titular head. He'll have power, but not like his father," Richardson said.

The Kim dynasty began with Kim Il Sung in 1948 when the country of North Korea was born. Kim Jong Il inherited power in 1992, and since then he has presided over a series of famines. It's estimated as many as two million North Koreans have starved to death.

Kim Jung Il lived a lavish and eccentric lifestyle. He was a fan of Hollywood movies, and owned 20,000 of them.

Richardson sees his passing as a rare opportunity.

"It's very important that we not provoke them, we let them have their transition, that we engage them, that we continue to talk to them, because isolating them has never worked," Richardson said.

North Korea is isolated by its poverty. Satellite photos taken at night over the Korean peninsula show South Korea and neighbor China lit up every night, but the North a pocket of darkness when the sun goes down.

We made a mistake last night on the "CBS Evening News with Scott Pelley" that I'd like to tell you about.

The mistake was corrected in time for the West Coast edition of the Evening News.

In our coverage of the death of the North Korean president, Kim Jung Il, we recalled the sinking of the South Korean naval vessel, Cheonan, on March 26, 2010. The ship was hit by a North Korean torpedo. In our story, we showed video of a warship at the moment it is hit by a torpedo and destroyed. However, the attack the video depicted was not the North Korean assault of 2010. The video actually showed an Australian vessel struck by a torpedo in a test.

So, how did this happen?

A lot of great people expend enormous effort to verify everything on the Evening News but, this time, we made a mistake.

No excuses. We were wrong.

When we make a mistake, we want to be the first to tell you.