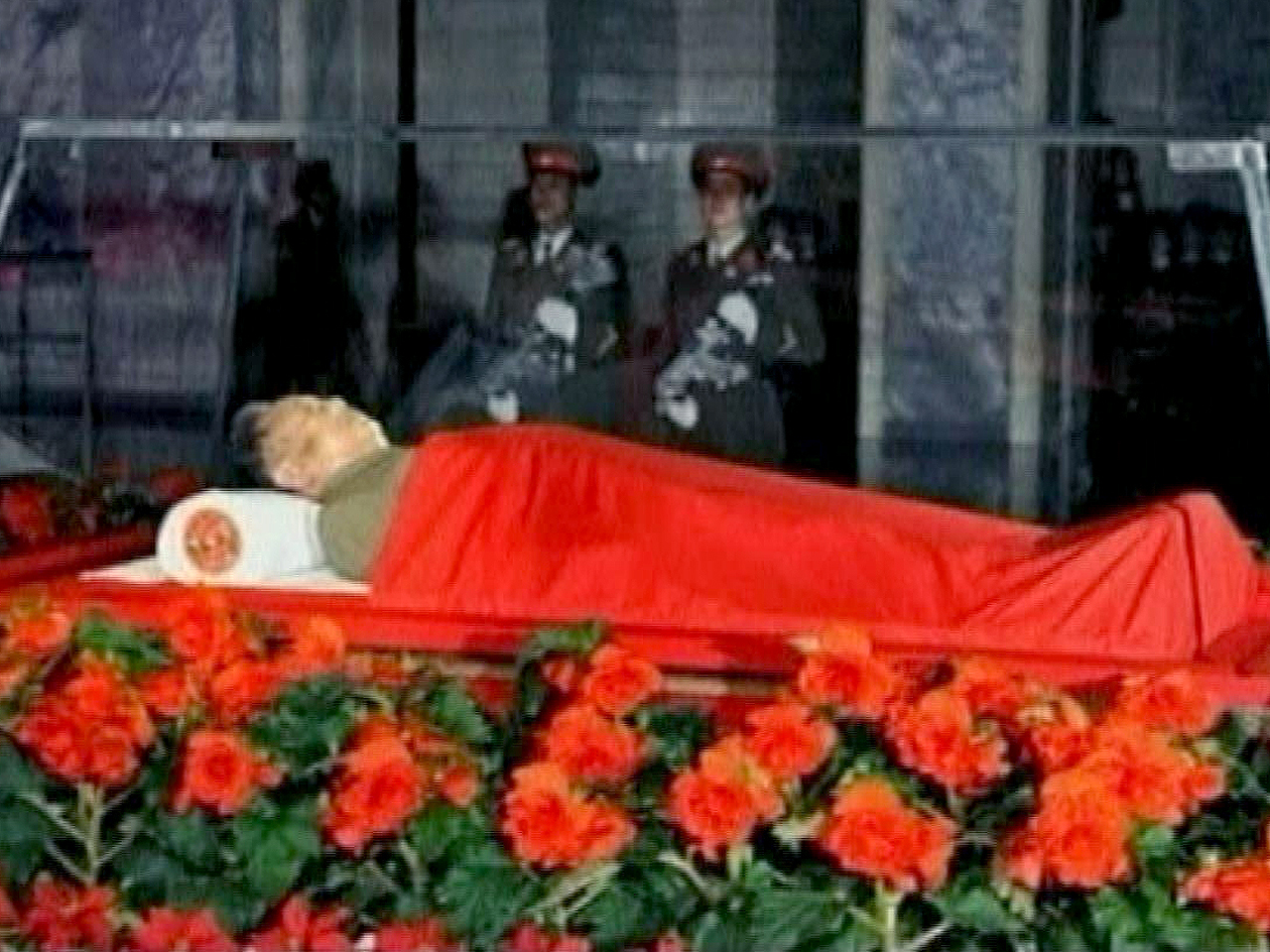 PYONGYANG, North Korea - The body of North Korea's long-time ruler Kim Jong Il was laid out in a glass coffin Tuesday as weeping mourners filled public plazas and state media fed a budding personality cult around his third son, hailing him as "born of heaven."

North Korea's official television showed still photos of Kim in the coffin surrounded by wreaths, his body covered with a red blanket and his head on a white pillow. A giant red curtain covered a wall behind Kim.

Kim Jong Un — Kim's third son and successor — visited the coffin along with top military and Workers' Party officials and held a "solemn ceremony" as the country mourned, state TV said. One woman apparently wiped tears from her eyes.

Kim died of a massive heart attack caused by overwork and stress, according to the North's media. He was 69 — though some experts question the official accounts of his birth date and location.

Although there were no signs of unrest or discord in Pyongyang's somber streets, Kim's death and the possibility of a power struggle in a country seeking nuclear weapons and known for its secrecy and unpredictability have heightened tensions in the region.

With the country in an 11-day period of official mourning, flags were flown at half-staff at all military units, factories, businesses, farms and public buildings. The streets of Pyongyang were quiet, but throngs of people gathered at landmarks honoring Kim, footage from Associated Press Television News in Pyongyang showed.

Kim's body was in the Kumsusan Memorial Palace, a mausoleum where the embalmed body of his father — national founder Kim Il Sung — has been on display in a glass sarcophagus since his death in 1994.

The state funeral is to be held there on Dec. 28.

"Our General (Kim Jong Il) is our people's benevolent father," said Ri Ho Il, a lecturer at the Korean Revolutionary History Museum. "He defended our people's happiness, carrying on his forced march both night and day."

North Korean officials say they will not invite foreign delegations and will allow no entertainment during the mourning period.

North Korean state media have given clear indications that Kim Jong Un will succeed him. Since Kim's death they have stepped up their lavish praise of the son, indicating an effort to strengthen a cult of personality around him similar to that of his father and — much more strongly — of Kim Il Sung.

The Korean Central News Agency on Tuesday described Kim Jong Un as a "a great person born of heaven," a propaganda term only his father Kim Jong Il and his grandfather Kim Il Sung had enjoyed. The Rodong Sinmun, the newspaper of the ruling Workers' Party, added in an editorial that Kim Jong Un is "the spiritual pillar and the lighthouse of hope" for the military and the people.

It described the twenty-something Kim as "born of Mount Paektu," one of Korea's most cherished sites and Kim Jong Il's official birthplace. On Monday, the North said in a dispatch that the people and the military "have pledged to uphold the leadership of comrade Kim Jong Un" and called him a "great successor" of the country's revolutionary philosophy of juche, or self reliance.

But concerns remain over whether the transition will be a smooth one.

Soon after the death was announced Monday, President Barack Obama agreed by phone with South Korean President Lee Myung-bak to closely monitor developments. Japan's government also said it was being vigilant for any "unexpected developments."

South Korea's military has been put on high alert, and experts warned that the next few days could be a crucial turning point for the North, which though impoverished by economic mismanagement and repeated famine, has a relatively well-supported, 1.2 million-strong armed forces.

Kim's death could set back efforts by the United States and others to get Pyongyang to abandon its nuclear weapons ambitions. Concerns are also high that Kim Jong Un — being young and largely untested — may feel he needs to prove himself by precipitating a crisis or displaying his swagger on the international stage.

Kim Jong Il was in power for 17 years after the death of his father, and was groomed for power years before that. Kim Jong Un only emerged as the likely heir over the past year.

North Korea conducted at least one short-range missile test Monday, South Korean officials said. But they saw them as a routine drill.

"The sudden death of Kim Jong Il has plunged the isolated state of North Korea into a period of major uncertainty. There are real concerns that heir-apparent Kim Jong Un has not had sufficient time to form the necessary alliances in the country to consolidate his future as leader of the country," said Sarah McDowall, a senior analyst with U.S.-based consultants IHS.

Some analysts, however, said Kim's death was unlikely to plunge the country into chaos because it already was preparing for a transition. Kim Jong Il indicated a year ago that Kim Jong Un would be his successor, putting him in high-ranking posts.

South Korea's president urged his people to remain calm while his Cabinet and the Parliament convened emergency meetings Tuesday. Unification Minister Yu Woo-ik said his government is refraining from moves that may exasperate North Korea.