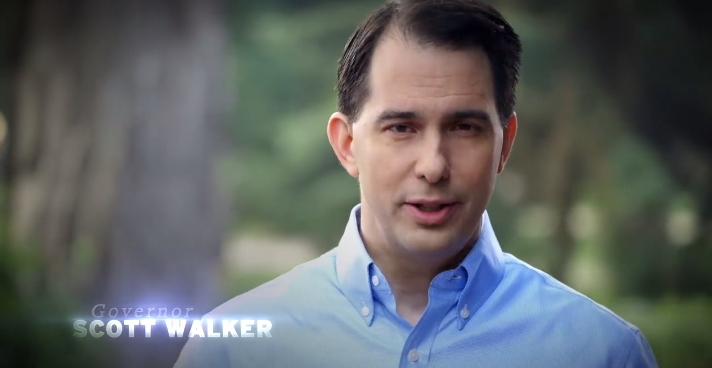 Wisconsin Gov. Scott Walker officially joined the 2016 presidential race Monday morning with a tweet and Facebook video, making him the 15th Republican who will compete for the GOP nomination.

I'm in. I'm running for president because Americans deserve a leader who will fight and win for them. - SW http://t.co/DZG253QjfP #Walker16

In a video released on Facebook, Walker speaks straight to camera and tells his audience America needs fresh leadership.

"Wisconsin, we didn't nibble around the edges. We enacted big, bold reforms and took power out of the hands of big government special interests, gave it to the hardworking taxpayers," he said.

Weighing in on the other 14 candidates he will face for the GOP nomination, Walker says, "There are some who are good fighters, but they haven't won those battles. There are others who have won elections but haven't consistently taken on the big fights. We showed you can do both."

I'm in. I'm running for President of the United States because Americans deserve a leader who will fight and win for them. SHARE if you stand with me. Support at ScottWalker.com! -SW

Walker will hold a rally Monday evening in Waukesha, Wisconsin, to make the announcement in person.

His team picked the site of his 2012 recall election rally, a key victory over political opponents who had initiated the recall effort after he weakened public employee unions. Walker has talked about how he "stood his ground, unintimated" in the face of threats to his family. It's a message he's taken to Iowa and turned it into an early and persistent lead in the polls.

His political martyr story combined with his record of electoral success (three gubernatorial victories in four years) and his "I'm just a regular guy" schtick (see: "Scott Walker and Kohl's") will be front-and-center as he kicks off his campaign today and this week. Following the announcement speech, he'll barnstorm through four early primary and caucus states with an emphasis on his regular-guy theme with stops at Harley-Davidson dealers in each state, barbecue in South Carolina, a diner in New Hampshire., and a Winnebago tour through Iowa.

"Being one in 50 people in America to be governor is unbelievable for a kid who grew up in a small town with a dad who's a pastor and mom who's a part-time secretary," Walker told WTMJ radio on Friday in previewing his announcement.

What he'll argue sets him apart from the other 14 declared candidates, however, is his ability to not only "fight" but to win those fights. According to speech excerpts released by his campaign, Walker will hammer home the message about taking power away from special interests. He'll focus on the principles of growing the economy, reforming Washington and making America safer.

It was Walker's decision to take on organized labor that made him a national name - and a profile in courage for conservative activists. In 2011, Walker proposed a bill that would have eliminated collective bargaining rights for most public employee unions in Wisconsin. The move sparked raucous protests at the State Capitol building in Madison and prompted Democratic state lawmakers to literally flee the state to deprive Republicans of the votes needed to proceed.

The bill ultimately passed - over the objections of Democrats and unions - but the furor surrounding its passage resulted in an effort to recall Walker from office. After a fierce battle, Walker prevailed on June 5, 2012, becoming the first governor in U.S. history to survive a recall attempt.

"He's the strongest anti-union Republican in the bunch, and that's an issue that resonates both with average Republicans, but also with business Republicans that give a lot of money to the party," Julian Zelizer, a presidential historian at Princeton University, told CBS News earlier this year. "It defines him."

But there are several potential cracks in the Walker foundation. He faces dropping approval ratings at home in the face of tough fiscal and economic realities; there are serious questions about his readiness for the national stage, especially the total absence of foreign policy experience from his resume; and he has to deal with some skepticism from hardcore conservatives over his shifting rhetoric on some red-meat issues like same-sex marriage, immigration and education.

Still, he has proven to be an exciting prospect for Republican voters, which has kept him consistently in the top two or three candidates in polls this year.