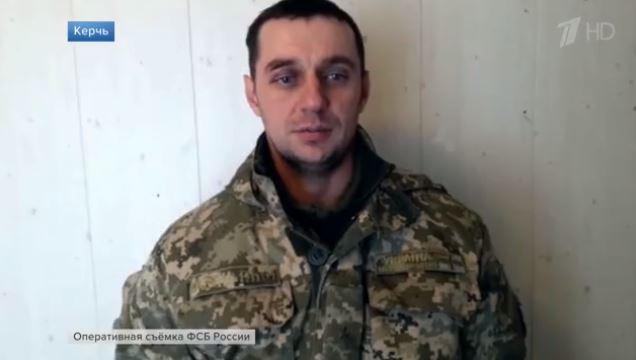 MOSCOW -- Russia has released video of a group of captured Ukrainian sailors giving oral confessions to deliberately violating Russian territory. Russian security forces seized the sailors and their Ukrainian military vessels on Monday in the Kerch Strait in a maritime standoff which has seen tensions between the two neighbors spike. It was not clear whether the sailors' confessions, given in the custody of Russia's security services, were made under duress.

Russia says the Ukrainian vessels sparked the confrontation by refusing to yield upon orders from Russian border forces to change their course in Russian territorial waters.

Ukrainian officials insist it was Russian border guards who first rammed into and opened fire on the three Ukrainian navy vessels as they were trying to make their way from the Black Sea toward a Ukrainian port.

On Monday, U.S. Ambassador to the United Nations called on Russia to "immediately cease its unlawful conduct" in the Black Sea near Crimea during a United Nations Security Council meeting called over the incident.

"We call on Russia to respect its international obligations and not obstruct or harass Ukraine's transit in the Kerch Strait, to release the seized Ukrainian ships and crew and to de-escalate the tensions it has created," Haley told the Council, CBS News' Pamela Falk reported.

In response to the incident, the Ukrainian parliament adopted a motion by the president to impose martial law for 30 days, something that Ukraine avoided doing even when Russia annexed its Crimean peninsula or sent in clandestine troops and weapons to the war-torn east.

The Kremlin warned on Tuesday that the martial law order, which will take effect in parts of Ukraine on Wednesday, might trigger renewed hostilities in the separatist-held east.

Russia and Ukraine traded blame for the confrontation that raised the specter of a full-blown conflict between the neighbors. Ukraine said its vessels were heading to the Sea of Azov in line with international maritime rules, while Russia charged that they had failed to obtain permission to pass through the narrow Kerch Strait that is spanned by a bridge that Russia completed this year.

Dmitry Peskov, spokesman for Russian President Vladimir Putin, warned on Tuesday that the martial law introduced in 10 Ukrainian regions "has the potential" of triggering a flare-up in hostilities in the country's east.

Russian-backed separatists in Ukraine's industrial heartland that borders Russia have been fighting Ukrainian troops since 2014, but the hostilities have largely subsided since a truce was signed in 2015.

Putin and German Chancellor Angela Merkel spoke on the phone in the early hours on Tuesday, and the Russian president expressed a "serious concern" about what the martial law in Ukraine might entail.

Meanwhile, German Foreign Minister Heiko Maas said Tuesday that Berlin has "called on Russia and Ukraine to show the greatest possible restraint" and suggested that Germany, France, Russia and Ukraine could work together to resolve the tensions.

Asked about other offers of mediation that were made previously, Peskov said Russia has no need for it because it views the standoff in the Black Sea as a simple case of a violation of its border.

As the video of the Ukrainian sailors was aired on Russia's state-run media Tuesday, Russia's Federal Security Service (FSB) claimed that two Ukrainian intelligence officers were among the 24 sailors in detention, and said they were in charge of "the provocation."

The FSB statement said the alleged operation was "coordinated by two members of the Ukrainian Security Service assigned to the crews of the military boats."

The FSB accused Ukraine of, "provocative actions... carried out on direct orders from the Ukrainian authorities." The security service said the waters in which the Ukrainian vessels were seized belonged to Russia even before Moscow unilaterally annexed the Crimean peninsula from Ukraine in 2014.