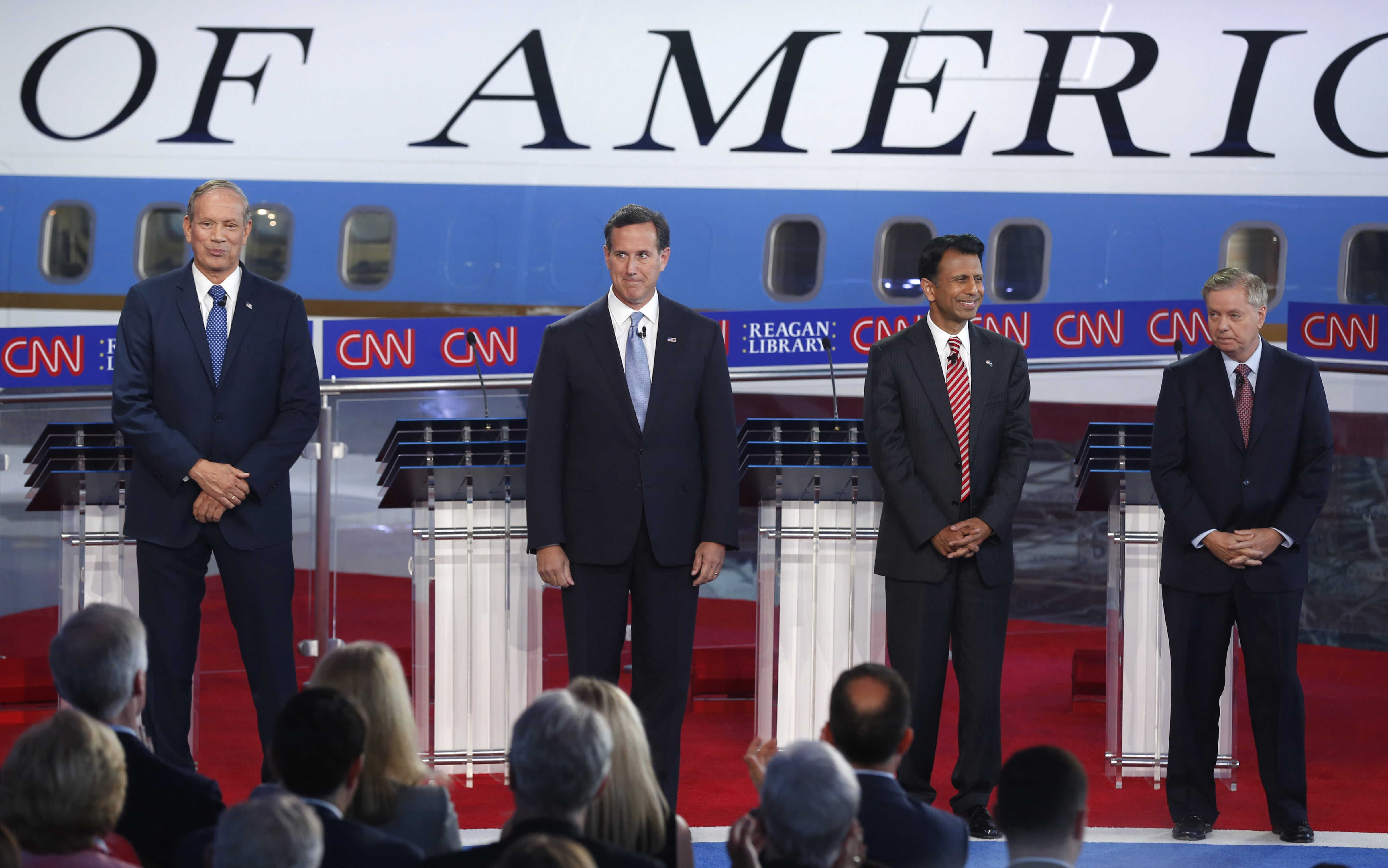 This story will be updated as the debate airs. Check back for more or visit CBSN for live analysis or read a transcript from that debate.

7:48 p.m. That's a wrap on the debate for the lower-polling candidates. The next portion of the debate with the top 11 starts at 8 p.m. EDT.

7:47 p.m. The last question for all four candidates was what they had to offer that the top-polling 11 candidates did not. Here's part of what they said:

Pataki: "First we have to win the election. You're going ot hear a lot of great ideas...none of it matters unless you win the election. And the second is once you win, you have to be able to govern successfully."

Santorum: "I am an outsider who came to Washington from the tough state of Pennsylvania and we got conservative things done. I made things happen in a town where things don't happen very much....it's time to get someone who's an outsider, who can go to Washington, D.C. and knows how to get things done."

Jindal: "I am tired of the surrender caucus. I am angrier at the Republicans in D.C. than the president...we need to send somebody who understands its time to make big changes."

Graham: "Number one I will win a war that we can't afford to lose. I have a plan to destroy radical Islam because it has to be. These are religious Nazis running wild. President Obama has made one mistake after another."

7:34 p.m. Jindal said, "Across the world dictators walk all over this president...the only group he's able to out-negotiate is the Senate Republicans." He then pointedly asked Graham whether he would be willing to do away with the filibuster to vote down the Iran nuclear deal.

"I don't want to take off the table the ability to slow down Obama in his last 13 or 14 months because I want 60 votes to stop what I think he's going to do between now and January 2017," Graham said. "The world really is the way it is, President Obama is president, the goal is to get him out of there and pick someone who would actually do something." He said he's not going to promise to do anything that isn't achievable.

As Jindal continued to criticize congressional Republicans for not fighting back, Graham said, "I'm tired of telling people things they want to hear that I know we can't do." He said he won't shut down the government to do something like defund Planned Parenthood.

7:26 p.m. Graham is asked whether he would support the idea of a military strike against Iran's nuclear facilities.

"If I believed they were trying to break out and get a bomb, absolutely," he said. He went on to talk about the need to rebuild the military and railed against the Iran nuclear deal.

7:20 p.m. Santorum gets emotional when talking about his support for raising the minimum wage.

"Republicans don't believe in a floor wage in America? Fine, you go ahead and make that case to the American public, I'm not going to. Not from a party that supported bailouts. I didn't, but this party did."

Graham had just weighed in on the issue, saying that if the minimum wage had gone up, it would have been hard for his parents to hire more people at the restaurant and bar they owned in South Carolina.

7:14 p.m. Pataki said he agrees with fellow candidates Donald Trump and Jeb Bush that hedge fund managers should not be able to pay a lower tax rate than their fellow Americans who earn a similar income.

Asked if he would support ending the rule on capital gains that allows them to pay lower taxes, Jindal said, "as a part of overall comprehensive tax reform that has a lower flatter tax code, sure. As as single item just to raise taxes, no."

Santorum said he was going to propose a 20 percent flat tax on income and capital gains for all Americans.

7:10 p.m. In a rare moment, Graham praised Democratic presidential candidate for doing a "good job" when it came to U.S. issues in Africa, and especially women's' issues. He then went on to attack her for the attack on the U.S. diplomatic facility in Benghazi.

7:07 p.m. A question for Graham and Santorum: Do they still support their votes to confirm Supreme Court Justice John Roberts, who was responsible for helping to uphold the Affordable Care Act in two separate decisions?

"He is one of the most qualified men to ever come before the United States Senate. I don't agree with his decision, but 99 percent of the time I will," Graham said. He said that one of the most important reasons for the Republicans to win the White House in 216 is so they don't "lose the judiciary" for decades.

Santorum said Roberts' decision on Obamacare was "bad," but, "he's made a lot of great decisions too...I don't regret at all standing up for John Roberts."

Jindal took issue with that, calling the Obamacare ruling "an expansion of socialism in our country. "It's not that he got a minor ruling wrong....the one that he got wrong is the big one," he said.

7:02 p.m. A lighter moment from Graham came when he was weighing in on the issue of religious liberty and the Constitution.

"I wasn't the best law student. By the end of this debate it'll be the most time I spent in any library," he said.

6:56 p.m. Jindal was the first candidate to get a question about Ahmed Mohamed, a 14-year-old Muslim boy who became a sensation on social media after word spread that he had been placed in handcuffs and suspended for coming to school with a homemade clock that teachers thought resembled a bomb says his suspension from school still stands. How would he strike the balance between security and discrimination?

"I think the American people, we don't discriminate against anybody based on the color of their skin," he said, before talking about how the U.S. is fighting radical Islamic terrorism. Pressed on the question again, he said, "I don't think a 14 year old should ever get arrested for bringing a clock to school." But, he said, "I'm glad that police are careful."

Then, he said, "The biggest discrimination going on is against Christian business owners and the conversation veered into the topic of Kim Davis, the Kentucky clerk who was jailed for refusing to issue same-sex marriage licenses.

"If she had worked for me I would have fired her," Pataki said.

He explained his position further, saying that he applauds people who stand up for their religious beliefs. But, he added, "When you are an elected official and you take an oath of office to uphold the law...you cannot pick and choose or you no longer have a society that depends on the rule of law."

6:49 p.m. Graham and Santorum do agree on one issue: The U.S. should put troops on the ground to fight the Islamic State of Iraq and Syria. Graham is calling for 20,000 troops. Santorum has proposed 10,000, but sounded open to a higher figure if that's necessary.

6:44 Graham and Santorum squabbled for several minutes over the issue of immigration after Graham said Santorum didn't have a plan to deal for the issue.

Santorum said he did have a plan in 2006 to beef up border security, but Graham said that it didn't deal with the 11 million immigrants estimated to be in the country illegally.

Then Graham said he couldn't get any Democratic support for his bill. "That went nowhere," he said.

"We need to win fighting for Americans," Santorum said.

"Hispanics are Americans," Graham shot back.

6:39 p.m. Pataki said that he doesn't believe that the U.S. will deport people who are here illegally, but he said that those who want legal status should be allowed to come forward, admit they broke the law, and perform 200 hours of community service.

6:38 p.m. Jindal is asked why his support for a pathway to citizenship is not amnesty.

"I've said secure the border...after that is done the American people that are here will deal with that pragmatically and compassionately," he said.

6:35 p.m. Asked why Jindal is wrong to support a pathway to citizenship, Santorum says the focus shouldn't be on people who are here illegally.

Jindal responded that his position is about supporting the borders first.

6:32 p.m. Conservative radio host Hugh Hewitt, who is one of the debate moderators, pushes Pataki on his statement that he wouldn't vote for Trump.

"Would you really vote for Hillary Clinton?" Hewitt asked.

Pataki insists that Trump will not be the GOP nominee.

"Donald Trump is unfit to be president of the United States or the Republican Party's nominee," he said.

6:28 p.m. Jindal is first of the gate to attack Trump - though he got a question inviting him to explain his recent attacks. "Let's stop treating Donald Trump like a Republican....he believes in Donald Trump," he said.

Santorum fired back, "I don't think it helps when Republicans attack Republicans personally."

But Jindal said that it's not enough to just attack Trump on policy because he "doesn't care about policy."

6:25 p.m. Some highlights from the opening statements:

Graham: "I'm the only candidate tonight who served in the military while Ronald Reagan was our president...I'm running for president to destroy radical Islam."

6:20 p.m. The four Republicans who are performing the worst in the polls have gathered for the first of two Republican debates that will air on CNN Wednesday.

Former Virginia Gov. Jim Gilmore, who participated in the Fox News /Facebook debate, did not reach the threshold for inclusion even in the second-tier debate. In order to qualify, candidates had to average one percent support in any three polls in the two-month window. Gilmore had one percent support in only one poll, CNN said.