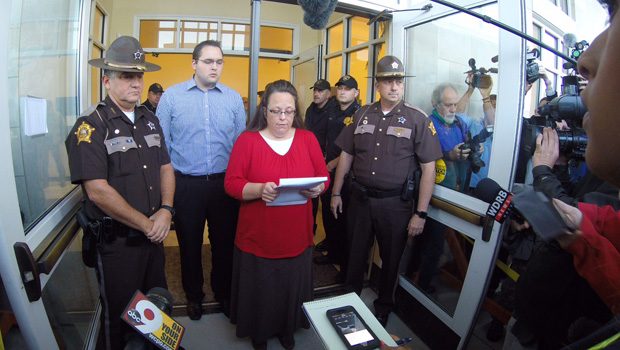 Kim Davis, the embattled county clerk who was jailed for refusing to issue marriage licenses in the wake of the Supreme Court's ruling on same-sex marriage, said Monday that she is being "forced to disobey her God" by allowing her office to issue licenses to gay couples.

Last week upon being released from detention, Davis was warned by U.S. District Judge David Bunning not to interfere with the issuing of marriage licenses, directly or indirectly, or face further time behind bars for contempt.

Speaking outside the Rowan County Courthouse as she returned to work this morning, Davis announced that any licenses issued by her office, with or without her name on the form, would be "unauthorized."

"I want the whole world to know ... If any [deputy clerk] feels that they must issue an unauthorized license to avoid being thrown in jail, I understand their tough choice, and I will take no action against them. However, any unauthorized license that they issue will not have my name, my title or my authority on it. Instead, the license will state that they are issued pursuant to a federal court order."

Davis continued to ask for an accommodation for her religious beliefs against having to issue licenses to same-sex couples.

She said that having her name on the marriage certificate, whether she signs it or not, "authorizes marriage that conflicts with God's definition of marriage as a union between one man and one woman [and] violates my deeply-held religious convictions and conscience. For me, this would be an act of disobedience to my God.

"Whether I personally issue the license or whether one of my deputies issues it, the result is the same. The license is issued under the authority of Kim Davis, County Clerk of Rowan County."

"I don't want to have this conflict. I don't want to be in the spotlight, and I certainly don't want to be a whipping post; I am no hero," Davis said. "I just want to serve my neighbors quietly without violating my conscience. And so this morning, I am forced to fashion a remedy that reconciles my conscience with Judge Bunning's orders. Effective immediately and until an accommodation is provided by those with the authority to provide it, any marriage license issued by my office will not be issued or authorized by me."

Davis became a hero to many conservative Christians when she stopped issuing the licenses after the Supreme Court effectively legalized same-sex marriage. Her profile reached a fever pitch when she was jailed, as protesters, presidential candidates and news crews from across the county descended on the small town of Morehead.

On Monday, the plaza outside the courthouse took on a carnival air: loud speakers blasted Christian music, television cameras and lights were set up in white-topped tents, and Davis' supporters waved signs and prayed.

The issue has drawn some of the most fervent Christian activists from across the country. Their trucks are parked up and down the street, bearing signs that read "sodomy ruins nations" and "repent."

One truck, with a North Carolina license plate, has a poster-sized photo of an aborted fetus on the side. Others, from Iowa and Colorado, feature photos of two men kissing with doomsday warnings about the "sin" of homosexuality.

Judge Bunning held Davis in contempt and ordered her to jail Sept. 3 when she continued to refuse to issue the licenses. In her absence, her deputies issued at least seven licenses to gay couples and altered the forms to exclude Davis' name.

The governor, the attorney general and the county attorney have said the licenses are valid. Davis and her attorneys claim otherwise.

The first couple to apply for a license Monday was Shannon Wampler and Carmen Collins. They stood at the counter for a half-hour, dozens of reporters gathering behind them and microphones bobbing above their heads.

Deputy clerk Brian Mason - sitting behind a sign that reads "marriage license deputy" - gave them a license despite his boss's objections and after a delay because of a printer problem. Protesters in the back heckled Mason, but he ignored them, initialed the license and shook the couple's hands.

He remained calm, scrolling on his computer and chewing gum, despite the surreal scene unfolding before him.

Wampler and Collins later told CBS News Correspondent Jericka Duncan they're not at all concerned about the validity of their marriage license.

"I think it's going to be valid from everything we've heard, except her attorneys, that it will be valid like any other license. I don't think she has control over that," Carmen Wampler-Collins said of Davis.

But lawyers with the American Civil Liberties Union say they do have concerns about the validity of the licenses. They said they were reviewing their legal options.

Davis went into her office after making her statement and remained there with the door closed and the blinds draw, despite the crush of media waiting at the counter.

"I love my deputy clerks and I hate that they have been caught in the middle of any of this," Davis said in her statement. "If any of them feel that they must issue an authorized license to avoid being thrown in jail, I understand their tough choice and I will take no action against them."

Matt Sparks, sheriff of this rural county, has found himself in the unexpected position of coordinating reporters from around the globe as they wait for a couple to arrive and try to get a license.

He asked the reporters to step back from the counter so a few customers could do business, like a man looking bewildered as he arrived to renew his car tag.

"I know what shot you're looking for," the sheriff told the crowd of media. "If a couple comes in you can step back up."