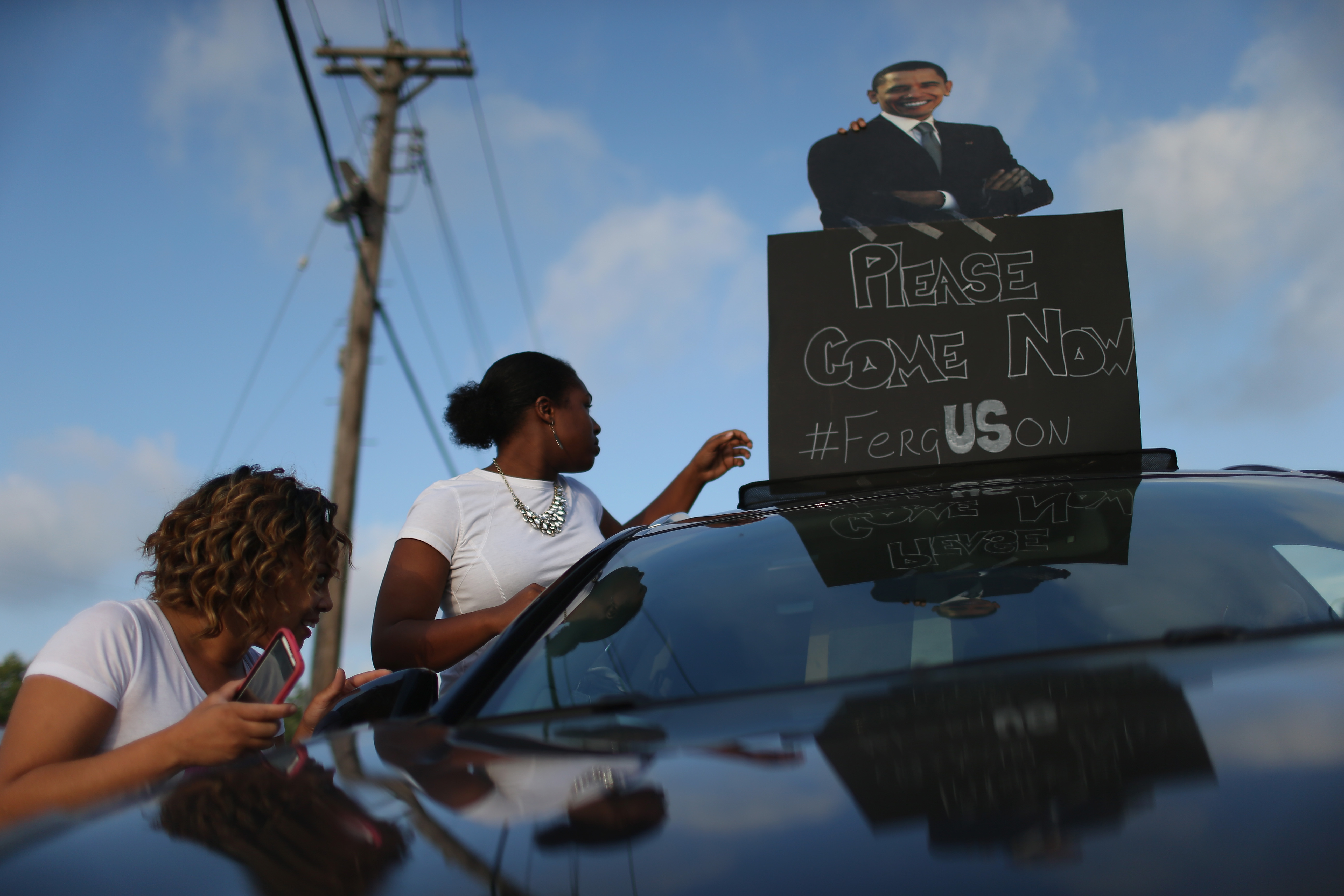 Amid ongoing tension in Ferguson, Missouri, President Obama announced on Monday that he's sending Attorney General Eric Holder there on Wednesday to work with community leaders through the issues dredged up by the shooting of unarmed 18-year-old Michael Brown.

Holder, Mr. Obama said, will meet with the Justice Department personnel and FBI agents conducting a federal criminal investigation into Brown's death. Holder will also meet with other community leaders whose "support is so critical to bringing about peace and calm in Ferguson," Mr. Obama said.

What Mr. Obama did not say on Monday was whether or not he will head to Ferguson himself, as protesters and pundits alike have called for. For now, after two days back at the White House, Mr. Obama returns Tuesday to Martha's Vineyard, where his family has been vacationing for more than a week.

Mr. Obama assured reporters that he remains "personally committed" to working on the problems spotlighted by Brown's death and the subsequent unrest in Ferguson, including racial inequities in the justice system and concern over militarized police forces. Broaching those issues, the president noted from the White House briefing room, is "a big project. It's one that we've been trying to carry out now for a couple of centuries."

It's certainly the case that Mr. Obama has been asked to address problems that will take time to solve, and a few extra days on Martha's Vineyard may not be that detrimental to those efforts. At the same time, some argue the president shouldn't underestimate the importance of symbolic imagery. Returning to the White House this week, or even traveling to Ferguson, could potentially move forward the nation's stuttering conversation about issues like race and justice. At the very least, it would eliminate the dissonant imagery of a president who's vacationing while Ferguson residents keep protesting.

"As far as substance goes, he's the president of the United States wherever he is... The president can be fully in command from any place on the planet," John Pitney, a politics professor at Claremont McKenna College, told CBS News. "The issue here is symbolism... He has to be alert to appearances. Perhaps coming back to the White House would be a prudent step."

Making symbolic gestures is about more than simply creating good optics, political experts say: it's about conveying one's priorities to the public.

"He will ultimately be judged on results, but as President Bush found after Katrina, sometimes the images can be hurtful," Pitney said, referring to President George W. Bush's much-maligned decision to fly over the hurricane damage in 2005 rather than stopping in the New Orleans area. "The iconic image of Bush looking out from Air Force One, that didn't look good."

By contrast, one of the rare instances in which Mr. Bush cut short a vacation at his ranch in Crawford, Texas, came in 2005 when he flew back to Washington, D.C. to sign a bill to restore Terri Schiavo's feeding tube.

Mr. Bush "had an issue he cared about, and it was part of a national conversation," American University professor Leonard Steinhorn, an expert on the presidency, told CBS News. "It was important to get people talking."

Deciding when to take that sort of symbolic step can be a tight wire to talk, Steinhorn said. Still, the events in Ferguson have clearly become a national issue.

"It's been a national issue for decades, the relationship between African-Americans and law enforcement, and it continues to be an issue, not just in Ferguson but everywhere in our country," Steinhorn said. "It would be helpful for him to broaden out the perspective and become a bit of an educator-in-chief to help us understand better the dynamics of what's going on."

In 2006, Mr. Obama said that presidents should sacrifice vacation time to focus on governing the nation.

"Essentially the bargain that any president, I think, strikes with the American people is: 'you give me this office and in turn my fears, doubts, insecurities, foibles, need for sleep, family life, vacations, leisure is gone. I am giving myself to you,'" he said in an interview with C-SPAN. "And the American people should have no patience for whatever is going through your head because you've got a job to do."

"This president knows better than most what happens in poor communities that have been antagonized historically by the hostile relationship between black people and the police department," Dyson said.

"It is not enough for him to come on national television and pretend there is a false moral equivalency between police people who are armed and black people who are vulnerable constantly to this. He needs to use his bully pulpit to step up and articulate this as a vision."

Even so, the White House seemed unconcerned about the symbolism of the president's whereabouts on Wednesday night. Mr. Obama, the first lady, and former Secretary of State Hillary Clinton were at a birthday party at a Martha's Vineyard golf club that evening. A little after 10 p.m. that night, the White House released a readout of the event that said, "The menu consisted of surf and turf and pasta. The Obamas danced nearly every song. A good time was had by all."

At the same time that evening, police decked out in combat gear were confronting protesters in Ferguson.

When asked on Monday whether he would travel to Ferguson, Mr. Obama responded thoughtfully but cautiously.

"Obviously, we've seen events in which there's a big gulf between community perceptions and law enforcement perceptions around the country," he said. "This is not something new. It's always tragic when it involves the death of someone so young. I have to be very careful about not prejudging these events before investigations are completed... I've got to make sure that I don't look like I'm putting my thumb on the scales one way or the other."

The president pointed to his "My Brother's Keeper" initiative as evidence of his long-term commitment to improving racial equity in the U.S.

Steinhorn said it's likely the president is taking a cautious approach to the Ferguson events because of the blowback he received for speaking plainly about other controversies involving race.

In 2009, Mr. Obama said that the Cambridge, Massachusetts police acted "stupidly" when they arrested Harvard professor Henry Louis Gates, Jr., who is African-American, in his own home. The president used the incident to talk about the history of racial discrimination by law enforcement in the U.S.

The story of Mr. Obama's remarks exploded, and to tamp down the polarized nature of the national discussion, the president proposed a "beer summit" at the White House with Gates and the officer who arrested him, Cambridge police sergeant James Crowley.

"There's a lot that [Obama] could do, but I think he may have been somewhat burned by the reaction to the Gates incident," Steinhorn said. "But he should be unbowed, because this is an incident that's not just located in Ferguson, Missouri -- it's located in American conscience and American history.

"Until we get the leadership to come to terms with it, this poor young man, or Trayvon Martin, or countless before them, will be victims of our inability to do so."