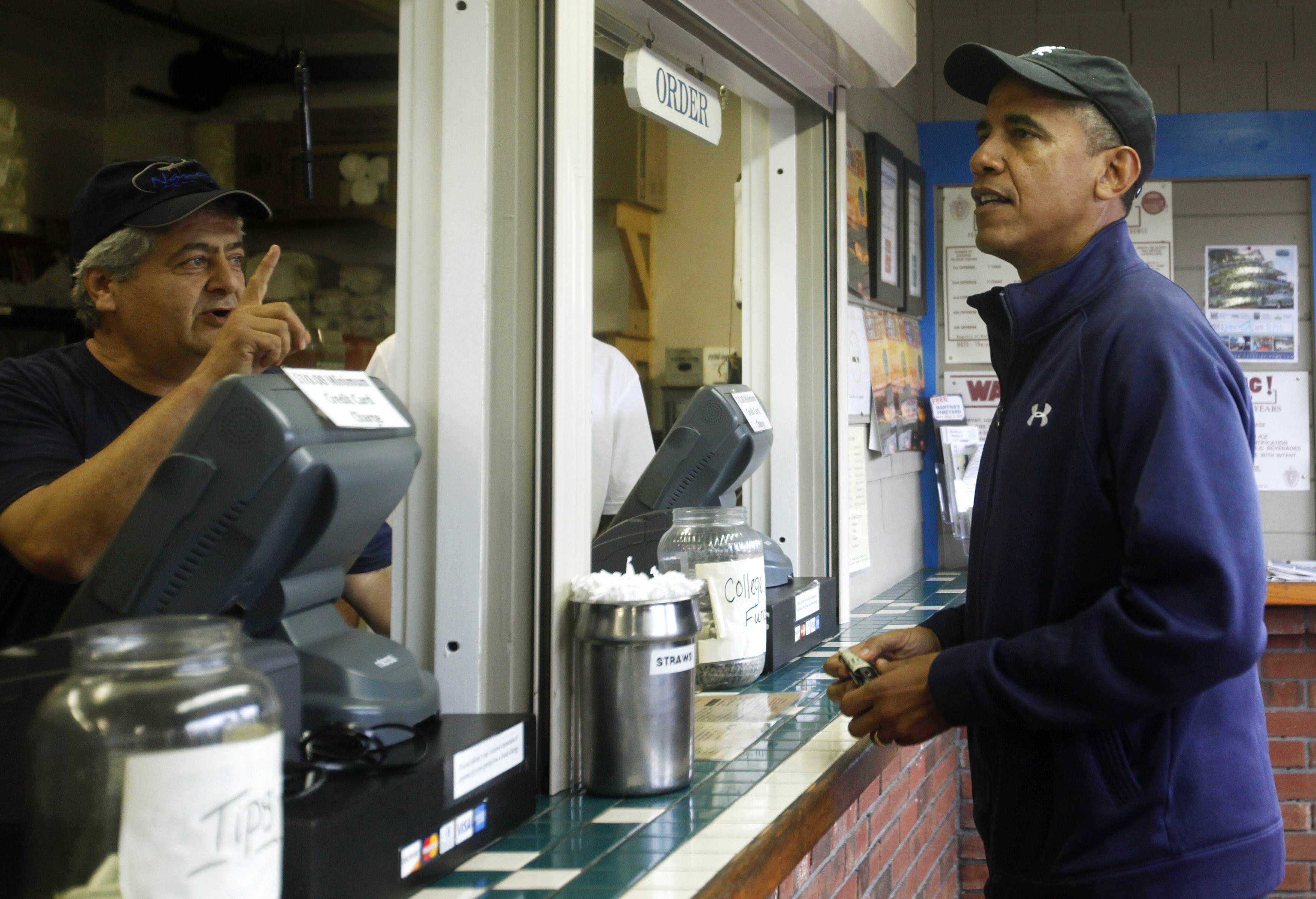 For many Americans, a vacation means a chance to ignore their work email and get out of the house for a while. For presidents, it's a change in locale - but never the ability to tune out the world.

That will be the case for President Obama when he departs for Martha's Vineyard on an annual summer vacation Saturday. In addition to his wife and two daughters, Mr. Obama will have a virtual mini-White House of aides, advisers and briefings in tow.

According to CBS News White House Correspondent Mark Knoller, who keeps detailed records of presidential activities, Mr. Obama has left the White House for vacations of anywhere from two to 15 days 19 times since he took office in 2009 - a total of 125 partial or complete days. His predecessor, former President George W. Bush, had spent 381 partial or complete days at his ranch in Crawford, Texas, over the course of 58 trips, and another 26 days at the Bush family compound in Kennebunkport, Maine, over seven trips.

That time, he stayed in Hawaii. In December 2012, that wasn't possible: with congressional negotiators at an impasse over the so-called fiscal cliff - a combination of automatic budget cuts and tax increases that would have taken effect January 1, 2013 - Mr. Obama flew home to Washington to push members of Congress toward an agreement.

"These are judgment calls, and some of those judgment calls have to involve optics," American University professor Leonard Steinhorn, an expert on the presidency, told CBS News. "One can still be fully staffed wherever a president is - that obviously goes without saying. But then where does it become important to be there physically?...When does it become reassuring as the leader of our nation, not just the head of state, to be there, to show sort of the moral and political leadership that we look for coming from Washington?"

Leonard said physical presence in the White House tends to be most important when a president is handling matters of national security or grave crises. A pattern of previous presidential vacation interruptions shows that is often the case.

In 1983, then-President Reagan cut short a visit to his California ranch after the Soviet Union shot down Korean Airlines Flight 007 amid the backdrop of the Cold War. In 1998, President Clinton came back to the White House for a night to order missile strikes on suspected terror bases in Afghanistan and Sudan after the bombings of the U.S. embassies in Kenya and Tanzania.

Bush, on the other hand, opted to remain at his ranch in Texas and then go ahead with a previously scheduled trip to Arizona and California on behalf of his Medicare Prescription Drug Program after Hurricane Katrina made landfall in New Orleans on August 29, 2005. He received extensive criticism for observing the damage from his plane two days later - eternalized in photos taken aboard Air Force One - and would later call the decision "a huge mistake."

But he didn't always stay out of D.C. In March 2005, supporters praised Bush for interrupting a Texas vacation and flying to Washington in order to sign a bill to restore a feeding tube for Terry Schiavo, the severely brain-damaged Florida woman who became the center of a national controversy.

"From his perspective, that was an issue of deep moral concern, whether you agree with it or not, and he felt it was important to be there," Steinhorn said. "A lot of it depends on how the presidents and their staff and inner circle determine whether it is the right message to send by coming back to Washington."

For Mr. Obama, that choice will likely be made by which foreign crises erupt - or do not - while he is away. As he prepares to depart, the U.S. has conducted humanitarian air drops in Iraq with the possibility of airstrikes on the horizon, the threat of a Russian invasion in eastern Ukraine continued to grow, and Israel and Hamas were still far from a permanent agreement on a truce to end the war in Gaza.

"If it involves something which could engage American troops or military, lets say American planes do go into Iraq, ok, and start bombing , it would probably be in the president's interest to be in the White House while that is happening, or at least during the initial stages to make sure things are going well," Steinhorn said.

Mr. Obama may have preempted the talk that he is too absent from Washington by planning to return to the White House on Aug. 17 for two days. White House Press Secretary Josh Earnest said he wanted to "do a day or two of in-person meetings here at the White House," though declined to say who would be in the meetings or what topics they would cover.

"This is not in relation to an emerging situation. It's obvious, because these meetings are being scheduled a couple weeks in advance," Earnest said.

He insisted it was not because of a belief that a two-week vacation didn't reflect well on Mr. Obama.

"The president recognizes that he is president of the United States 24 hours a day, seven days a week, wherever he happens to be," Earnest said. "And the president will be in a position to fulfill the core functions of the commander-in-chief and ensure for the safety and security of the American people wherever he travels. That will be true when he travels at the end of this week. That will be true for the entirety of his time that he is in he's in Massachusetts."