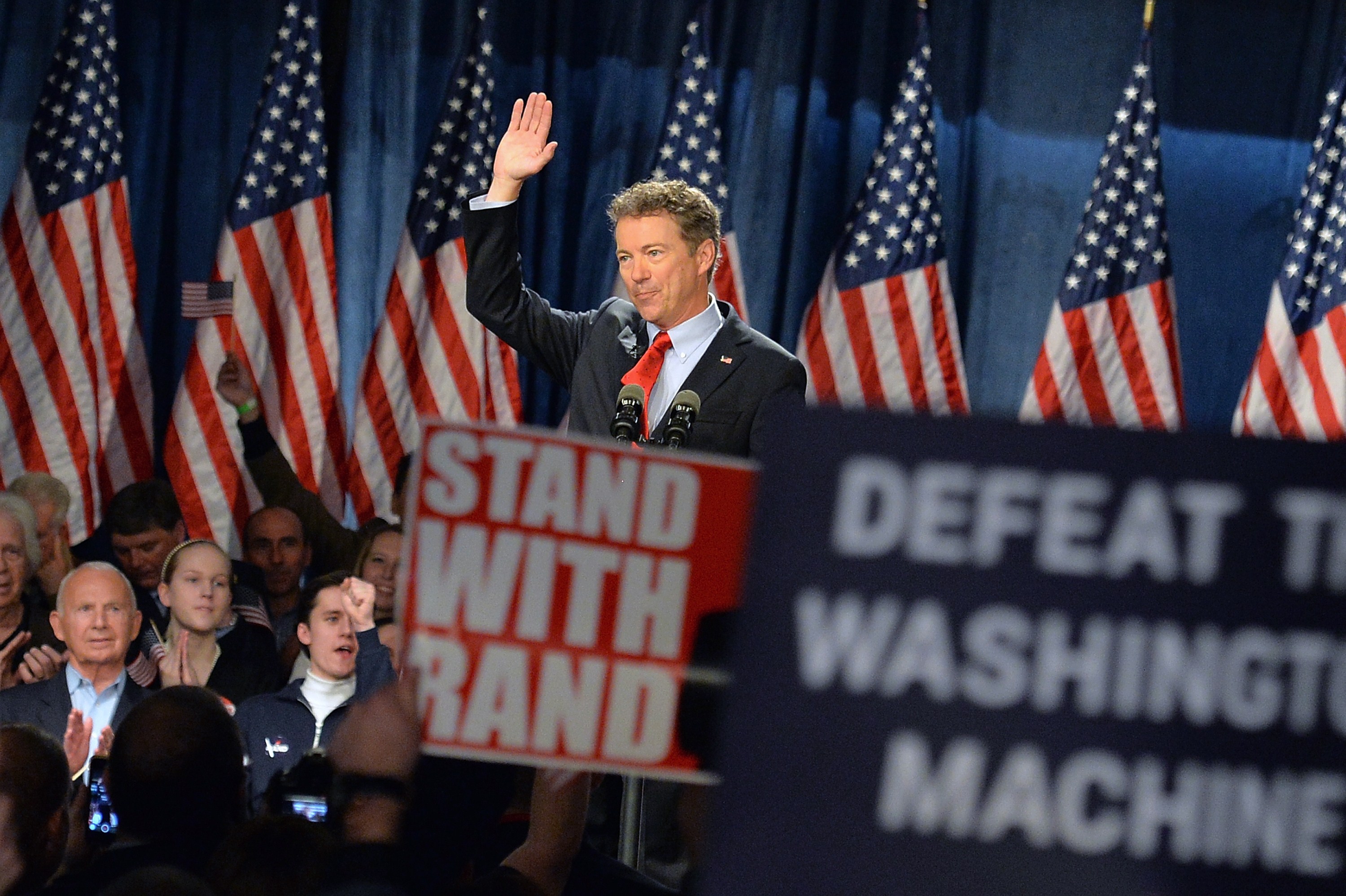 LOUISVILLE, Kentucky -- Sen. Rand Paul, R-Kentucky, made his presidential bid official Tuesday afternoon, laying out his vision to restore liberty and freedom to Americans. He's building his candidacy on a strong national defense, a flat tax, school choice, an end to government surveillance, and the "defeat" of the "Washington machine," and over the next few months he'll have the opportunity to see how receptive voters are to his plans for the country.

Paul's fight against big government has been a central theme ever since he ran a successful campaign for the Senate here five years ago. And although many dismissed Paul as a long shot candidate, his message proved to be well-suited to the moment.

"It was a time when people were somewhat beginning to feel that the Obama administration was overreaching," recalled Dr. Dewey Clayton, a professor of political science at the University of Louisville who has watched Paul's career rise. "They were seeing government taking a larger role in their lives."

In fact, voter sentiment against the Obama administration was felt nationwide: 2010 was a year which saw Republicans gain six seats in the Senate, winning four open seats and beating two Democratic incumbents. Although Democrats held onto control of the Senate, Republicans won more senate races than they had at any time since 1994. But 2010 was also a year that saw the rise of the Tea Party movement.

It was clear that a Republican would take over the Kentucky seat vacated by Sen. Jim Bunning, who retired when he saw support for his reelection wane among those in his party's leadership. The party liked Kentucky Secretary of State Trey Grayson for the job - GOP Leader Mitch McConnell endorsed Grayson two weeks before the primary. But Paul beat his opponent by more than 20 points. He won the general election as an outsider with just shy of 56 percent of the vote.

Dr. Brian Strow, who served as one of Paul's economic advisors during his Senate bid, sees a similar opening now for a non-establishment candidate on the national stage.

"If people are tired of a dynasty, this guy is the polar opposite," he said. "He's not the career politician."

Much of Paul's adult life revolved around politics, although not his own career. Paul, still a practicing opthamologist, owes years of his political experience to his father, former Texas congressman and two-time presidential hopeful Ron Paul. The younger Paul appeared alongside the elder Paul at campaign stops in 2007 and 2008, and at times went solo as his surrogate, giving the impression that Paul has always been comfortable on the national stage.

Strow said that Paul used the name recognition and his father's fundraising apparatus to his advantage years ago, but he has since made his own name in politics. The Paul family connection, Strow said, is far from the "long family history in politics" that characterizes the Bushes, and to some extent, the Clintons.

"Most people just knew him as the eye doctor," he said. "I miss him as my eye doctor."

Paul has made a concerted effort recently to distance himself from his father's libertarian point of view, amid speculation that it could ultimately turn off his core group of supporters and loyal staffers. Ron Paul, quickly noticed and warmly welcomed by the crowd awaiting the start of Tuesday's event, took in his son's announcement from a prime seat on a riser.

"I never could have done any of this without the help of my parents who are here today," Paul said at the beginning of his speech. He acknowledged that their support helped him "finally become an eye surgeon," but made no mention his father's career in politics.

The two have been diverging on foreign policy. Paul has fought the "isolationist" label associated with Libertarians like his father, moving more toward the hawkishness of establishment Republicans. Paul proposed a $190 billion increase to the defense budget paid for with other spending cuts, and on Tuesday, he espoused the need for a strong defense against ISIS, whom he described as "haters of mankind."

"Senator Paul would like to tap into his dad's former political support," said Strow, who is an economics professor at Western Kentucky University in Bowling Green, Ky., where Paul lives, "but by not taking everything his dad campaigned on hook, line and sinker, I think it helps assure people that Rand is his own man."

A major difference between Paul's Senate campaign and his now-official presidential campaign -- as well as his father's presidential bids -- is his effort to broaden the reach of the Republican party. Paul has courted the youth vote and especially the minority vote, through speeches at historically black colleges and his involvement in civil rights issues like voter ID requirements, drug sentencing laws and increasing police militarization. One of the videos shown before his speech Tuesday showed Paul in a meeting with minority parents discussing education.

"I want all our children to have the same opportunities that I had," he said. "We need to stop limiting kids in poor neighborhoods to failing public schools and offer school choice, not just for the privileged, but for everyone."

Paul's minority outreach may also help separate him from his fellow Republican candidates, but Clayton thinks he will have to be strategic in the early stages of his campaign.

"He's got a fine line to walk," he said. "If his minority outreach is too great, he runs the risk of alienating some of the true social conservatives."

Those conservatives are largely in the early voting states of Iowa and New Hampshire, and they're very influential in the election. Paul will next appear Wednesday at a rally in Milford, N.H., where he is expected to continue beating the drum for a less intrusive government. It's a popular sentiment in the state where license plates bear the motto "live free or die."