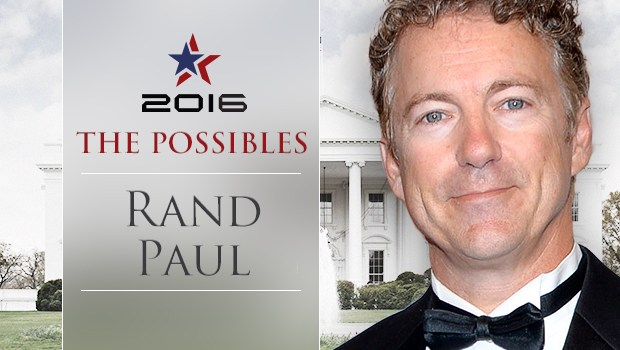 In 2012, Texas Republican Rep. Ron Paul was a force to be reckoned with in the presidential race. His group of supporters - including many young voters - was limited, but passionate. Though he wasn't considered a serious contender for the Republican nomination, he had a strong showing in both the Iowa caucus and New Hampshire primary, finishing third in Iowa with 21.5 percent of the vote and second in New Hampshire with 22.9 percent.

Now his son, Texas Sen. Rand Paul, is contemplating his own presidential bid. Both men come from the libertarian wing of the party, though Doug Wead, who has worked for both Pauls, calls the elder Paul a "classic libertarian" and the younger one a "practical libertarian."

And while Ron Paul was generally viewed as someone who ran for president to prove a point, his son could be a serious contender for the nomination. What he has to do is navigate the tricky dance of keeping his father's supporters engaged and on his side while attracting a whole other group of voters who might not have given Ron Paul a chance.

"His dad's base is not going to be enough,so he's got to find ways to expand the base and become, if not the favorite of different factions of the party, at least acceptable," University of New Hampshire Political Science Professor Dante Scala told CBS News. "He has to do that in such a way that doesn't make his father's base voters feel as if they're being betrayed or that Ron Paul's legacy is being compromised."

Politics isn't the first arena where Paul has followed in his father's footsteps. Like Ron Paul, who had a medical career that preceded his first run for office, Rand Paul also started out in the field of medicine. He was always active in politics, serving in the Young Conservatives of Texas club during college at Baylor University. He left for Duke University to attend medical school before completing his undergraduate degree, and he opened an ophthalmology practice in Bowling Green, Kentucky, after he completed his residency.

All the while, though, Paul was helping his father with his congressional campaign and 2008 presidential bid, and he started a group called the Kentucky Taxpayers Union in his home state. His rise coincided with the rise of the tea party in 2009, and in 2010 he defeated Kentucky Secretary of State Trey Grayson, the establishment pick for Kentucky's vacant Senate seat, to become a senator.

His time in the Senate has been largely defined by work on civil liberties issues. In 2011, he tried to block an extension of the PATRIOT Act, which was ultimately unsuccessful, and his national prominence spiked in March 2013 after he spent nearly 13 hours filibustering the confirmation of President Obama's nominee to lead to CIA over the issue of unmanned drones being used to kill terrorism suspects who are U.S. citizens.

He has also been a stickler on spending issues, opposing budget deals that ultimately prevented government shutdowns because they did not cut enough from the budget, and has voted against raising the debt ceiling because Congress was not balancing its budget.

Paul has also rankled his fellow Republicans at times, both because he is far less hawkish on national security issues, and he has pushed the GOP to do more minority outreach. He once said, "The Republican Party brand sucks, and so people don't want to be a Republican, and for 80 years, African-Americans have had nothing to do with Republicans," and said a failure to reach out to black voters was the GOP's "biggest mistake" of the last several decades. He has advocated for issues close to the black community, like expanding voting rights and reforming drug sentencing laws.

Immigration: Paul falls more to the left on the spectrum on immigration issues than many of his Republican colleagues. In 2013, during the heart of the Senate immigration debate, Paul delivered a speech in which he backed the idea of allowing immigrants in the U.S. illegally to become citizens. He favors an expansion of legal immigration and work permit program. But he ultimately voted against the Senate's bipartisan immigration bill, saying the plan failed to secure the border as its first item of business.

Economy: Ron Paul was famous for his call to "End the Fed," the title of his 2009 book. Rand Paul doesn't go that far, but has repeatedly introduced bills that would allow Congress to audit the Federal Reserve. He was also among the many politicians in the formative years of the tea party movement to raise alarm about the amount of debt the U.S. carries. He has advocated for cutting spending across the board and adopting a requirement that the federal government balance its budget.

Criminal justice system: The list of issues that attract bipartisan support is dwindling, but one area where Paul has found friends across the aisle is on issue of reforms to sentencing laws and the criminal justice system. He has worked on legislation to eliminate mandatory minimum sentences and bring disparate drug laws into line. He has also sought to change the laws in order to make the transition out of prison life easier by pushing for bills that would help people expunge their criminal records and allow convicted felons to vote. "Anyone who thinks race does not still, even if inadvertently, skew the application of criminal justice is just not paying close attention," Paul said at a speech to the National Urban League last year.

Foreign policy: This is one of the areas where Paul finds himself most at odds with his own party, especially the traditional hawks who are much quicker to propose military intervention. He frequently invokes former President Ronald Reagan's words, calling himself a believer in the "peace through strength" philosophy. Compared to some of his peers, he favors a more limited authorization for the use of military force in the fight against the Islamic State of Iraq and Syria (ISIS) - although he believes Congress should always give authorization for war. He has taken heat from fellow Sen. Marco Rubio, R-Florida, for backing President Obama's plan to restore diplomatic relations with Cuba. He has also been a proponent of ending foreign aid to other countries, which has led to criticism that he wants to end aid for Israel, a U.S. ally that receives about $3 billion a year from the U.S.

Civil liberties: Paul's libertarian beliefs are especially strong when it comes to civil liberties issues. He opposed the PATRIOT Act extension because it continued to authorize roving wiretaps and government searches of business records, and the filibuster was part of a larger concern over the use of drones to target Americans who have not been formally charged with a crime. He also joined a conservative group and Virginia's former attorney general to sue the president and other top administration officials over National Security Agency surveillance of Americans' phone records.

"He wants to do better than his father did. He actually wants to be the nominee and a lot of times his father seemed like more of a message candidate than a contender," Scala said of Paul.

There's an advantage to having a built-in base of support in Iowa and New Hampshire, giving Paul a source of volunteers and grassroots fundraising that exceeds most of his rivals. But to ensure that base works as hard for him as it did for his father, Paul will necessarily have ensure he doesn't stray too far. Stay too close to the base, and he risks not attracting enough support to win the nomination.

Foreign policy seems to present the biggest challenge, where Paul is straying both away from his father and the mainstream of the GOP.

Wead said foreign policy is the area in which Paul differs the most from his father.

"Both men believe that the nation should not go to war without congressional approval. In that sense, they both believe it is a mistake to abandon the U.S. Constitution and forfeit the war making powers to the president alone. And both men believe that the United States should not assume the role of policeman of the world. But the difference is in degrees. And it is huge," he said.

Ron Paul, Wead said, "would prefer that American stay out of everybody else's business. For example, he does not see Iran as a threat to American security." Rand Paul would agree "in an ideal world" but sees the possibility of Iran building a nuclear weapon as a genuine danger to the U.S.

Wead also pointed to Rand Paul's support for declaring war against ISIS, and said he sees the foreign aid issue in less stark terms than his father. He would focus on ending aid to countries that persecute Christians or money that gets funneled to terror groups that target Americans and Jews, rather than stopping all aid immediately. He also professes to support Israel, whereas his father was vocally critical of the U.S.'s support for the Middle Eastern nation.

But as different as Paul is from his father on the foreign policy issue, it won't be enough for many Republicans.

Republicans "appear to be over their Bush fatigue when it comes to foreign policy and involvement overseas and that's arguably been true since last fall with ISIS," Scala said. "The appetite for sending ground troops abroad may not be what it was 10 years ago but still it appears as if Republican voters are in a hawkish mood, and that leaves Rand Paul on the outside looking in."

"His biggest problem in the party is whether in fact he surrenders what Republicans for 50 years have considered their trump card, and that's the strong interventionist foreign policy stance," Dennis Goldford, a political scientist at Drake University in Iowa, told CBS News. "And a lot of what attracted people to Ron Paul was the idea that we've sacrificed enough for the rest of an ungrateful world and let them all deal with their problems."

In Iowa, the challenge will be moving from beyond the libertarian base of the party to also attract some of the state's powerful social and religious conservatives. There will be fierce competition in that space if people like former Pennsylvania Sen. Rick Santorum, former Texas Gov. Rick Perry, Wisconsin Gov. Scott Walker and former Arkansas Gov. Mike Huckabee decide to enter the race.

Plus, Goldford said, Iowa voters are looking for a candidate who is able to display more visceral, in-your-face emotion than Paul does when he's campaigning.

'What these folks want is somebody who will channel their rage and anger about the Obama administration, about the condition of the country, and about the future, and so they would respond enthusiastically to people who attempted to channel that set of emotions," he said. "They're less inclined to respond enthusiastically to someone who sounds more soft-spoken and at times Rand Paul does."

Of course, style can be both a positive and a negative, Wead noted when he was comparing father and son.

"The father is a great provocateur. Which explains his following. He would say something outrageous which would drive his audience to Google and when they came away with the answers they had the pride of authorship and the pride of discovery. It made them devoted," Wead said. "But the father's provocations also made enemies. The son is a superb politician. He is a natural pleaser."