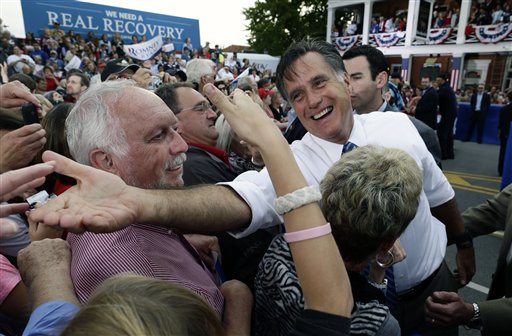 Mitt Romney is leading President Obama by five percentage points in critical battleground states, according to a USA Today/Gallup poll out Monday - a gain the survey suggests is linked to a spike in support among women.

Women typically trend Democratic: In 2008, female voters chose Mr. Obama over Republican Sen. John McCain by a 13 point margin. Now, according to USA Today/Gallup, Romney is tied with the president among women who are likely voters, 48 percent to 48 percent. He is leading by 12 points among men.

"In every poll, we've seen a major surge among women in favorability for Romney" since since the first presidential debate, veteran Democratic pollster Celinda Lake tld USA Today. "Women went into the debate actively disliking Romney, and they came out thinking he might understand their lives and might be able to get something done for them."

But the Romney camp shouldn't celebrate yet, argued Obama pollster Joel Benenson: "In the last election, Gallup's 'registered voter' model -- not its 'likely voter' model -- was a much more accurate predictor, with their likely model missing the mark in 2010 by 9 points right before the election," he argued in a memo to reporters. "That explains why Gallup's results are way out of line with a dozen recent swing state polls that show the president with a double-digit lead among women."

Among registered voters (not just likely voters) in the swing states, the president leads by nine points among women and two points overall, 49 percent to 47 percent.