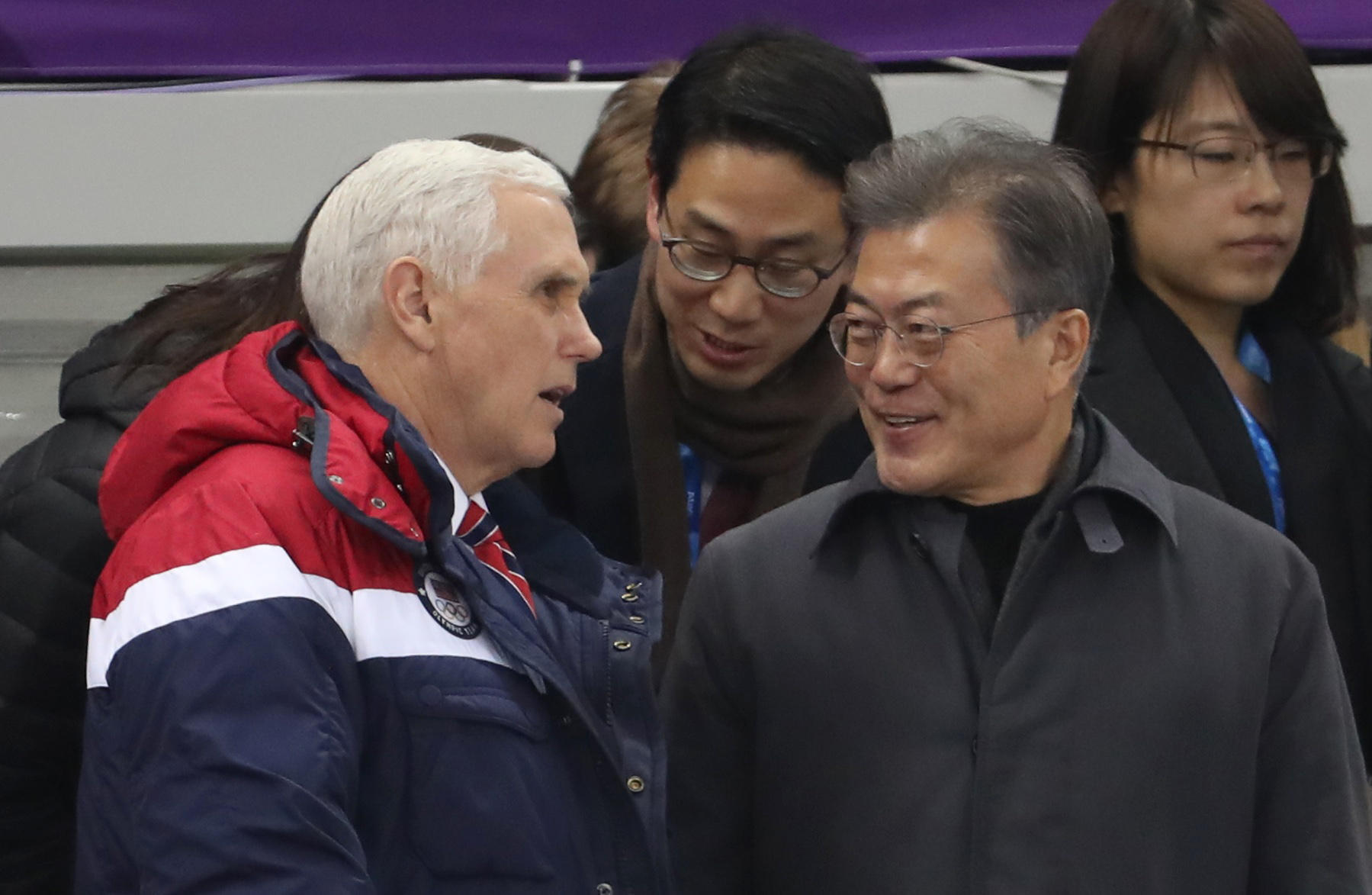 The two were seated not far from a section of North Korean cheerleaders who attended the Olympics in a sign of warming ties between the two Koreas that Pence and other U.S. officials have warned against.

"Working in unity on the way to unification," Kim Yong Nam wrote. "Putting in real effort is our people's wish."

"The distance Between Pyongyang and Seoul has become closer in our hearts," Kim Yo Jong wrote. "And I wish for a future of unification and prosperity."

The lunch Saturday at Seoul's presidential mansion between Moon and Kim Yo Jong was the most significant diplomatic encounter between the rivals in years. The night before, Kim Yo Jong and other North Korean delegates attended the opening ceremony of the Pyeongchang Winter Olympics, watching a "unified" Korean team march under a banner showing an undivided Korean Peninsula.

Nothing has been settled on any trip north by Moon. But the verbal message to come at a "convenient time" from dictator Kim Jong Un is part of a sudden rush of improving feelings between the rivals during the Pyeongchang Olympics. The result: a heady, sometimes surreal, state of affairs in a South Korea that has seen far more threat than charm out of the North.

Still, it wouldn't be South Korea if people weren't asking the perennial question when it comes to North Korea changing gears and showering its rival with apparent affection: What's in it for Pyongyang?

Past "charm offensives" have been interpreted as North Korea trying to recoup from crippling sanctions on their nuclear program, or trying to drive a wedge between Seoul and its U.S. ally.

A massive military parade in Pyongyang on the eve of the just-opened Pyeongchang Games has been used as Exhibit A by skeptics. In it, Kim Jong Un highlighted several huge intercontinental ballistic missiles, which were successfully flight tested three times last year and could reach deep into the U.S. mainland when perfected.

Even so, there's also cautious optimism, or curiosity at least. If peace isn't imminent, a summit in Pyongyang between Moon and Kim Jong Un seems preferable to recent months' threats.

Moon is eager to use Kim's presence at the games to restore regular communication with North Korea and eventually pull it into nuclear talks. Many in Seoul, however, while interested in the warming high-level contacts, are also tempering expectations for a real breakthrough.

There's worry, too, that the proposed summit may come with preconditions -- a North Korean specialty. A big one could be a demand to cease the U.S.-South Korean war games that North Korea claims are preparation for invasion.

But Moon, a liberal who has always wanted to engage the North, will also have to convince a good portion of his own people who are deeply wary about North Korean intentions. Throw in there the accusations that South Korea has had to arrange huge payouts for past meetings, and that these earlier encounters, while producing indelible images, have done little to slow North Korea's pursuit of nuclear weapons.

Even if there are more meetings between the rivals after the Games, accomplishing something is another matter. South Korea wants a northern neighbor without nukes; North Korea vows to keep its weapons until the United States discards its "hostile" policies against the country.

Hours before Friday's opening ceremony in Pyeongchang, Japan's Abe warned Moon not to fall for North Korea's "smile diplomacy" during the Olympics, according to Moon's office. Pence carried a similar message.

They seem to have gone unheeded.

"Kim Jong Un is clearly serious about reviving talks with the South to improve relations," said Koh Yu-hwan, a North Korean expert at Seoul's Dongguk University and a security adviser to Moon.

"It seems clear," he said, "that the countries have entered a phase of restoring a regular level of contact."

Pence's office, meanwhile, didn't directly address Kim's invitation to Moon. "The vice president is grateful that President Moon reaffirmed his strong commitment to the global maximum pressure campaign and for his support for continued sanctions," Pence spokeswoman Alyssa Farah said when asked about the developments.

Pence had only one event on his schedule on Saturday. Moon and Pence watched short-track speedskating together, and exchanged pleasantries and a hug. Moon also greeted Fred Warmbier, who was seated behind him, Alemany reports. He is the father of Otto Warmbier, who was arrested in North Korea and died last year after returning to the U.S.

In a tweet Saturday, Pence said, "The U.S will not allow the propaganda charade by the North Korean regime to go unchallenged on the world stage. The world can NOT turn a blind eye to the oppression & threats of the Kim regime."