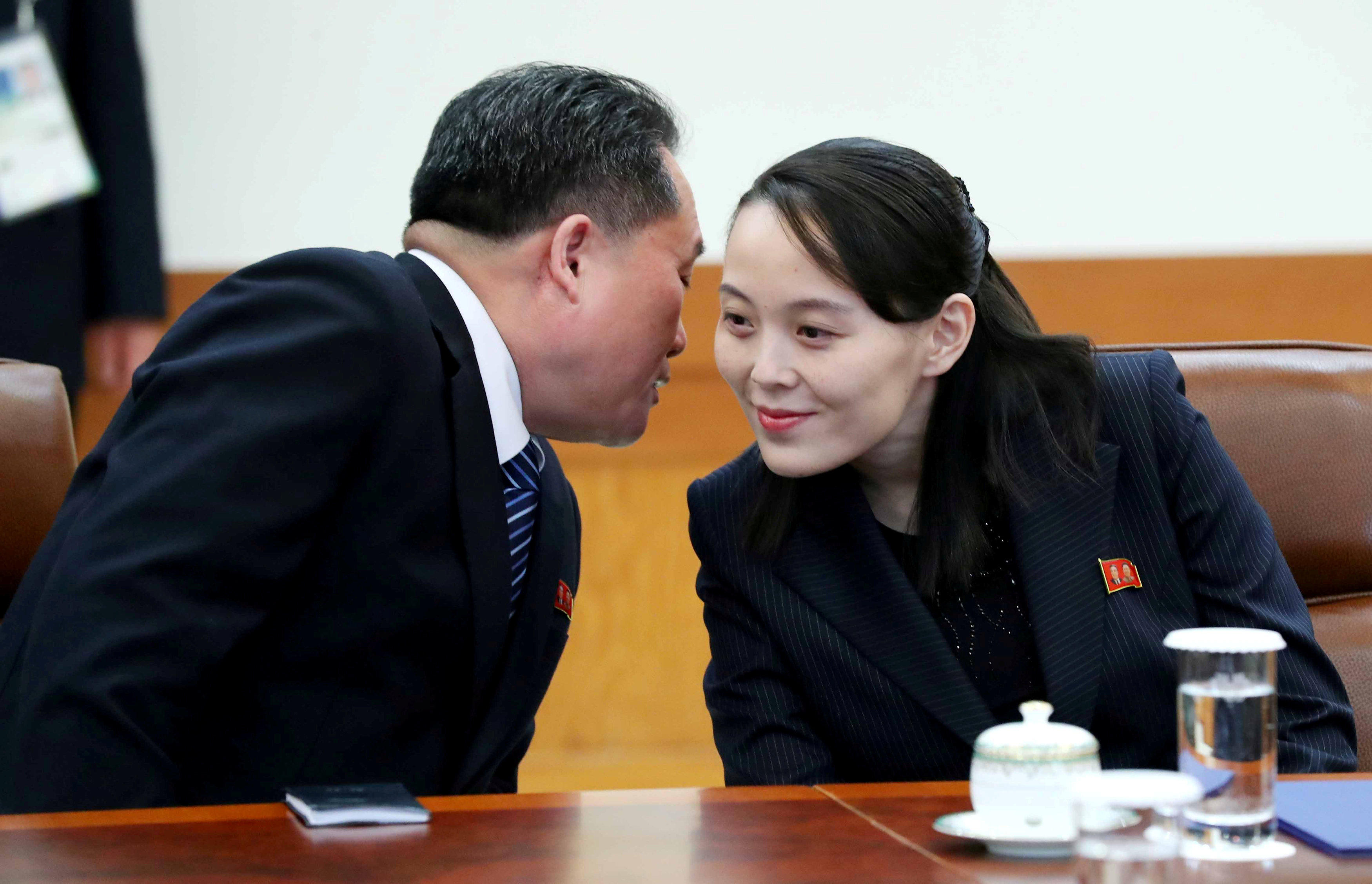 SEOUL, South Korea -- South Korean President Moon Jae-in on Saturday met with senior North Korean officials including leader Kim Jong Un's sister over lunch at Seoul's presidential palace in the most significant diplomatic encounter between the rivals in years. The luncheon at the Blue House came after Kim Yo Jong and other North Korean delegates attended the opening ceremony of the Pyeongchang Winter Olympics, which has brought a temporary lull in tensions over the North's nuclear program.

At the Olympic Stadium's VIP box, Kim Yo Jong and North Korea's nominal head of state, Kim Yong Nam, took their place among dignitaries from around the world, including U.S. Vice President Mike Pence who sat just a few feet (less than a meter) away and seemed to make an effort not to acknowledge them.

"You went through a lot of trouble braving the cold until late," he told them.

After sitting at the table, Kim Yo Jong pulled out what appeared to be a blue document folder in front of her, which sparked the interest of the local media that speculated she might be carrying a personal message from her brother.

Moon is desperate to use the games as an opportunity to restore regular communication with North Korea and eventually pull it into talks over resolving the international standoff over its nuclear program.

It's still unclear whether Saturday's event could be used to set up bigger meetings between the Koreas. Lawmakers from Moon's liberal ruling party have talked about the possibility of South Korea sending a special envoy to Pyongyang to meet with Kim Jong Un. There's even speculation of a summit between Kim and Moon.

Moon has already put a summit offer on the table. The first liberal president in a decade, Moon during his inauguration speech last year that he would be willing to visit Pyongyang and meet with Kim Jong Un if that helps solve the nuclear problem.

The North and South held summits in Pyongyang in 2000 and 2007, both hosted by late Kim Jong Il, the father of Kim Jong Un.

Kim Yo Jong, 30, is the first member of North Korea's ruling family to visit the South since the end of the 1950-53 Korean War.

CBS News correspondent Ben Tracy says her influence in the regime is so significant, South Korean media call her the North's Ivanka Trump. Her presence is the latest move in an extraordinary show of Olympic diplomacy with Seoul that could prove to be a major challenge to the Trump administration's hard-line Korea policies.

And as Tracy reported earlier this week, the first member of North Korea's ruling family to cross the border, Kim Yo Jong was never guaranteed a warm welcome from all South Koreans.

As First Vice Director of the Central Committee of North Korea's ruling Workers' Party, Kim has been an increasingly prominent figure in North Korea's leadership and is considered one of the few people who has earned her brother's absolute trust.

However, no member of North Korea's ruling family has ever before visited the Blue House, which is near where North Korea founder Kim Il Sung - Kim Yo Jong's grandfather - sent dozens of commandos to assassinate former South Korean military strongman Park Chung-hee in 1968. They were stopped and most were killed near the palace, which was newly rebuilt in 1991.

Moon and Kim Yo Jong broke out broad smiles as they shook hands ahead before the start of the opening ceremony at Pyeongchang's Olympic Stadium. Moon had earlier met Kim Yong Nam during a dinner he hosted for visiting dignitaries.

Moon and the two North Korean delegates cheerfully clapped and waved as the athletes from the two Koreas jointly marched during the ceremony holding a blue-and-white flag symbolizing a unified Korean Peninsula. Pence and Japanese Prime Minister Shinzo Abe sat nearby, looking expressionless.

Critics say it's unclear whether revived dialogue between the Koreas could lead to immediate breakthrough on the nuclear stalemate when it seems unlikely that the North would be willing to give up its nukes under any deal.

As if to drive the point home, Kim Jong Un used the eve of the Olympics to throw a massive military parade in Pyongyang that was highlighted by several huge intercontinental ballistic missiles rolled out in launcher trucks. Analysts say that the missiles, which were successfully flight tested three times last year, could potentially reach deep into the U.S. mainland when perfected. The North also last year conducted its sixth and most powerful nuclear test to date.

In a meeting hours before Friday's opening ceremony, Abe warned Moon not to fall for North Korea's "smile diplomacy" during the Olympics, according to Moon's office. Pence carried a similar message during his trip to Japan and South Korea.

Abe discussed North Korea's nuclear and missile programs and brought up the issue of Japanese nationals who were abducted by the North decades ago when he shook hands and briefly spoke with Kim Yong Nam during the dinner hosted by Moon in Pyeongchang, the Kyodo News service quoted the Japanese government as saying.

After the opening ceremony, the North Korean delegates moved to Seoul and spent the night at the Walkerhill hotel, a riverside facility named after late U.S. Army commander Walton Walker, who's considered a Korean War hero in the South. It was built in the 1960s as a luxury facility for U.S. troops stationed in the South.

The North Korean delegates later Saturday may attend the debut of the first-ever inter-Korean Olympic team at the women's ice hockey tournament in Gangneung. They may also see a performance by a visiting North Korean art troupe in Seoul on Sunday before flying back to Pyongyang.

The North has sent nearly 500 people to the Pyeongchang Games, including officials, athletes, artists and also a 230-member state-trained cheering group after the Koreas agreed to a series of conciliatory gestures for the games.