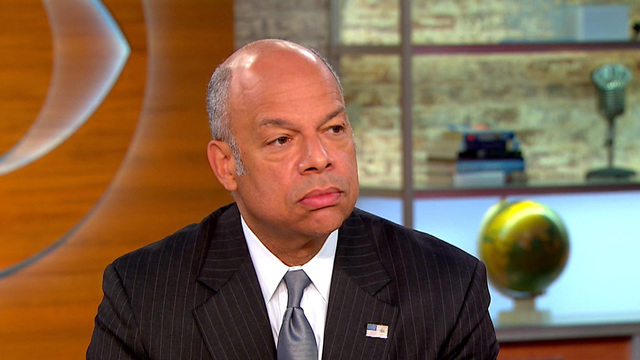 Just days after the massacre in an Orlando nightclub left 49 people dead and 53 wounded, Homeland Security Secretary Jeh Johnson on Tuesday said that gun control is now a critical element of protecting the U.S. homeland and keeping Americans safe.

"We have to face the fact that meaningful gun control has to be a part of homeland security," Johnson said in an interview on "CBS This Morning." "We need to do something to minimize the opportunity for terrorists to get a gun in this country."

On the issue of people on the no-fly list and various other lists being able to purchase a weapon in the U.S., Johnson said, "I believe that that's something that has to be addressed."

Johnson said that President Obama is "frustrated" with the lack of action on preventing gun violence, but he's still "determined."

"I thought frankly after Sandy Hook where you have schoolchildren murdered in a classroom that maybe finally this will be the tipping point and we were not able to move the needle in Congress, unfortunately," Johnson said.

Efforts to make gun laws stricter have failed in Congress over the last decade. The assault weapons ban, for example, expired in 2004 and lawmakers have not renewed that legislation. Democrats on Capitol Hill have grown increasingly frustrated and on Monday evening, shouted down Speaker Paul Ryan, R-Wisconsin, after a moment of silence, demanding to know why the House isn't considering gun control legislation.

"At this stage in the investigation, we know of no accomplices," said Johnson, who reiterated that the U.S. intelligence community believes it was not a terrorist-directed attack, but rather terrorist-inspired.

In order to prevent homegrown terrorist attacks in the future, Johnson said it will require the government and the public to deepen their ties to U.S.-Muslim communities.

"We're going to continue to build bridges to American-Muslim communities, not vilify them and drive them into the corners and shadows," Johnson said.

FBI Director James Comey said Monday that the agency had interviewed the shooter three times between 2013 and 2014 and he was "thoroughly investigated," but the inquiries were eventually closed. The attack is now raising questions about whether the FBI made any mistakes or did anything wrong in their investigations.

"I have a lot of confidence in the FBI," Johnson said on CBS.