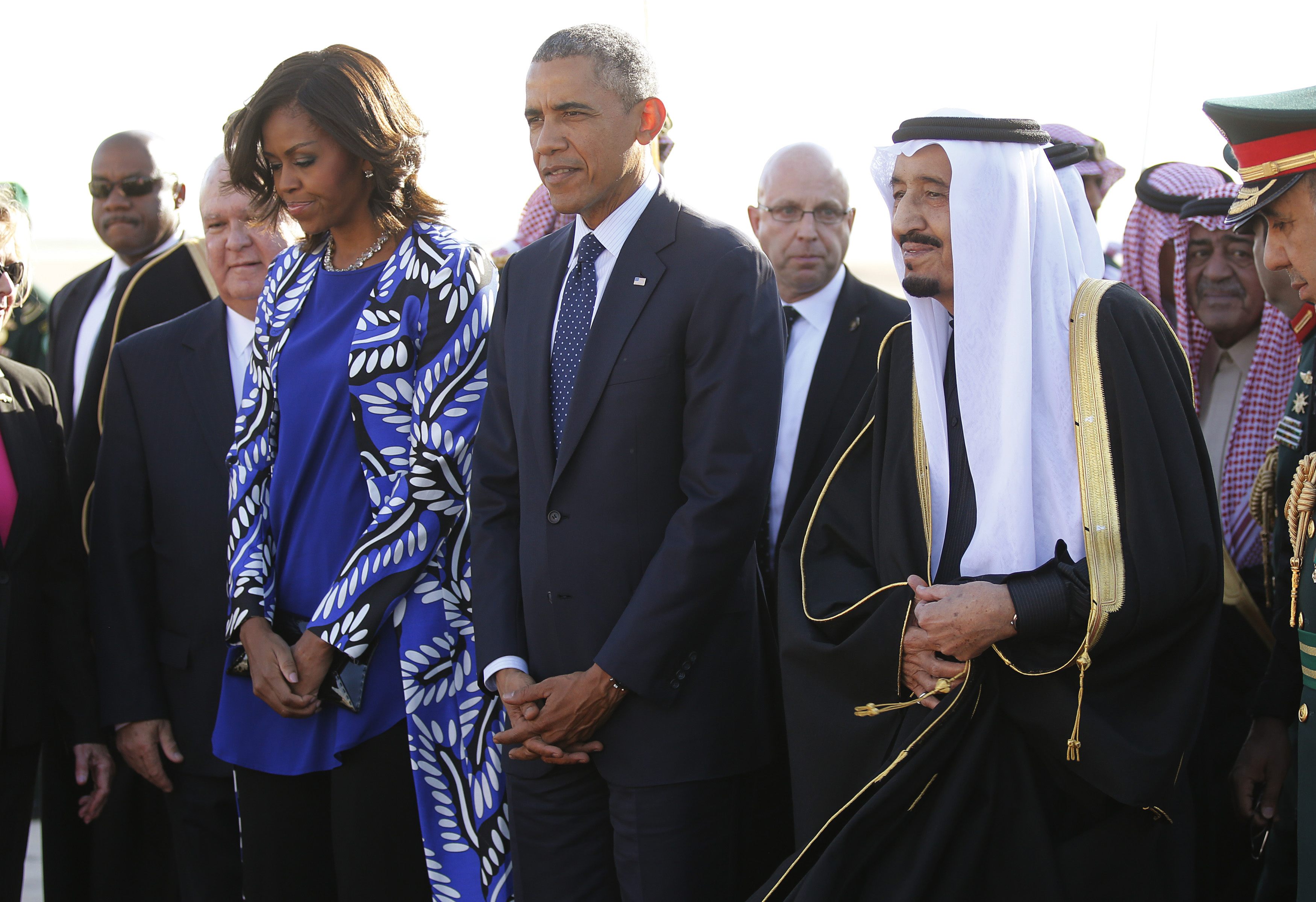 Saudi Arabia's status as one of Washington's most important Arab allies has at times appeared to trump U.S. concerns about the terrorist funding that flows from the kingdom and about human rights abuses. But in his meeting with Saudi Arabia's new king, Mr. Obama brought up human rights only in broad terms, without citing specific cases, a senior Obama administration official said.

Mr. Obama, in a CNN interview in advance of his arrival, said he has found it most effective to apply steady pressure over human rights "even as we are getting business done that needs to get done."

"Sometimes we need to balance our need to speak to them about human rights issues with immediate concerns we have in terms of counterterrorism or dealing with regional stability," Mr. Obama said.

During his brief stop in Riyadh, Obama held his first formal meeting with King Salman bin Abdul-Aziz Al Saud Salman, newly installed on the throne following the death of the 90-year-old Abdullah on Friday. The roughly hour-long meeting focused on a bevy of Mideast security issues - sectarian divisions in Iraq, the U.S.-led campaign against the Islamic State of Iraq and Syria, or ISIS, the precarious situation in Yemen and support for Syrian opposition fighting President Bashar Assad, said the U.S. official who briefed reporters traveling with Mr. Obama on condition of anonymity, citing the private nature of the talks.

Mr. Obama invoked human rights during the sit-down to make the point that tolerance and free speech are necessary to undercut the extremist ideology that fuels terrorist groups. The official said Mr. Obama told the king that it's important to ensure citizens have an outlet to express themselves.

But the president did not bring up U.S. concerns about Saudi Arabia's flogging of blogger Raif Badawi, who was convicted of insulting Islam and sentenced to 10 years in prison and 1,000 lashes. His first flogging took place in early January in front of dozens of people in the Red Sea city of Jiddah, though a second round has been postponed after a doctor said his wounds from the first lashes had not yet healed.

"On this visit, obviously a lot of this is just paying respects to King Abdullah, who in his own fashion presented some modest reform efforts within the kingdom," Mr. Obama said before the visit.

Stepping off the plane earlier in Riyadh, the president and first lady Michelle Obama were greeted by Salman and a military band playing both countries' national anthems. Some of the all-male Saudi delegation shook hands with Mrs. Obama while others gave her a nod as they passed by. Mrs. Obama wore full-length clothing but no headscarf, as is typical for many Western women in Saudi Arabia, despite the strict dress code for Saudi women appearing in public.

Salman formally greeted Mr. Obama and the U.S. delegation at the Erga Palace on the outskirts of Riyadh, where dozens of Saudi officials filed through a marble-walled room to greet the Americans under massive crystal chandeliers. Then they sat for a three-course dinner of grilled meats, baked lobster and Arabic and French deserts.

The U.S. and Saudi Arabia have worked in close coordination to address evolving security concerns in the tumultuous region. Most recently, Saudi Arabia became one of a handful of Arab nations that have joined the U.S. in launching airstrikes against the Islamic State group in Iraq and Syria.

Yet Mr. Obama's presidency has also been marked by occasional strains with the Saudi royal family.

Abdullah had pressed the U.S. to take more aggressive action to force Assad from power. The royal family has also been deeply skeptical of Mr. Obama's diplomacy with rival Iran. But the senior U.S. official said Salman did not express reservations about ongoing nuclear negotiations with Tehran, merely stating that Iran must not be allowed to obtain a nuclear weapon.

In his initial days on the throne, the 79-year-old Salman has given little indication that he plans to bring fundamental changes to his country's policies. He's vowed to hew to "the correct policies which Saudi Arabia has followed since its establishment."

CBS News correspondent Holly Williams was granted rare access to the kingdom late in 2014, and found that while the hundreds-of-years-old traditions which still govern society there -- banning women from driving and seeing convicts beheaded publicly -- remain firmly in place, there are undeniable signs that change is coming.

Williams met female members of the Saudi legislative body who are pushing for democratic reforms, but admitted themselves that the pace of such change was essential to get right, at the risk of dramatic upheaval in yet another nation at the heart of the tumultuous Middle East.

Saudi Arabia's late King Abduallah was credited with bringing a small degree of reform to the nation, and his successor, King Salman, is widely expected to carry on in that direction -- at the same glacial pace.