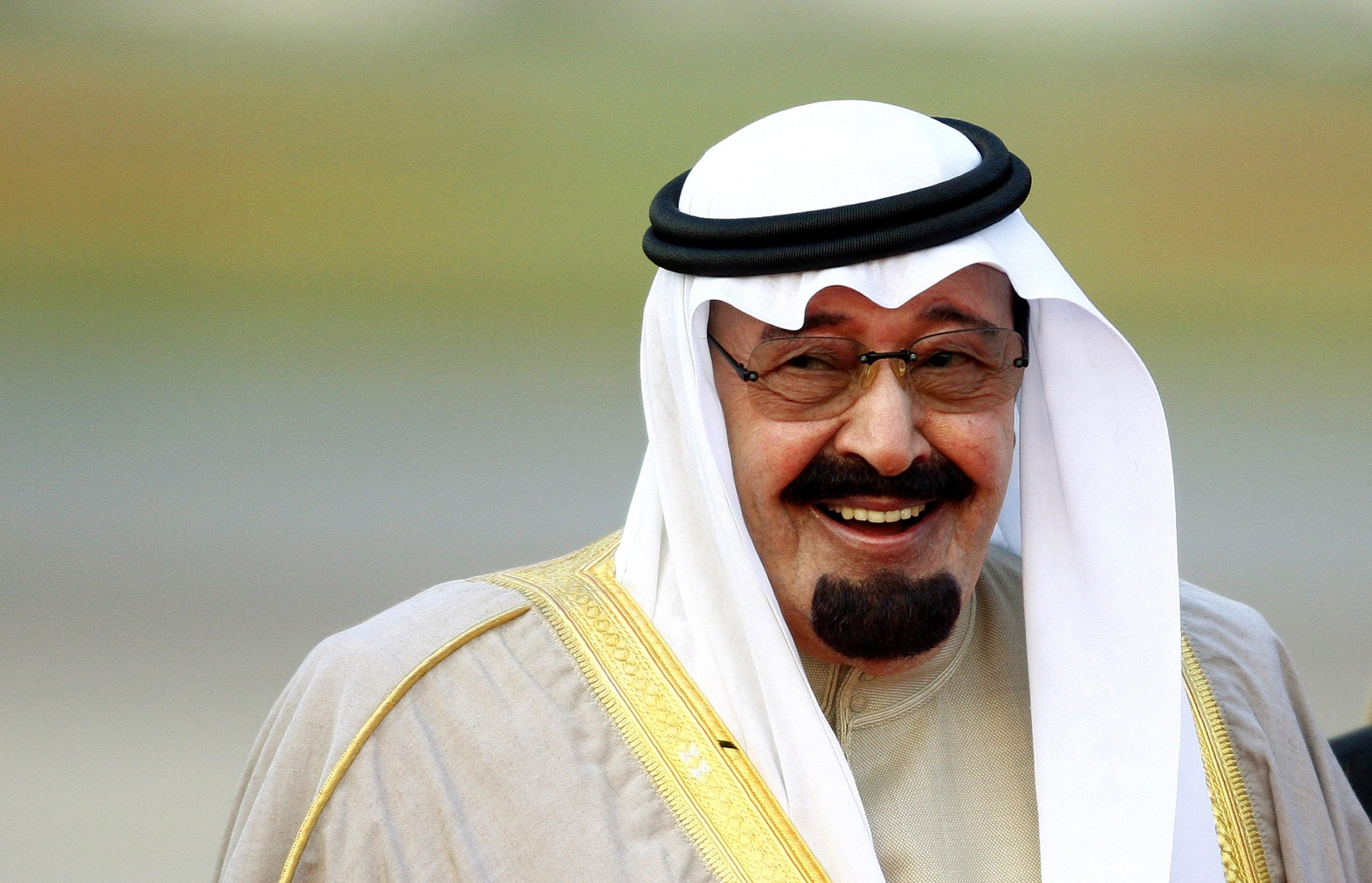 Abdullah's death was announced on Saudi state TV by a presenter who said the king died at 1 a.m. on Friday. His successor was announced as 79-year-old half-brother, Prince Salman, according to a Royal Court statement carried on the Saudi Press Agency.

Salman was Abdullah's crown prince and had recently taken on some of the ailing king's responsibilities. In late December, Abdullah was admitted to the hospital for medical tests. He had appeared during 2014 in a wheelchair and with an oxygen tube. He reportedly underwent surgery in late 2012 for his back.

Following Muslim tradition, the king will be buried within 12 hours of his death and will be laid to rest alongside his father and other past Saudi kings. A source close to the Saudi royal family told CBS News correspondent Margaret Brennan the fact that the king died on a Friday -- the Sabbath -- is viewed as a "good omen."

Abdullah has been a powerful U.S. ally in the fight against al Qaeda and sought to modernize the ultraconservative Muslim kingdom. He was the richest head of state in the world, with a personal fortune of about $20 billion.

President Obama, who most recently met with Abdullah last March, released a statement expressing "my personal condolences and the sympathies of the American people" to the late king's family and the people of Saudi Arabia.

"As our countries worked together to confront many challenges, I always valued King Abdullah's perspective and appreciated our genuine and warm friendship," Mr. Obama said. "As a leader, he was always candid and had the courage of his convictions. One of those convictions was his steadfast and passionate belief in the importance of the U.S.-Saudi relationship as a force for stability and security in the Middle East and beyond."

In a statement, former President George H.W. Bush called Abdullah "a wise and reliable ally, helping our nations build on a strategic relationship and enduring friendship dating back to World War II," and cited Saudi assistance to the U.S. fighting Saddam Hussein during the Gulf War, which Mr. Bush called "a moment of unparalleled cooperation between two great nations."

More than his guarded and hidebound predecessors, Abdullah assertively threw his oil-rich nation's weight behind trying to shape the Middle East. His priority was to counter the influence of rival, mainly Shiite Iran wherever it tried to make advances. He and fellow Sunni Arab monarchs also staunchly opposed the Middle East's wave of pro-democracy uprisings, seeing them as a threat to stability and their own rule.

He backed Sunni Muslim factions against Tehran's allies in several countries, but in Lebanon for example, the policy failed to stop Iranian-backed Hezbollah from gaining the upper hand. And Tehran and Riyadh's colliding ambitions stoked proxy conflicts around the region that inflamed Sunni-Shiite hatreds -- most horrifically in Syria's civil war, where the two countries backed opposing sides. Those conflicts in turn hiked Sunni militancy that returned to threaten Saudi Arabia.

And while the king maintained the historically close alliance with Washington, there were frictions as he sought to put those relations on Saudi Arabia's terms. He was constantly frustrated by Washington's failure to broker a settlement to the Israel-Palestinian conflict. He also pushed the Obama administration to take a tougher stand against Iran and to more strongly back the mainly Sunni rebels fighting to overthrow Syrian President Bashar Assad.

Abdullah was born in Riyadh in 1924, one of the dozens of sons of Saudi Arabia's founder, King Abdul-Aziz Al Saud. Like all Abdul-Aziz's sons, Abdullah had only rudimentary education. Tall and heavyset, he felt more at home in the Nejd, the kingdom's desert heartland, riding stallions and hunting with falcons. His strict upbringing was exemplified by three days he spent in prison as a young man as punishment by his father for failing to give his seat to a visitor, a violation of Bedouin hospitality.

Abdullah was selected as crown prince in 1982 on the day his half-brother Fahd ascended to the throne. The decision was challenged by a full brother of Fahd, Prince Sultan, who wanted the title for himself. But the family eventually closed ranks behind Abdullah to prevent splits.

Abdullah became de facto ruler in 1995 when a stroke incapacitated Fahd. Abdullah was believed to have long rankled at the closeness of the alliance with the United States, and as regent he pressed Washington to withdraw the troops it had deployed in the kingdom since the 1990 Iraqi invasion of Kuwait. The U.S. finally did so in 2003.

When President George W. Bush came to office, Abdullah again showed his readiness to push against his U.S. allies.

In 2000, Abdullah convinced the Arab League to approve an unprecedented offer that all Arab states would agree to peace with Israel if it withdrew from lands it captured in 1967. The next year, he sent his ambassador in Washington to tell the Bush administration that it was too unquestioningly biased in favor of Israel and that the kingdom would from now on pursue its own interests apart from Washington's. Alarmed by the prospect of a rift, Bush soon after advocated for the first time the creation of a Palestinian state alongside Israel.

The next month, the Sept. 11, 2001 terror attacks took place in the United States, and Abdullah had to steer the alliance through the resulting criticism. The kingdom was home to 15 of the 19 hijackers, and many pointed out that the baseline ideology for al Qaeda and other groups stemmed from Saudi Arabia's Wahhabi interpretation of Islam.

When al Qaeda militants in 2003 began a wave of violence in the kingdom aimed at toppling the monarchy, Abdullah cracked down hard. For the next three years, security forces battled militants, finally forcing them to flee to neighboring Yemen. There, they created a new al Qaeda branch, and Saudi Arabia has played a behind-the-scenes role in fighting it.

The tougher line helped affirm Abdullah's commitment to fighting al Qaeda. He paid two visits to Bush -- in 2002 and 2005 -- at his ranch in Crawford, Texas.

When Fahd died in 2005, Abdullah officially rose to the throne. He then began to more openly push his agenda.

His aim at home was to modernize the kingdom to face the future. One of the world's largest oil exporters, Saudi Arabia is fabulously wealthy, but there are deep disparities in wealth and a burgeoning youth population in need of jobs, housing and education. More than half the current population of 20 million is under the age of 25.

For Abdullah, that meant building a more skilled workforce and opening up greater room for women to participate. He was a strong supporter of education, building universities at home and increasing scholarships abroad for Saudi students.

Abdullah for the first time gave women seats on the Shura Council, an unelected body that advises the king and government. He promised women would be able to vote and run in 2015 elections for municipal councils, the only elections held in the country. He appointed the first female deputy minister in a 2009. Two Saudi female athletes competed in the Olympics for the first time in 2012, and a small handful of women were granted licenses to work as lawyers during his rule.

One of his most ambitious projects was a Western-style university that bears his name, the King Abdullah University of Science and Technology, which opened in 2009. Men and women share classrooms and study together inside the campus, a major departure in a country where even small talk between the sexes in public can bring a warning from the morality police.

The changes seemed small from the outside but had a powerful resonance. Small splashes of variety opened in the kingdom -- color and flash crept into the all-black abayas women must wear in public; state-run TV started playing music, forbidden for decades; book fairs opened their doors to women writers and some banned books.

But he moved carefully in the face of the ultraconservative Wahhabi clerics who hold near total sway over society and, in return, give the Al Saud family's rule religious legitimacy.

Senior cleric Sheik Saleh al-Lihedan warned against changes that could snap the "thread between a leader and his people." In some cases, Abdullah pushed back: He fired one prominent government cleric who criticized the mixed-gender university. But the king balked at going too far too fast. For example, beyond allowing debate in newspapers, Abdullah did nothing to respond to demands to allow women to drive.

"He has presided over a country that has inched forward, either on its own or with his leadership," said Karen Elliot House, author of "On Saudi Arabia: Its People, Past, Religion, Fault Lines."

"I don't think he's had as much impact as one would hope on trying to create a more moderate version of Islam," she said. "To me, it has not taken inside the country as much as one would hope."

And any change was strictly on the royal family's terms. After the 2011 Arab Spring uprisings in particular, Saudi Arabia clamped down on any dissent. Riot police crushed street demonstrations by Saudi Arabia's Shiite minority. Dozens of activists were detained, many of them tried under a sweeping counterterrorism law by an anti-terrorism court Abdullah created. Authorities more closely monitored social media, where anger over corruption and unemployment -- and jokes about the aging monarchy -- are rife.

Regionally, perhaps Abdullah's biggest priority was to confront Iran, the Shiite powerhouse across the Gulf.

Worried about Tehran's nuclear program, Abdullah told the United States in 2008 to consider military action to "cut off the head of the snake" and prevent Iran from producing a nuclear weapon, according to a leaked U.S. diplomatic memo.

In Syria, Abdullah stepped indirectly indirectly into the civil war that emerged after 2011. He supported and armed rebels battling to overthrow President Bashar Assad, Iran's top Arab ally, and pressed the Obama administration to do the same. Iran's allies Hezbollah and Iraqi Shiite militias rushed to back Assad, and the resulting conflict has left hundreds of thousands dead and driven millions of Syrians from their homes.

From the multiple conflicts, Sunni-Shiite hatreds around the region took on a life of their own, fueling Sunni militancy. Syria's war helped give birth to the Islamic State group, which burst out to take over large parts of Syria and Iraq. Fears of the growing militancy prompted Abdullah to commit Saudi airpower to a U.S.-led coalition fighting the extremists.

Toby Matthiesen, author of "Sectarian Gulf: Bahrain, Saudi Arabia, and the Arab Spring That Wasn't," said Abdullah was not "particularly sectarian in a way that he hated Shiites for religious reasons.... There are other senior members of the ruling family much more sectarian." But, he said, "Saudi Arabia plays a huge role in fueling sectarian conflict."

Abdullah had more than 30 children from around a dozen wives.