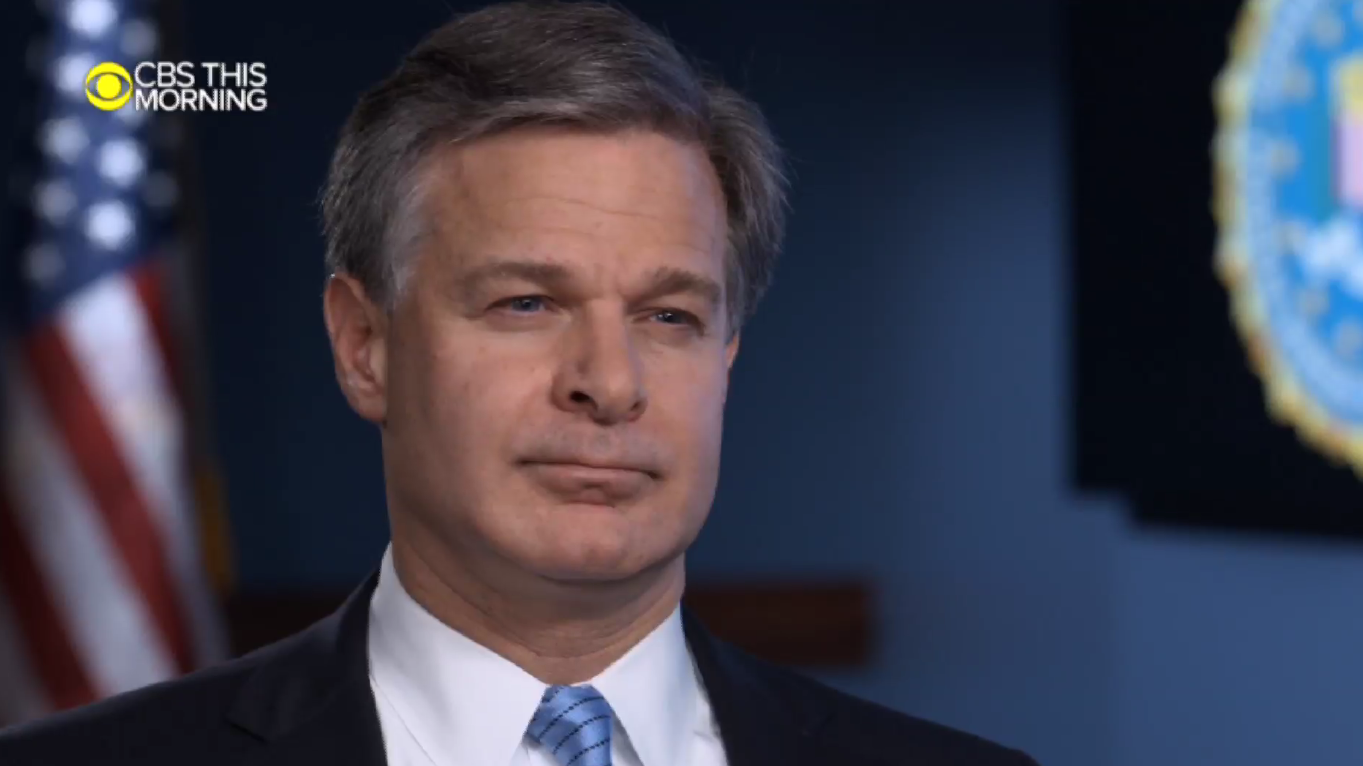 Here are the top five takeaways from their wide-ranging conversation:

1. "I have not seen a nervous breakdown of executive power"

Wray refuted the central premise of Fear, legendary journalist Bob Woodward's latest book documenting turmoil, infighting, suspicion and discord throughout the Trump White House. O'Donnell asked Wray whether he, as one of the Trump administration's top national security officials, had experienced what Woodward described as a "nervous breakdown" of executive power.

"I have not seen a nervous breakdown of executive power," Wray replied flatly. "I have not read Mr. Woodward's book – and I'm not sure whether I'll ever find time," he said.

O'Donnell also asked Wray about the other publication controversy roiling the White House – the anonymous New York Times op-ed written by a current senior administration official – and whether Wray agreed with its contents.

"I try very hard to make sure that my relationship with the president is a professional one -- and that's what I think the relationship should be between any FBI director and any president," Wray responded. "And beyond that, I'm not going to really be weighing in on opinions, especially anonymously-expressed opinions."

He added: "I can tell you that there are lots of ways for people to express their views and their disagreements. For me, the idea of doing it through an anonymous op-ed is about the furthest thing from my mind."

2. China is the FBI's "top counterintelligence priority, and it needs to be"

Wray has previously raised concerns about the counterintelligence threat posed to the U.S. by China. He doubled down on those warnings on Wednesday, telling O'Donnell that "there's no country that presents a more broad and more comprehensive threat to our ideas, to our innovation, to our economic security, in many ways, to so much of our daily lives, than China does."

"[I]t is the FBI's top counterintelligence priority, and it needs to be," he said.

O'Donnell pressed Wray on where, by comparison, Russia ranked as a counterintelligence threat.

"We spend a lot of time working on Russia, too," Wray said, "but…China is our top priority in that space." He told O'Donnell the FBI has investigations of economic espionage by China in nearly every one of its 56 field offices, and that the threat spans big cities, rural areas, and "everything in between."

Wray said China's espionage efforts are being conducted in a variety of ways – from cyber attacks to intellectual property theft to propaganda efforts – and via a variety of actors, including traditional, government-sent agents; "non-traditional" actors like professors, businessmen and graduate students; and telecommunications companies like Huawei and ZTE.

"I think the telecommunications infrastructure is something that we are so dependent on in this country. And the idea of letting the fox in the henhouse is something that I think people need to be really, really careful about before we find out that we're going to regret it," he said.

3. "If there's one thing the FBI is not about, it's poll numbers"

O'Donnell asked Wray about a notable recent development – a steep drop-off in approval ratings for the FBI among Republicans. The results of a Pew Research Center survey released in July indicated that, while overall views of the FBI have been positive, the number of Republicans and Republican-leaning independents with a favorable view of the bureau dropped by 16 percentage points, from 65 to 49 percent.

"Why do you think there are some questions about the reputation of the FBI?" she asked.

"I think sometimes watching the news – and certainly trolling the Internet, you would think that the FBI has only had two investigations over the last three years," Wray said, likely referring to the highly politically-charged investigations into former Secretary of State Hillary Clinton's emails and to the ongoing investigation, now led by special counsel Robert Mueller, into connections between the Trump campaign and the Russian government. The latter has been the focus of fierce and sustained attacks by President Trump.

"I will tell you that, when you get out into real America, people know differently," Wray said. He told O'Donnell he had made personal visits to 43 out of the FBI's 56 field offices throughout the country, and met with 2,500 state, local and foreign partners.

"I've met with prosecutors, I've met with victims, I've met with judges. And in office after office, what I encounter from the people who actually experience the FBI through our work is a very different story," he said.

"And we're not driven by poll numbers. If there's one thing the FBI is not about, it's poll numbers," he told O'Donnell. "We're about the work, and about the people we work for, and that's the American people. That's the victims that we're trying to protect...whether it's kidnappings or terrorist attacks or gang violence."

"That's what we're about," Wray said.

4. "I think Americans can have confidence in our election system"

With the midterm elections fewer than 60 days away – and with national security officials issuing repeated warnings about foreign influence campaigns conducted by Russia, China and others, O'Donnell asked Wray about the state of U.S. election security.

"Have you seen that any voter rolls were targeted or any voting machines targeted?" she asked.

"We are not seeing that in connection with 2018 at this stage," Wray said. "Doesn't mean it couldn't happen at any moment."

Wray added that the lack of evidence that Russia had attacked or intended to attack voting infrastructure does not necessarily mean that its foreign interference efforts are less "severe."

"The use of social media is a bullhorn that allows that kind of information warfare to be inflicted much more effectively," he said. "So that's why it's something that remains a concern, and could influence individual voters if we're not, as Americans, vigilant about who's saying what and where their information is coming from."

"I don't view us as allowing them to do anything," Wray said. "I think we're countering it. We are working hard to counter it."

He told O'Donnell his counterparts at the Department of Homeland Security, National Security Agency, Office of the Director of National Intelligence and Central Intelligence Agency were "focused on it."

"Everyone knows what their jobs are. Everyone's working hard," he said. "I think Americans can have confidence in our election system."

5.     "There is no institution that we're afraid to investigate, period"

O'Donnell asked Wray about reports that attorneys general in several states have launched investigations into potential abuse by priests within the Catholic Church.

"At what point does this rise to the level of a national investigation where the FBI would get involved?" she asked.

Wray, in what he said was in accordance with FBI standards, declined to say whether the bureau would be conducting a particular investigation or not. But he told O'Donnell that, in his view, "there is no victim, no set of victims in this country that are more worthy and more in need of our protection than our kids."

He said the bureau, in the past year, had rescued nearly 1,400 children in the course of investigations of kidnapping and exploitation.

For more from O'Donnell's conversation with FBI Director Wray, tune into "CBS This Morning" on Thursday, Sept. 13.