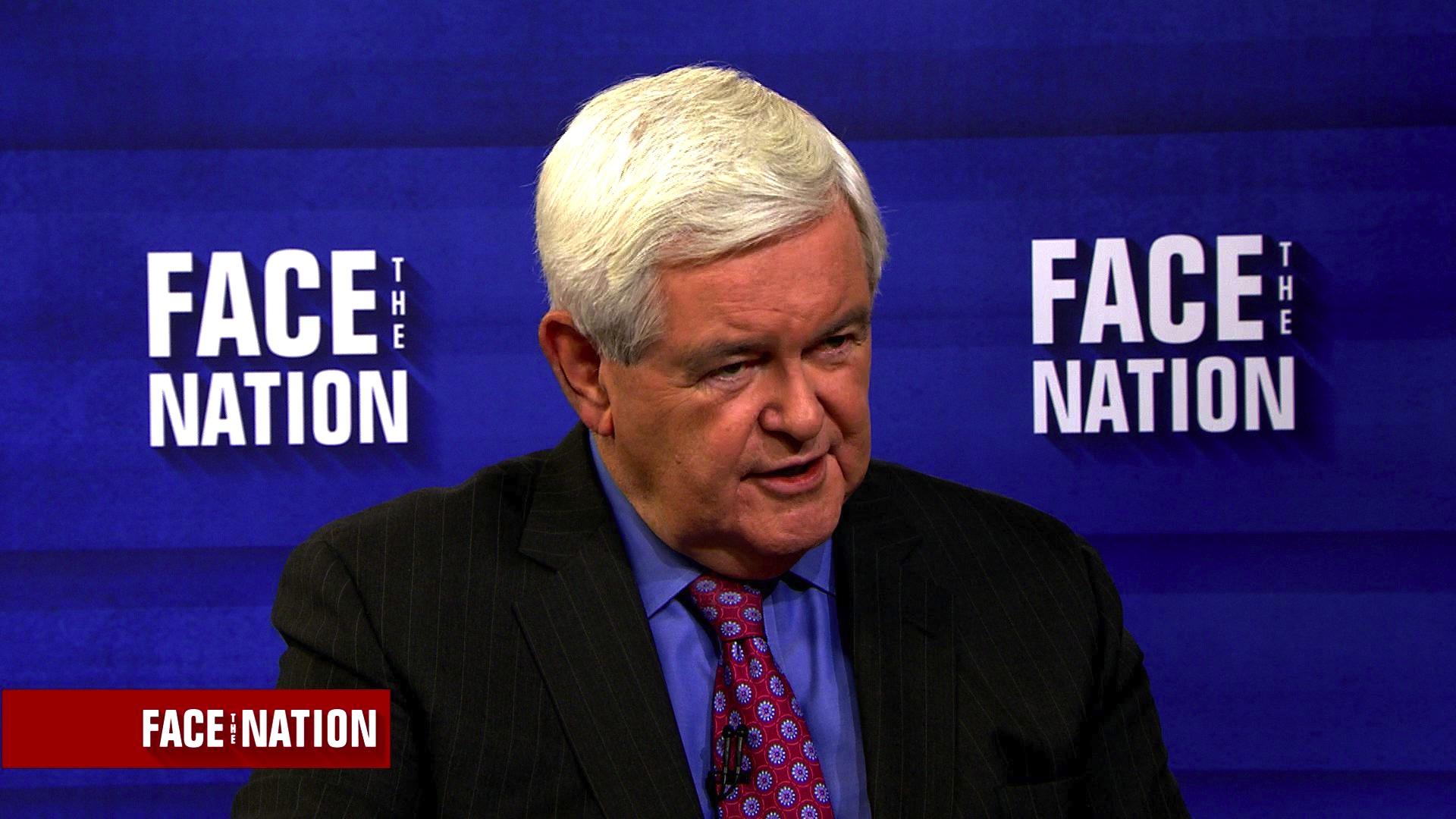 President-elect Donald Trump was elected Tuesday on calls to “drain the swamp” that is Washington, D.C. -- but former House Speaker Newt Gingrich said Trump will need to have a “very, very aggressive” first year in office if he hopes to overcome the entrenched nature of the country’s capital.

“This is a city which if you don’t shove it as hard as you can while you have momentum, they will surround you,” Gingrich, who is a vice-chair of Trump’s transition team, told CBS’ “Face the Nation. “I mean, the swamp doesn’t want to be drained. And the swamp will just suck you in if you let it, so he needs to have a very, very aggressive first year.”

At a time when many Democrats worry Trump does not have the temperament to be president, or to deal with people who disagree with him, Gingrich said Trump’s post-election conduct indicates “steps toward stability and maturity.”

“His victory speech was very conciliatory, very much in the right direction. I think his visit to the White House was very respectful on both sides and I think encouraging in that sense,” Gingrich said. “I think his meeting with Paul Ryan, and with Mitch McConnell, and the fact that he’s integrating Mike Pence so thoroughly, which also happened with Cheney.”

“I think all those things show you steps towards stability and maturity that are very, very encouraging,” he continued.

Gingrich said there’s potential for Trump to compromise with congressional Democrats on certain issues, including infrastructure and tax reform -- and that for Trump, getting support from across the aisle on some legislation is important to their long-term success.

“I think it’s very important that Trump try to have as many Democrats as possible help him do this,” he said. “Because one of the lessons of the Obama years is, if you do things that are big on a purely partisan basis, they’re not stable. I mean, I think Trump wants to change America to make it great again for a generation, not just for eight years.”

That said, Gingrich noted that Republicans’ victories weren’t constrained to the White House -- and said the “shift towards Republican government” in the House and Senate as well as in state legislatures gives him the ability to confidently govern on Republican policies.

Gingrich said he’s not concerned about the fact that Trump lost the popular vote to Democratic nominee Hillary Clinton. If the electoral system had been based on the popular vote, Gingrich said, Trump would have competed in large blue states like California -- and asserted that Trump could have picked up “at least 2 million votes” in California just by competing there.

Gingrich also said the idea that Trump’s rise was aided by racists and bigots in the “alt-right” movement is “garbage.”

“Donald Trump is a mainstream conservative who wants to profoundly take on the left. The left is infuriated that anybody would challenge the legitimacy of their moral superiority. And so the left goes hysterical,” he said. “But the fact is, you know, and you get this with all these smears of Steve Bannon. Steve Bannon is a naval officer. He was a managing partner at Goldman Sachs. He was – he was a Hollywood movie producer. You know, the idea that somehow he represents -- I had never heard of the alt-Right until the nutcakes started writing about it.”

As for Trump’s agenda, Gingrich pointed to an interview Trump gave with CBS’ “60 Minutes” -- in which he outlined his plan to deport 2 to 3 million undocumented immigrants who had committed crimes.

“Well, I think if you listen to the brief section you had from ‘60 Minutes,’ there are going to be substantial deportations,” Gingrich said. “They’re called criminals. I mean, 2 million people would be a lot of people to deport.”

“And if at the same time you gain control of the border, and if you pass a guest worker program, you’d be a long way towards then three, or four, or five years from now dealing with the rest of the folks who are here without legal permission,” Gingrich added. “And I think by that stage we would have accommodated in some way.”

He said that whether Democrats who opposed his candidacy accept him as “legitimate” depends on whether those Democrats want the country to be “a successful venture” -- but said Trump shouldn’t expect to get any help from the “hard left.”

“Well, it’s a question of whether or not you want America to be a successful venture. And I think frankly if you’re hard left, it’s very hard to imagine why you’re going to accommodate a Trump presidency,” he said. “Remember, George W. Bush was attacked from day one by the hard left. Obama was attacked from day one by conservatives. We’ve now been through 16 years of this siege warfare.”

Should Trump continue tweeting, something that has been central (and sometimes damaging) to his image as a candidate?

“My advice to that is to always have an editor,” Gingrich said. “... I mean, look, it’s a technique for reaching 13 or 14 million people at no cost and gets him around the New York Times.”